I posted this on the steam discussions, but reposting here for publicity.

Basically I discovered that when you attempt to move objects that are snapped to grid using the new object tools, and the object in question is at an angle, there will be gaps between the objects and they will become offset.

I tried this with roads and put them at around a 45 degree angle, the road would have a decent size gap no matter if the snapping translation was set to 1 or 0.5, and it was slightly to the left or right depending on orientation. What’s interesting is that if the object is at a perfect 90 degree angle or is basically flush straight with the orientation of the map, there will be no gaps and the snapping will be as it should, it only has an issue with angled snapping.

Update: Apparently this issue affects snapping straight as well, since I just attempted to snap some roads and when working with the Road Tee the Road Line attached to the right of the intersection had a gap, but the left and top roads were aligned perfectly.

Hope this can get corrected, along with terrain smoothing, the og smoothing was more consistent.

Update 2: So this issue is not specific to snapping as I originally assumed and I have updated the title of this thread to be more accurate. Basically the translation (x,y,z movement) of objects as well as the scaling is offset and isn’t lined up with the arrows used to manipulate the object. This causes there to be gaps in snapping which was the original issue, but also causes general translation and scaling to be at a tiny angle, this makes lining up objects impossible because they don’t move the direction you want them to regardless of Global or Local settings.

and it was slightly to the left or right depending on orientation.

This is a floating point/rounding bug, not a global/local bug. Reported it to Nelson around a week ago. It is a known issue.

Hope this can get corrected, along with terrain smoothing, the og smoothing was more consistent.

As for this, there are two types of smoothing, devkit and the legacy smoothing. (I forget which is which, one of them is called Pixel-Average though). If you want the old smoothing, you can toggle to it in editor and choose which you want to use.

This is not the case, I have used both Global and Local and gotten the same results, the directional movement and scaling of objects is just off and doesn’t line up with the direction the arrows are facing, resulting in objects being slightly offset both with and without snapping.

So I found another object issue that I really wasn’t expecting. The other day I used some flat, fake grass objects and everything was more or less leveled perfectly. However, after opening the map today for some reason all the grass objects were tilted slightly, only the grass objects. It’s like I rotated every individual square slightly like a ramp, except this occurred while I was offline, either when I closed the map or reopened it…

fr though how do you even go from a functional system to this, I don’t even think this issue was in the devkit which I would assume is exactly what this is.

So okay after doing more thorough observation this is technically fixed. The problem isn’t as bad is it was, far less noticeable, but it’s still there. All objects seem to move slightly to the right when moving straight leading to this effect. 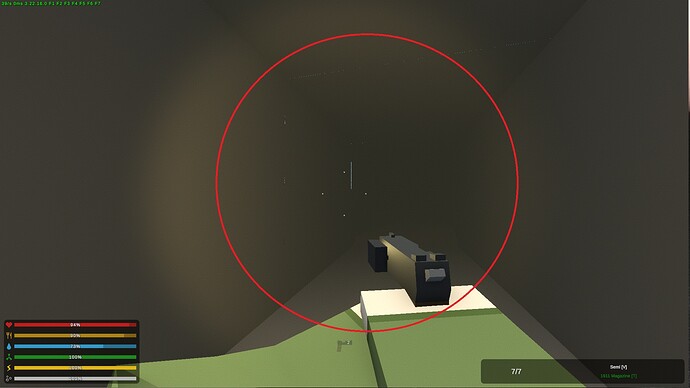