Probably too complicated for this game’s style, but I thought I’d just throw it out there. I thought it’d be cool to see a revamped trap system to give people more creativity and choices on how they can defend their base. 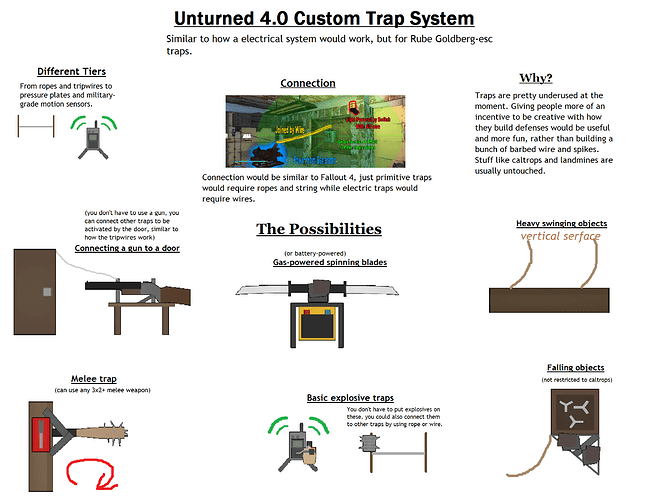 You’d be able to connect traps and explosives to almost anything you can interact with. Crates, doors, lights, etc. Don’t know why you would want to booby-trap your lights, but you could. You could open a door and get hit by a log, or open a fridge to activate some spinning blades outside.
You wouldn’t be able to connect traps to some things though for balancing reasons, like you’d probably need a specific tool or item in order to booby-trap a vehicle, but I’m not sure what would go in this category besides that but feel free to give ideas.

You would be able to see the wires and any explosives you hook up to an object, so you’d want to try and hide it on the side or something. You could disable it, but I’m not sure how to balance that without making it useless or too annoying. It’d look something similar to this, but you’d be able to highlight whatever explosive or trap that is hooked up to it by looking at the trap itself. 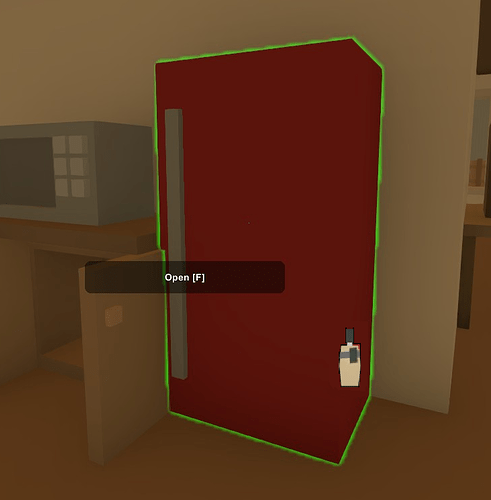 uhoh733×745 125 KB
You can hook up multiple explosives (and multiple of specific traps) to one object, grenades would still have a small delay though. And you’d need quite a bit of rope and wire (possibly even a skill tied to this too.)

There’d also be miscellaneous objects you could craft or find to activate traps and explosives too, like a lever or a button.

But that’s my probably really complicated concept of custom traps! What do you think about it? Handy? Useless? I’d like to hear your thoughts on this.

Yes. However perhaps also add false floors for people to fall into? perhaps rotating floors (place on roofs and whoever lands get flung off), walls that move and crush objects, the 2.0 electric plates and fences (1-shots), hidden sentries (normal mannequins until they spot you), exa.

anyway, raiding bases are to easy, be nice if they were actually challenging.

The idea is miles better then your Photoshop skills.

(i like the idea and your editing is memetastic, don’t improve please)

It’s a cool idea, especially the gun-door-trap, which would be great. Explosive traps would either be too weak, too expensive or too powerful though IMO

False floors would be cool, optionally you could also connect a hatch to a door, or a pressure plate. Moving walls would also be interesting if they also destroyed whatever items they crushed, so you would have to choose with having something that is probably more expensive, or something that’s basically a OHK and destroys items.

Mannequin sentries are pretty silly, but so are umbrella parachutes. But this gives me another idea. If we were able to customize our sentries. Adding camouflage, armor, decoration, signs, etc.

Explosive traps wouldn’t be too powerful, or at least the basic ones wouldn’t be. They’d do as much damage as the respective grenade in the trap, and they’d have a delay. This would also apply to any booby-trapped objects, but you have the option of adding more explosives, and you’d be able to disarm/disable them.

There’s better things to use grenades and explosives for, like making charges. So you’d want to limit yourself on how far you want to go with stuffing a fridge full of makeshift grenades. But besides that I’m not sure what the specifics would be on balancing them out, so ideas would be nice to hear.

I’d love for more traps and sentries in the game.

I like the ideas, but as first think - walls and floors should be more durable to even make traps any “usefull”

Agreed, there should be more of a focus on going through the front door. If you want to go through the walls, then you would need more charges.

For mannequin sentries I though they should look normal (can do any pose/wear stuff) until you come into there vision cone which they start to move and extract a gun from within themselves.

Would love to have more intricate building systems to accommodate these sorts of creations! Intending to have wiring for electrical objects so that feature could be re-used for trap type stuff.

My question is can it kill player in pve if so god dang if not well crap.

Btw nothing can kill player expect for commands.

I mean, no trespassing means no trespassing. Could also be a server option. But it could be abused with people putting tripwires and melee traps everywhere.

Unless traps in PVE do already injure other players, then yeah definitely!

TBH i hate to see trap abuse but this should be added reason is because we need good and player in pve get raided a alot dude you don’t want to know.