Sorry for the 7-month necropost… I asked Molt (staff) & the OP (Molt) for permission to have it unlocked and put on a timer again so that I can post a reply that I already had ready upon requesting an unlock, and even if the reopening was denied would have still been suitable to have gone into an alternative or new thread. Thanks for understanding!

“Snowfox” will be used in the post in reference to the 7.62x51mm Firing Range Gun (FRG). It is not the official name.

The original post set up the basic ideas of how we could design the attachment system. Now, we’re going to expand this idea to long rifles.

This post assumes that there is only one receiver per gun – meaning that all Arctic Warfare (AW) variants and derivatives are fair game for inspiration on this post. 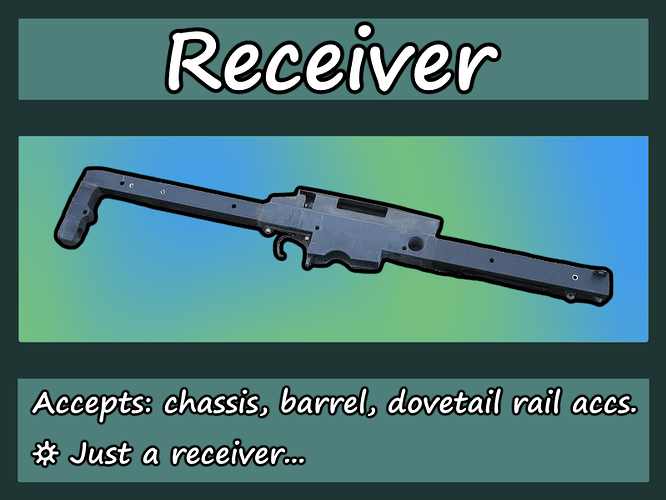 Snowfox Receiver Chart800×600 177 KB
For this post, we analyze the Snowfox as if it could be broken up into several parts. These parts are:

The current implementation of the Snowfox has a permanently-affixed Picatinny upper rail. We will ignore this in favor of it having a Dovetail rail.

To answer the first consideration – “Not in this post.” This post assumes that each long rifle has its own unique chassis to choose from.

This is because the silhouette of a long rifle depends much more on the chassis than anything else, and the reduced customization options compared to rifles like the Eaglefire mean that there’s a much more consistent way they’re assumed to perform.

And speaking of silhouettes – although there are a variety of chassis options, all chassis examples I’ve chosen will have thumbhole grips (rather than pistol grips). This is to keep the silhouette easily recognizable.

Based on the original, classic AW design. It is essentially the currently-implemented chassis for the Snowfox, if it was separated from the rest of the gun. Image was altered to remove the scope, barrel, and cheek pad. The cheek pad was specifically removed for continuity, but also in part due to this being the objectively “worst” chassis and wanting to differentiate it from “higher tiers”. 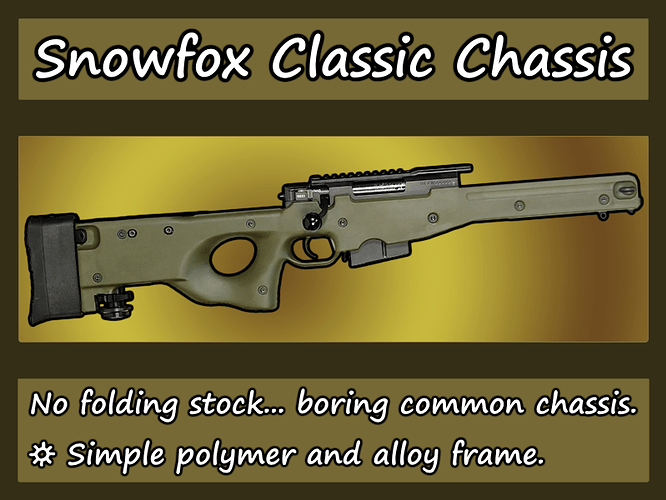 No folding stock. Nothing special about it. An intentionally less-than-amazing chassis so that there can be a common drop for each essential part of the gun.

Based on the AICS 2.0 chassis, with minor inspiration from the ATAICS Stage 2.0 chassis. Slightly modified visuals and color correction. 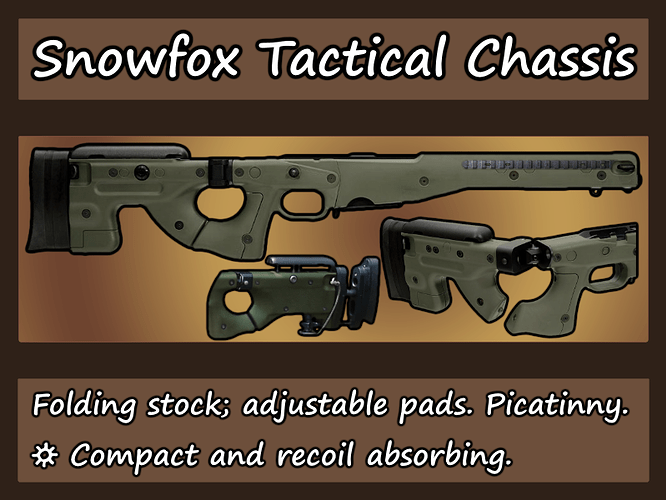 Chassis T2 chart800×600 232 KB
Simple in design like the Classic Series, but with a folding stock and adjustable butt pad (and cheek piece). Improvements that are essential to absorbing recoil, and compacting the design when necessary.

Picatinny rails on the forend, and an integral bipod adapter.

Based on an AXAICS chassis. Manually altered colors, and added a thumbhole grip. The original design actually has a pistol grip instead, but this helps to maintain the general silhouette of the Snowfox. 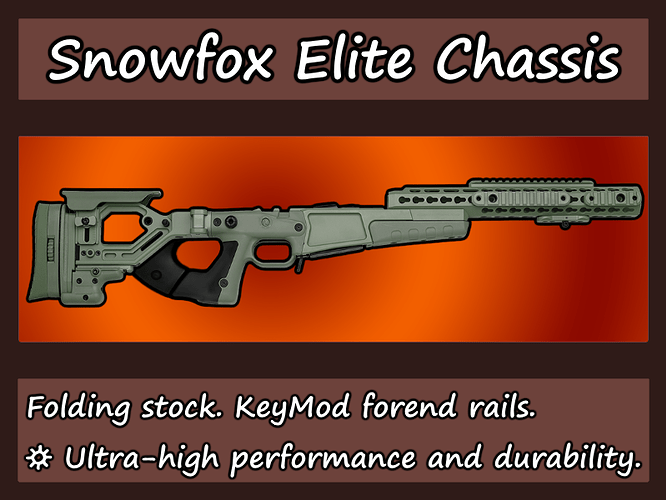 The chassis extends the length of the rifle considerably, making long barrels most suitable. Some barrels may be wide to fit through the forend rails, or there might not be enough clearance on shorter barrels to have a muzzle attachment affixed.

Picatinny rail adaptors could be attachable to the KeyMod slots. The lightest of all chassis.

To answer the second consideration – “Maybe!” When prone, it can be difficult to easily reload. The original mega-post suggestion would have called for kicking up dust, but this suggestion is to just make reloading while prone slightly slower.

The chassis this Elite Series is based on has a cutout on the side that makes reloading while prone marginally easier.

We’re not going to discuss magazines or individual rail attachments, so this is the last major section.

Unlike with the chassis, barrels aren’t inherently essential the gun silhouette, so these examples are named more generically (without a specific gun or caliber mentioning).

Barrels have been suggested as a way to allow changing between calibers, but for the sake of the post we won’t touch on that. Instead, let’s look at the third consideration – “can ‘less’ […] be ‘more’”. 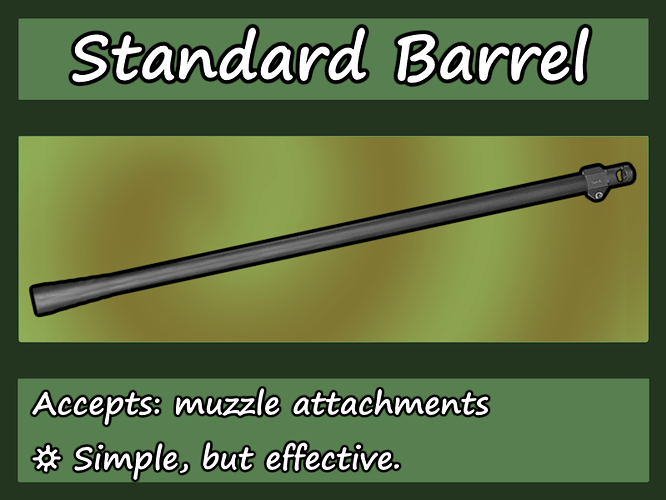 Standard Barrel chart800×600 123 KB
Simple, but effective. Easily affix a muzzle attachment to the end of the barrel component. Nothing fancy, but so many options on what to affix to the end! 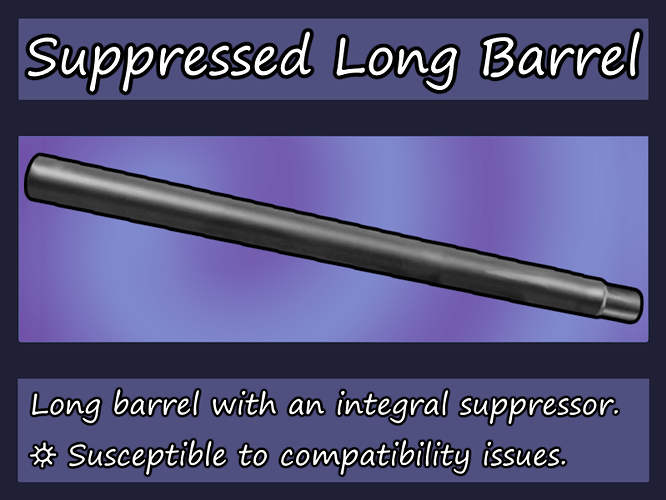 Suppressed Long Barrel chart800×600 146 KB
A long barrel with an integral suppressor. Muzzle attachments cannot be attached, but why would you need to? Maintenance is easier, even if you’re stuck with a larger, less versatile, barrel.

The barrel alone is far more durable than any muzzle attachment would be, and so by giving up the ability to have muzzle attachments means nothing when upkeep is just required on one, sturdier part.

Snowfox is a good name. I’d like to see different barrel lengths though, so I can make a…“pistol” similar to the Remington 700CP. 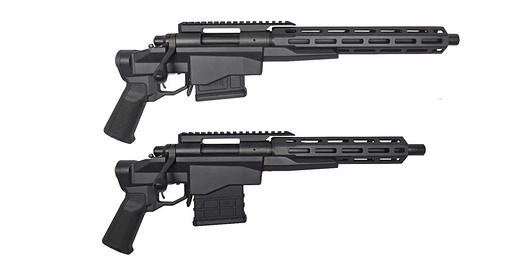 The only thing that beats those “pistols” are “firearms”

The only thing that beats those “pistols” are “firearms”

The DX-12 Punisher Glock-styled double-barrel shotgun pistol would like to have a word with you.

I’d like to see different barrel lengths though, so I can make a…“pistol” similar to the Remington 700CP.

Obviously compactness and draw speed and all that would be a benefit of players that do this, but what would you do to balance the damage output of high-powered rifle rounds coming out of a… “pistol”?

I’d alternatively ask “how would you keep pistols relevant?”, but I think that one would be explainable as just letting them getting modified more “properly”, or by letting them have stuff that makes them bigger (like how you could have barrels that let your sniper by smaller). For example – carbine/PDW conversion kits.

Massive muzzle flash, terrible recoil control.
And more awkward bolt animations, since you have to work it with your left hand or switch hands.

you have to work it with your left hand 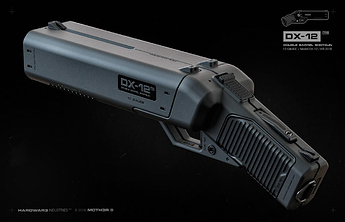 For your overwhelmingly monstrous behavior, you have become vilified by the community.

was talking lgeal terms, no atshetics. Blocky and cyberpunk, probably arkward as fuck to gold since “lol angular grip”.
Shockwaves work fine tho, this won’t be much worse.

The rule of cool, why else?

Amazing, I totally agree with the fluff content part. That to me is what makes the best games, things on the side you can invest your self into that just good additions to the game. If everything on here is in the game I believe U2 will get a whole lot of attention from people who may not be in the community or into survival games with all the gun attachment options…Also just got done reading the excursions thread and wow, if this game comes out with just a fraction of these ideas I am going to quit my job and never stop playing.

Because have fun holding on to the action without one, let alone aiming the thing properly.
Anything more than 10 meters and you won’t be hitting much with most loads, plus I’d be inconvenient as fuck to reload.

In the case of the DX-12 that’d be stupid anyway since it very much seems to be made to be used one-handed. Now I personally have never seen break action doubles barrels with front grips, but if you don’t feel like holding onto the barrel or can’t for whatever reason I don’t really see why you could not add one.

A frontal grip on a break-action sounds like cursed image material.

Implementation of Inventory Weight and its Potential Punishment

On U4 trello I saw animals may be able to be tamed and used to ride or possible fight for you. If that is the case I would love to see the ability to craft a wagon and attach to a horse to be able to carry large loads. Maybe 1 horse for a tiny Gandalf style wagon or if your lucky to find 2 horses a larger wagon that could haul more weight.

Would be useful for early game before you get access to cars and want to transport goods, haul raid loot, or simply farm up.