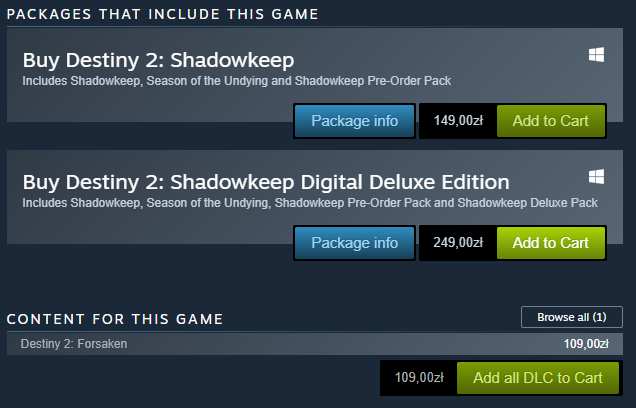 This is now a bruh moment.

It really is free! and not some weekend only event!

one: that is a dlc

The currency in question is the Polish Zloty.

I realise it’s a DLC and I will feel robbed if I play a game to discover I need to buy some hijinx to get extra content. As mentioned it’s 249 not 249k, and it’s way too fucking much for any DLC, that’s more than a price of AAA game.

it’s way too fucking much for any DLC, that’s more than a price of AAA game.

The only reasons I wouldn’t want to play $30+ USD for an expansion is because they still use elements from the base game, and for some games it feels like paywalling what should’ve been normal content.

WOTC easily adds another 50 hours of playtime with the first playthrough, which is in part due to the nature of XCOM, but during that entire time you’re playing with new content too.

I would assume that Shadowkeep has upwards of 20 hours of content, but that’s likely more applicable for those playing as a completionist. I personally like to base part of a game’s value on hour–cost ratio though.

Poland uses commas instead of periods for cents, meaning it’s only about 240 Złoty. Z’s are short for Złoty, the currency of Poland and is roughly 25% of a US Dollar. Doing conversions the DLC is roughly worth 60 dollars.

play both of them

I don’t think anybody has time for that.

Hey actual destiny player here, I have been playing since 2014 and have heard every complaint in the book (some i agree with, some i dont), and the most common ones I hear have all been fixed in the latest update. most activitys arent expansion locked anymore, all players can do most of the fun stuff out of the box as of the latest update. The latest expansion is merely story and quests and all the other stuff is included within the current “season” of content. Not even locations are expansion locked you just cant do missions tied with it. The expansions are pricing scheme are vastly changed as of the activision bungie spilt - Instead of buying a 60 dollar expansion and then a 50 dollar season pass and then another 60 dollar expansion, It is a 25 dollar expansion and a 35 dollar expansion that comes with the season pass.

How destiny expansions work is the content within is dispersed as according to each expansion, So out of the box (on launch) there is a bunch of new stuff, namely a new location, set of missions, a story mode, and typically a raid etc. and then more stuff like quests and activity’s are added over time during that updates run. Destiny is meant to be a live service game, one you return to over time. So its less like 20 hours of content and more like 20 in the first week and then a bunch of smaller sessions over a period of time or if you play weekly - an actual fuckload of time.

Some people prefer destiny, I personally didnt like what I played of warframe and prefer destiny. Anytime I talk about destiny and hear the ol’ play warframe instead I just end up tuning them out because its just annoying at this point - it might just seem like a game suggestion but when you hear that literally everytime you say “I play destiny” it gets annoying. I personally tried it out to see what all the fuss was about and didnt like it.

It really is free! and not some weekend only event!

The base game (and the first two expansions technically) are now free to play as of the ‘New light’ Update. Which vastly improved the new player experience and allowed the choice to not play the campagins and jump right into the content aswell as many other fixes and changes to allow new people to get into the game much easier without the annoying homework you used to have to do. It also added cross save so you can keep your characters across multiple platforms.

Honestly I really like destiny, its a fun game I play a bunch with my friends and Im even in a clan that raids a bunch. Raiding is an experience that I havent seen another game like destiny do as well as destiny does. Theres even a new raid coming on the 5th where if you beat it in 24 hours you get some bragging rights cosmetics in game. Destiny does this cool thing where they have merch that you can only buy after completing certain in game big boy stuff; for example if you beat a raid within 10 days of its launch you get access to an exclusive jacket themed around the raid. I love building my character and going crazy with the nutty build I just made in the pvp modes n junk - it really is a solid time if you got peeps to play with, which shouldnt be an issue cause its free now. You can do pretty much all the raids out of the box now, and I mean out of the box you can just download it and play a raid right away if you got the people to do it with (i mean i wouldnt reccommend it, get a gun first - but you get the point)

Ever since bungie started self publishing they have been extremely open about pretty much every aspect of the game, even releasing a college essay length blogpost about stuff they fucked up on and how they plan on fixing all of it aswell as talking about where they want to take things. So honestly I have faith right now, the new content has been great so far and I am having a great time with it all. Game isnt for everyone but I do suggest grabbing a pal and giving it a chance - you never know you might end up liking it as much as we do

Some people prefer destiny, I personally didnt like what I played of warframe and prefer destiny. Anytime I talk about destiny and hear the ol’ play warframe instead I just end up tuning them out because its just annoying at this point - it might just seem like a game suggestion but when you hear that literally everytime you say “I play destiny” it gets annoying. I personally tried it out to see what all the fuss was about and didnt like it.

they are pretty different