Currently it’s pretty easy to tell NPCs apart from players since they usually only appear in one location, have unique animations, and don’t move around. After reading some of the suggestions for npcs for II i’ve found it would be pretty difficult to tell them apart from players. I was thinking maybe some sort of symbol above their head (like in the sims) so we could see from a distance that they aren’t players

This seems a bit unimmersive, and kinda ruins the point of having NPCs sneaking about if we’re going to easily be able to identify them based on floaty-things giving away their position. 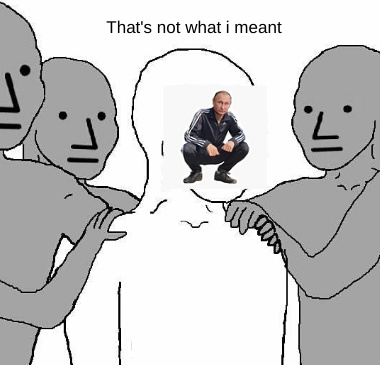 I think that to realize when you encounter a player or NPC you could only notice because of their behavior and any possible interactions, being these hostile or not. Making NPC’s predictable could be a bit uninmersive and would also kill the uncertainty wether you have to be friendly or hostile a tad.

Its equally unimmersive to play the game, think you run into another player, and then its just a NPC derping around, missing all his shots and doing dumb, obviously inhuman things. There is no way to make a bot unpredictable. (excluding some fancy schmancy ai learning)

Ofc bots can be predictable, but as I’ve said, based on their behavior, rather than their looks. But ofc, NPC outfit should be indicative enough to tell if you’re looking at a neutral or hostile NPC

You say that from your experience with shitty AI’s from other survival games, yet it isn’t naive to work for AI in UII to be better than that (and with “work” I mean proposing or directly implementing solutions).

I’ve just been disappointed too many times : (

Well, Nelson isn’t concerned about getting it out super quickly. Maybe he won’t make the same mistakes?

I definitely think special uniforms for hostile npcs will make them fairly unique and easy to pick out on their own. Past that, if you’re too stupid to realise the 10 guys firing at you with medium accuracy aren’t players then that’s your own fault.