Just wondering if I could get unbanned as it was a harmless joke by saying I’ll get my militia in here, and actually getting 3 people to just come in and chat saying weird things but weren’t rule breaks and I told them specifically to not break the rules but still got banned for I guess breaking tos, but clearly I’m pretty sure it’s for HUGE toxic raids with bots/people who just raid to start hate and drama. That doesn’t excuse my “Discord Tos” break but there is context and degrees that things fall by and I honestly do think it wasn’t that big of a deal for me to get perma banned from this discord, and I’m sincerely sorry about whatever I’ve stirred by doing that. Hopefully I can get a second chance!

Raiding is an instant and permanent ban, no questions asked.

Hopefully I can get a second chance!

Well I didn’t know it was against tos in the discord rules as I haven’t read them (But will be now), and I’m guessing you’re disregarding what I said with context and degrees. I don’t understand why you’re giving me an indefinite ban for something as petty as me getting THREE people to just type in chat about a militia (ABIDING by the server rules btw) and you just say I’m raiding the server? This is legit my first ban and you’re just denying my appeal without even understanding, and btw do you think that’s actually justified? Even in the court of law theres a JUDGE who judges whether it’s the offenders first time, or repeat offender, the circumstances, etc, because Judge’s don’t just have a set time in which they jail people in prison for because there is CONTEXT, and you’re a judge in this situation currently, and as a judge I just don’t see you doing your job correctly… you’re just straight up denying my appeal because you have a grudge on me for who knows why. I think you should act more unbias towards people you dislike and learn how to handle people correctly with context and the situation. Can I please have another opinion and if you guys have the both opinion so be it I guess I’ll be Indefinitely banned for such “bad behavior”.

It doesn’t matter if it was 3, 30 or 300 people, raiding is raiding.
You invite people in a public server with the intention of trolling, that’s considered a raid.

That is your problem, alone. The rules are always clearly stated and required to be read.

I am not sure what this “context” you are speaking of. It is all there. We enforce the Discord TOS (which every user that has discord has agreed to, even of they have actually read them or not. You are still subjected to be punished if they are broken either way). In this case you have broken the Discord TOS and that is an instant permanent ban from the Unturned Official Discord. As far as raiding, it doesn’t matter if it 1 or 100 people or more. The act of raiding is when a user tries to cause chaos or conflicts within a server (in which reason may be a user was punished for breaking said rules in which they are responsible for and now are upset they are being punished for their own actions). Telling other users, even three of them, in which you classified as a “militia” to come into the server to “type in chat” would be indeed classified as raiding. Discord TOS nor does Unturned Official allows this type of behavior. It is very childish and immature. Your friends who you said abided by server rules actually in fact did not as they helped conduct the said “raid”. Also not reading the Discord TOS is not an excuse for breaking it. I hope this was all clear and your appeal has been seen and it will be reviewed by the Unturned Official Staff Team. If you appeal is accepted then you will be notified. Thank you and have a nice day. If you have further questions you can contact me by discord as well (wolf_maniac#6036).

Ok so first off everything you’ve said this in reply was everything I knew about except you didn’t know what I was talking about and was pointless. In the form of banning me for “raiding” I totally understand you have to enforce those rules right, but when I’m appealing the person who banned me should take a good look at the CONTEXT and DEGREE’s because this is a very hard punishment and he should probably look over the main clue in which it led him to ban me because just look at these two different scenarios and you tell me which one should be actually banned indefinitely and which one should be pardoned; Somebody who sent 200 people/bots to spam chat with harsh words and actually meant ill-intent towards the server, or somebody who meant this as a joke bringing 3 people in to abide by the rules talking about a militia in chat. You see the difference in the context by one person doing it to cause harm and another person doing it as a harmLESS joke, and btw I am sorry for whatever stir I’ve caused by doing that but I’ve never mentioned me not reading discord TOS for an excuse I simply said it because if I did read it I wouldn’t have did what I did, so from now on I’ve read the discord TOS so nothing like this ever happens.

There’s a saying called “ignorance is not an excuse.”

Also, you’re only making this worse for yourself, I don’t think mods are going to take kindly to someone telling them how they should interpret the rules.

You’re already past denial and anger and went straight to bargaining, I suggest you go to acceptance.

Lemme just grab these then… 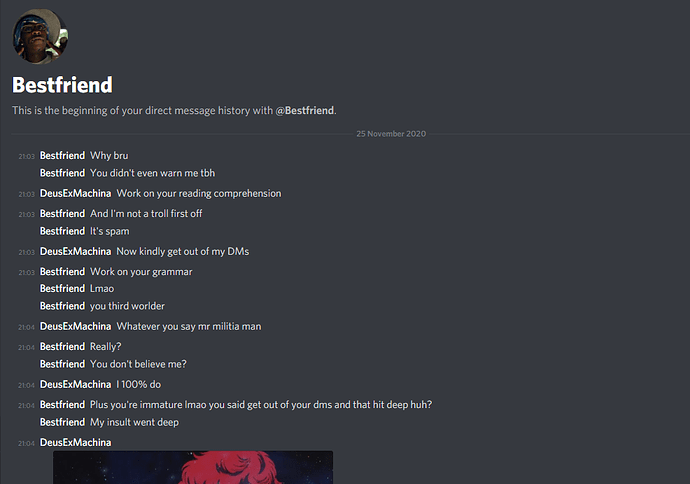 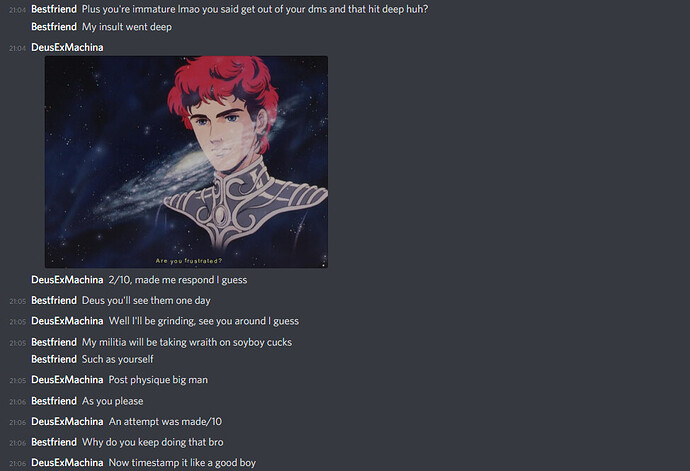 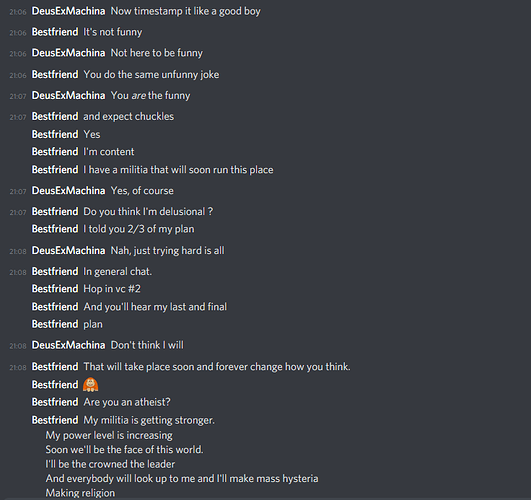 Apparently you can’t hide details on image embeds so eh.
Or just have the text dump if you don’t feel like reading images.

Even if you are sorry (which based on your past actions I find hard to believe) I am with RedComm on this one, best be moving to acceptance because this is not going to get better by you making excuses and typing up a wall of text with little to no relation to the issue at hand

Reread my whole statement then reply again, and what Denial and anger was there lmao?? I don’t think you’re understanding the full situation you’re just giving you’re two little sense, that’s why people who AREN’T apart of the situation shouldn’t reply.

If anything lmao that just shows it’s a troll/joke and you should have blocked me instead of continuing to type back.

If anything lmao that just shows it’s a troll/joke and you should have blocked me instead of continuing to type back.

Ah yes, of course. So are you going to go for the “merely pretending” or the “lol ur fault because you didn’t block?”. approach? Hell the DMs are not even what got you banned since we basically do not moderate those. They do however help illustrate just what we are dealing with here.

Reread my whole statement then reply again, and what Denial and anger was there lmao??

How about the entire wall o text about muh context and muh degrees?

Let me paraphrase this

If you don’t agree just shut up

That is not how discourse works, and this being a public category he has every right to show you just how stupid this makes you look.

No it’s common sense, if the person wasn’t apart of the situation he shouldn’t be giving his insight period. That’s literally on every appeal forum out there lmao??

Yes dude so me saying I’ll be the face of this world and I’ll be the crowned leader making a religion to create mass hysteria was all NOT pretending? Jeez you must be gullible bro.

Or he must care about upholding the rules you seem to disregard the existence of. “Hey bro, it’s just a joke” isn’t going to help you out no matter how much effort you put into complaining.

This whole time I haven’t seen you formulate a coherent argument at all. Essentially your entire argument for why you should be unbanned is “it’s just a joke bro, don’t take it too seriously, I didn’t know, just trust me it won’t happen again.”

You’ve attempted to compare Discord to a court of law, however that’s an incorrect analogy. Private companies are not required to uphold things such as habeus corpus and concepts such as innocence until proven guilty. You’re also attempting to chalk this up to the mods being “biased against you” and proceed to self-righteously explain to a moderator that they should be more open minded and to judge things more accordingly to context.

After being banned you’ve proceeded to just annoy Deus in DMs about some completely cracked shit about getting a militia that will run the Discord (Seriously, why do people think they have a chance to go against the people who have the power to ban them? What are they going to do? Ask nicely for perms?)

And as for the whole “denial and anger” thing, it’s this little concept called the five stages of grief. The full list is denial, anger, bargaining, depression, and acceptance.

Let’s see, denial… venting your delusions about a plan to create a religion and take over the server… okay Mr. God Complex.

Hmmm, anger… well, you’re lashing out at me for apparently “not understanding the whole situation” (Also for someone who criticizes people for grammar you sure have problems telling the difference between too and two, just saying).

And now you’re on bargaining, “just trust me bro it won’t happen again.” Yeah, judging from how this is playing out, I think it’s safe to say it won’t.

Oh yeah, also you tried to do the exact same thing two days ago trying to throw shade on Deus. I’m surprised Molt or Yarrr hasn’t shut this down yet.

But as the saying goes: 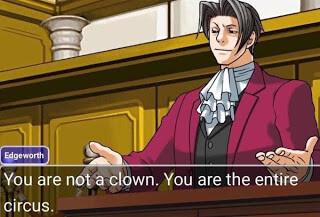 Seeing how you failed to remain rational during your mute and continued to make sly remarks as a form of appeal before your ban, I have little doubt that kicking you and your friends off the server was the right call made by the relevant moderator.

The addition of your lack of acknowledgment of raiding not being allowed in your previous thread before going for the ‘It’s just a joke’ excuse here makes it very unconvincing that you are genuinely willing to come back. For your information, the rule you break that ‘Raiding’ belongs in are:

Since your appeal is denied by the responsible moderator along with the fact that your first thread was closed, I’ll have to close this as well.