One of the big problems I’ve always had with Unturned was weapon durability. Usually rifles and other firearms are rated to fire tens of thousands of rounds before needing replacement parts, and attachments such as muzzlebrakes and compensators for years.

An alternate system would be to instead increase focus on cleaning and maintenance instead of straight up repairs and replacements, with the durability decreasing based on maintenance instead of rounds fired. The same would apply for melee weapons, as katanas often lasted for centuries and were rated to cut cleanly through flesh and bone.

Absolutely agreed,3.0’s weapons just feel so weak in terms of durability and long term use.And if 4.0 has scarcer weapon spawns,keeping 3.0’s durability system would be a big no no.

The exact number of rounds a part can last is tweaked for balance and to fit the scale of the game. I don’t really see why cleaning a weapon and replacing it’s parts would be mutually exclusive.
I wouldn’t mind if weapon cleanliness were a factor in-game (probably as something that could be disabled,) but the problem with the 3.X durability system was that it was so simplistic and tedious, not that it wasn’t realistic enough. To me, it would be more important to have maintenance be about how your barrel is constantly losing accuracy and you have to decide when its accuracy isn’t acceptable anymore and whether or not the reliability on that one magazine is still acceptable (maybe only fill it halfway from now on or maybe it’s time to scrap it.) than it is to reskin the blowtorch as a cleaning rod and the scrap metal as cleaning patches and lubricants.
I do agree that flash hiders and muzzle breaks shouldn’t be as drastically affected by normal shooting as they were in 3.X, but I would like to point out that a large reason why they are so overbuilt is because many of them are designed to function as grenade launching spigots, which I’m pretty sure would put more stress on them.

allright i accept your suggestion

But tell-me more about repair replacements.

Maintenance could help reduce the degradation of a part’s durability until the durability is so low that maintenance isn’t just worth it.

Katanas werent made good. They were trash and usually a backup for samurais if their main sword failed them. They easily broke.

But anyways, the 3.0 system is really annoying and unrealistic. Guns last for a very long time but I think if treated poorly (not just used, such as swimming in mud) they should jam. Also make some guns able to go underwater and work again on surface and some not.

My dude.
Katanas were the main sword.
The samurai were given two sets of daisho, or “long-short”, with one being the Tachi and Tanto, which was usually used for battle, and the other being the Katana and Wakizashi, for everyday carry.
The forging process was known as tamahagane, and folds multiple layers of hard steel and softer iron into a masterpiece of a weapon. 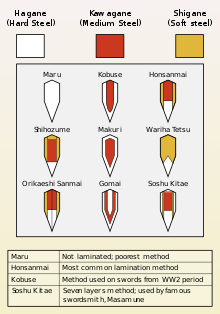 Western historians have noted Katanas and other contemporary swords as some of the finest cutting weapons in military history, even able to slice inferior weapons in two, and were measured in their ability to slice through flesh and bone by testing them on the corpses of executed criminals. A good blade would easily be able to slice through a stack of three or four corpses in one swing.

I don’t know where you got your sources from, but they’re wrong.

Katanas, and other Japanese swords of similar construction, are not as optimized for making the best cut as possible as many people believe, but they do have characteristics that aid in making a good enough cut, even though other swords theoretically could cut better.

Even a glance at a cross section of a katana would reveal that they’re really wide and steep for a sword that is specialized in cutting, and would have to push more material at a time out of their way.

“But wait,” say the katana fanboys, “their wideness makes them stiffer.” Breadth of a blade keeps it from flexing away from it’s target, meaning less energy is wasted flexing the blade. Width keeps the blade from twisting to the left or right and being deflected, but with a good grip and good edge alignment the forces twisting the blade to the left and right should be almost equal, and with perfect edge alignment, there would, hypothetically be no more force pushing it to the left or to the right than there is to the other.

“But katanas are curved,” the katana fanboys desperately retort. Curvature of a blade only aids in cutting capacity, because it can lessens the amount of blade that is being forced in at a time. The curvature of a katana is so minimal that even when performing a draw cut it causes negligible difference in cutting performance. The slight curvature of Japanese Katana-like blades or of European sabres isn’t enough to greatly increase their ability to cut, but does aid in edge alignment, because similar to a wiffle ball, the trailing side will naturally tend to stay as the trailing edge and the leading side will tend to stay facing forward.

“But katanas have hard edges!” The katana fanboys say as their last defense. A hard edge does not mean that edge will be sharp, it just means that it will be easier to keep sharp. Even a piece of wood can be made dangerously sharp, it just generally wouldn’t be durable enough to stay sharp after much use.

Scientifically repeatable tests --as opposed to unscrupulously repeated tales-- only show katanas as able to cut through a thin, flat, piece of mild steel that is held securely in place, not cutting through other weapons and certainly not if the other weapon is in someone’s hand, where it would be moved away rather than deformed or broken.

and were measured in their ability to slice through flesh and bone by testing them on the corpses of executed criminals. A good blade would easily be able to slice through a stack of three or four corpses in one swing.

This sounds cool, but basically no other sword design is put through these tests to compare, and cutting through carefully aranged bodies, at carefully selected points, with carefully selected techniques, performed by carefully selected professionals is not equivalent to some random account of some random person getting their sword stuck in real combat with bodies positioned in ways that they didn’t choose that are probably wearing atleast somewhat protective clothing, and were struck at the point that was available to be struck at that moment, rather than the area that experience had shown was a good place to cut through.

Eh.
In all reality, I don’t give a fuck.
If it can kill someone in one hit, and is reasonably confortable to hold, and also is somewhat aesthetically pleasing, that’s good enough for me.