If Unturned II came out on Steam

Who would be moderating the steam forum

Probably the same staffs from earlier.

How about we don’t have a Discussions forum for 4.0

I would kill to have that power!!! ( * - *)
Because I wanna come up to 12 year olds, tell them to shut up and they’ll actually follow my orders

Jokes aside, i really wanna be a moderator!

Unturned II? Isn’t it Unturned 4? Why would we call the 4th installment #2?

Because it’s an entirely new game on a new engine. It’s also confirmed to be a separate game in itself from Unturned, unlike the previous versions which were pretty much just an update from 2.x to 3.x.

EDIT: It’s also worth mentioning that Unturned II is designed to coexist with the current Unturned, as a large portion of the community likes the PvP style of 3.x, while II/4 is trying to be an actual survival game. Pure updates usually are meant to replace the previous game entirely, while this is not the case for 3.x and 4.x.

Why would we call the 4th installment #2?

Antique, Classic, and Unturned 3 were all designed with the same objective in mind, heavily building off the last. That’s just “Unturned.”

We’ll have to wait and see.

Mm yes we will

Still need to talk to Nelson about it and go from there.

I have a plan to roll out for him.

Vote me for Steam Mod for Unturned II /s not /s

Reaver can handle it, with the help of his crew obviously ! Anyways, I guess that since the beta will be accessible through the “original” game an “Unturned II” sub forum might be made. So it would most likely be a preview for the the current moderators aswell to see it’s activity and if it requires more help.

The regulars hopefully? I would love to “moderate” the trolls…

If we troll the trolls, we would be trolls. Then we’d just be trolling ourselves by becoming the trolls we troll for trolling. You know what I mean?

Be careful of what you wish for. 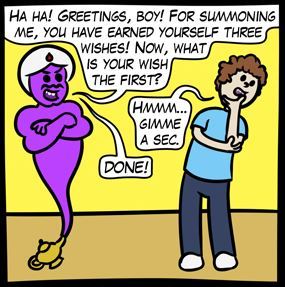 Generally speaking, a Literal Genie will make logical but basic interpretations of a wish. Nothing more and nothing less than what the wish explicitly states. This is so that when a wish backfires, we can laugh at the foolishness of whoever made …

who said I would troll them? I would promote them so fast! (obviously satire)