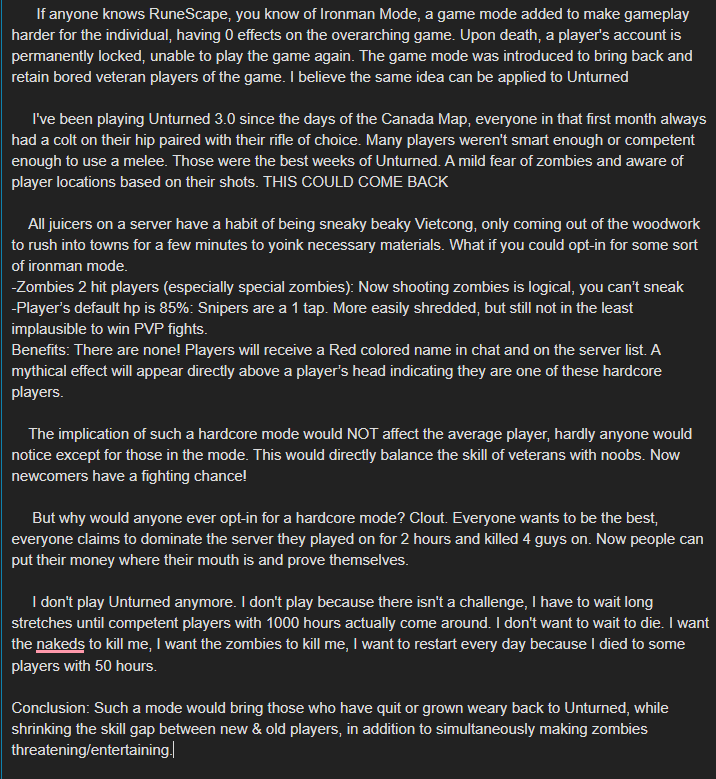 I think Unturned should have some form of hardcore mode, however before this thing would be added zombie navigation mesh component should be rewritten, to allow big, frequently map-sized nav meshes (like in 2.0 when we had zombies toddling all around the PEI map). As of now that game-leading design tool is very unoptimised and looks like It didn’t change since it was added in early 3.0 era using standart Unity (pre 5.x version) asset.

This is the most important reason why zombies are so weak in current game, and it more or less expain why players became the main threat in 3.x.

> As of PvP hardcore - I don't think this is interesting for veterans. You certainly don't accept that (not really 'new') gameplay vibe, being a fan of more hard PvE settings like in DayZ and Project Zomboid. That's why I wrote that entire suggestion and explained it. :nerd_face:

You tried indenting, which for any website using an automatic Markdown processor is typically going to convert into a preformatted text block. Similarly, > causes quote blocks. And ` causes code blocks.