So there was another post about making a story but it failed because people couldn’t decide what to write, so here is a functional one.

Rules
-You must continue the story from where the previous person left off, you cannot go back and change what happened. Once it is written it is permanent unless it is written off in a natural way.
-All comments must relate to the story, you can say something else after typing out your portion but it must be shorter than your part
-Try to use people from the community to make it more fun, it doesn’t have to be realistic

Okay so I will start with something simple to get the ball rolling.

Nelson is standing on the corner of a street late at night. Off in the fog a mysterious figure is walking towards him at a brisk pace.

Nelson doesn’t notice the mysterious figure because he has his airpods in and is browsing the forums on his phone. He is disappointed that people couldn’t understand that

Creation of the story

Okay, the idea is that we all work together to first create this idea of a world, then a story that fits that world.

The mysterious figure turns out to be Sven, who pulls down his bandanna and draws a crossbow on Nelson, demanding that he add Rocketmod to Unturned II and to ban P9nda from all current and upcoming servers, the wiki, the subreddit, as well as the forums.

Nelson draws out a Glock and fires three times into Sven’s chest before Sven can react and fire his crossbow. Nelson sprints away as Sven lies on the ground bleeding.

And since that’s like super illegal in Canada, now the police are after him.
(It is super legal in the USA though.)

Because its legal in the united states, Thats excatly were he goes.

Considering he’s from Calgary, Alberta, Nelson ends up in Montana.
(I know nothing about Montana though.)

Unfortunately for Nelson, it is -18° Celsius (-1° F) and he has little in the form of clothing for protection from the elements.

(beat you to it comm)
EDIT: 1 corrected spelling and did slight rewording.

However, he quickly receives a letter from a pigeon that he will be provided with a free apartment as well as all expenses and transportation paid, provided that he hand over the publishing rights of Unturned II for seventeen million dollars. Included is a contract with the specifics, including an office in California, the entire resources of the company, as well as a managerial position with retirement benefits.
In fine print, however, the letter also states that if he does not agree, then they will regretfully have to resort to force.

Nelson, knowing much of the fate of others that have received letters like this runs. Nelson manages to make his way to Kalispell. There he is able to get a hotel and stay the night. Exhausted from outrunning the Canadian Police and evading EA he promptly faints from exhaustion in his hotel room.

However, another letter arrives, this time via drone. This letter is similar to the first and is also asking for publishing rights, except that this time it is offering twenty million.

(These large black logos are so much easier to see when I don’t have the background blackened)
Nelson knows what to do. He calls both EA and Activision from the hotel phone. He tells them both to meet him at the same time at the same café, but he won’t stick around to watch the fireworks when the two clash.

The Titans agree, not knowing of the trickery that has just taken place.

However, when the Activision and EA employees walk into the cafe, they are surprised to see that a fistfight has already broken out. Another company had overheard the conversation and had decided to ambush Nelson to force him to use thier platform, but had been intercepted by the legendary distributer of PC games. Meanwhile, the largest internet conglomerate had also joined in, along with many other big names in the gaming industry.

By the time Nelson arrives, there is chaos and fighting everywhere. 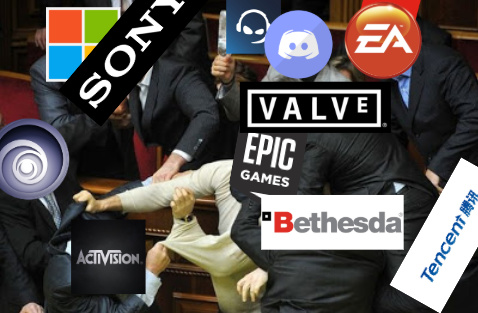 Seeing the Chaos in front of him, Nelson decides its a good idea to book it. Nelson sprints as hard as he can, witch is rather fast considering that he has Exercise and Cardio maxed. Nelson is able to make it Kalispell City Airport before the companies know anything is up, and approaches the Ticket Counter.

Once Nelson approaches the ticket counter he uses the last of his funds to fly to Mexico.

Unfortunately, the pilot has never flown a plane before, and Nelson finds himself half-way across the country from where he planned to go.
(Which doesn’t even matter because NeedlessMemeing didn’t even provide the city Nelson was going to)

Then the plane crashed, and Nelson meets the four heros of Zimbabwe