At the moment in Unturned 3.x the looting mechanics are decent and have a little bit of flaws in my point of view.
When there is loot on the ground you simply pick it up with a click of a button. You can spam to pick up a bulk of items faster. If there is a cluster of items in an area it is very hard to choose what you want. Simply the system can be improved with an overhaul. I think the system should remain how it is but be fixed for 4.x.

As a suggestion I think the looting mechanics for 4.x should head in the PUBG style. In PUBG you can loot with a click of a button similar to Unturned 3.x but you can also loot with a nearby pickup menu. This menu shows all of the items in a certain radius to pickup. It is then simply picking what you want.

Reasons why this system is beautiful 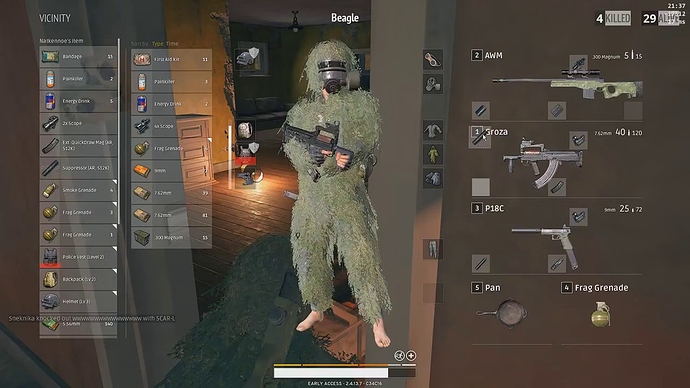 This is an image of the nearby pickup system in PUBG. It puts all of the items in the same category with each other. For example the grenades with itself, clothing beside each other, healing items beside each other. A system like this could also have a transparent background like PUBG so you could see your surroundings if you were to be in a PVP situation.

Leave your suggestions by replying!

I disagree with both.
Will make a post soon.

3.0 already has a nearby section into the inventory you lazy unscrolling nark

If a player or yourself were to die there is a bulk amount of items in one spot. Nobody wants to spam click and most of the time you find yourself picking up junk. With the nearby pickup you can simply drag stuff over to your inventory that you want.

First off, there isn’t going to be a lootsplosion. It is going to be a lootable corpse. and, this is very unrealistic and fits with games like pubg where the beginning of matches are fast-paced, but I don’t think it would fit in unturned 4, because there is no point.

There’s already a nearby pick up section, no?

There is but the current pickup system is just very unorganized. If there is a cluster of items its all just randomly displayed in a box. Also when picking up stuff from the nearby menu you can’t replace items.

Well, in PUBG dropped items are also very inconveniently listed in a long list, so in that regard 3.0 did it better. In PUBG even with only 10 items on the ground it’s a bit annoying to pick stuff up, while in 3.0, the nearby screen can fit dozens of items with ease.

Therefore I disagree with this suggestion.

3.0 already has a nearby section into the inventory you lazy unscrolling nark

Pains me to say this but I swear some forum posters don’t even play the game since they don’t pick up on these things.

looting should be that you have to look in cabinets and stuff and look inside fridges or crates.

I’ve also seen someone who didn’t know about dual rendering for scopes.

These kinds of things are a lot more common than most people expect.

Sadly, they are everywhere

There is but the current pickup system is just very unorganized. If there is a cluster of items its all just randomly displayed in a box. Also when picking up stuff from the nearby menu you can’t replace items.

Afaik it shows the items closest to you at the top, with the items farthest away at the bottom. It shouldn’t be random.

In version 4, and really in Unturned 3 too to be honest, there’s never a time you’d get lost in a swamp of items. Worst case scenario you come across someone with thief clothing and an Alicepack in 3.0 who has a full inventory of junk and it explodes everywhere.

In 4.0, the above isn’t much of a concern though, due to looting off the corpse’s inventory instead of the ground (potentially with the exception of the currently held item).

But yeah, you can’t just replace the items or organize the mess of items on the floor in the UI to your liking, but why would you need to do that? This is the open ground we’re on, not an actual item storage. “Replacing” items on the “nearby loot” UI isn’t that crucial in EFT, is it? Isn’t just dropping them on the ground good enough?

In 4.0 you will have to search through the bodies (I guess it’s gonna be similar to Escape From Tarkov, which is the best looting system for a survival game imo)