So I don’t really need help with something, I’m making a gravity laser and found the documentation and implementation for lasers doesn’t match.
Basically in the example for the Laser “Spread 0.8” is used. In the documentation “Firerate” is used. Neither is really explained properly, like is that 20% reduced or increased accuracy? How then, does Firerate work?
Also I had a nitpick about the documentation as it’s called “Item” now for both anyways and technically “Item” is no longer 4 and 13. It’s 12 and 13. 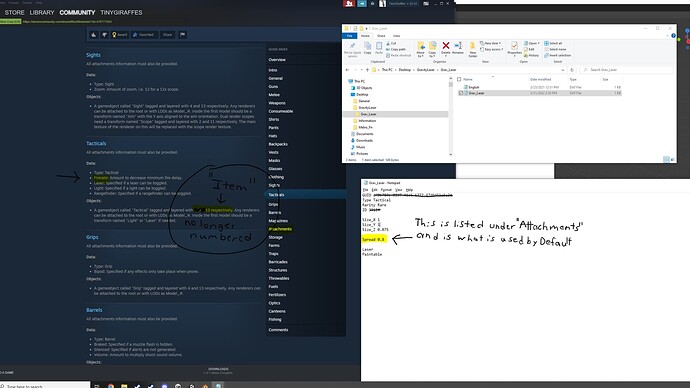 spread is a multiplier so your spread will be 0.8x of the original amount (20% better)

firerate increases your firerate by 1 unit (or however much u specify), honestly this game kinda calculates firerate very weird so idk how to explain it

If it’s a decimal, it’s usually a multiplier.

Ok, this was all part of a project that uses custom scripts, which I’ve just found out does not load in unturned. Soooo while I learn plugins, that would prob be the most bang for the buck thing for nelson to add lol.