Rather than having adjustable scopes, one item that can be found in real life is called a magnifier. This can only be used with red dots, aimpoints, and halo sights, so it won’t be a separate item, rather, it would be a combination of the Kobra, Halo, or Dot sight, as well as a new item, called a magnifier. It could also possibly be a crafting recipe of something similar to (Kobra Sight + Magnifier). If you don’t know what a magnifier is, this is one.. If you need to see it in action in a first person perspective, here is a video. A magnifier with a Halo sight looks like this. In-game, it would probably only have 2-4x for civilian and 4x-6x for military/ranger. It’d basically be the upgraded version of the current mid-range scopes, with the added benefit of having a easy to switch close range optic. Of course, canted iron sights could also be added, but those would be able to be used with every optic.

I know, but this is just a visual representation I realized I still had from a year ago.

then you could’ve just posted the album?

Eh. I think it’s cool regardless to give feedback on the possible things already noted on Trello just to build the concept up a bit and flesh it out. As long as the person already understands it is noted as a thing, that even though it is noted it might not be added, and that they cannot force anything.

But, yeah. It’s just cool sometimes anyways. As long as there isn’t a ton of fluff, and it’s readable.

Very cool - definitely want this in, being able to align multiple sights on the gun’s rail and adjust things on them (variable zoom, magnifier on/off, canted iron sights)

To bounce off OP’s suggestion, maybe a system like Escape From Tarkov is somewhat designing, where every inch of rail space can be utilized. A good system in my mind would be at least a 5-6 layer system to support an entire ‘ecosystem’ of sights. Zoom, Mounted RDS, Irons, Canted Rrons, Magnifiers, Canted RDS, and Canted Sights, as well as Dual-Scopes (Leupold D-Evo), all to be used at once (Granted they’re not in eachothers way and all have rail space), by assigning each optic to a hotkey and rail slot (Designated by 2/3/4 optic slots per gun depending on rail space). One 45 degree canted on each side of the firearm, a magnifier that goes in front of the primary optic, Irons fold down or may obstruct the scope a small bit, and the primary optic you’re going to use (1 rail space for a smaller scope, multiple for larger ones) are placed more towards the middle of the gun. Mounted RDSs would be positioned above your scope and could be used by assigning a hotkey to it (Numbar or Numpad), or By Ctrl right clicking, similar to Arma mechanics.

Sorry if hard to understand and sorry for wall of text. Just needed to get the idea written down before I forget. Might do a shitty mspaint to explain.

EFT has a really nice system that I like, but I feel like it’s a bit overkill for Unturned. I’d keep the total amount of attachment hooks possible overall to about 4-7, personally. I do like that the Escape From Tarkov UI feels more… not exactly “intuitive,” but nicer overall. The arrows are nice, the color coding is decent, and you can cleanly see what everything is. No overlap, and names are shown.

I’d keep the total amount of attachment hooks possible overall to about 4-7, personally.

Fieldstripping and Disassembling could be fun, as long as there’s gun parts that might change stats that spawn at gunstores or Military/Ranger bases that don’t spawn on a gun. You could also interchange gun parts (Stock, Reciever, Foregrip, Barrel, and Grip) between weapon families.

Sources for these ideas: https://vignette.wikia.nocookie.net/unturned-bunker/images/3/32/Custom_weps_sss2.png/revision/latest?cb=20161113062835 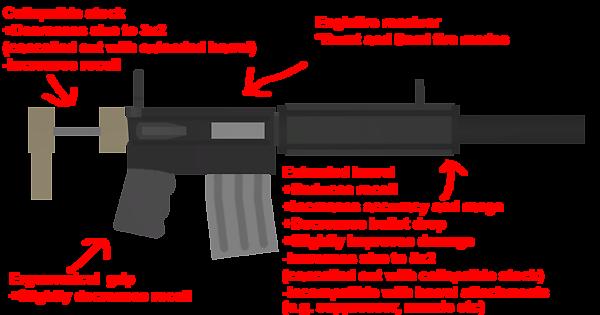 HOLY WE WENT OFF TOPIC

It’d be pretty overkill, but it’d be cool to see depending on how more complicated 4.0 will be.

Maybe we could even craft some of our own gun parts. Make a barrel out of scrap or a stock out of sticks. Slap it all together on a Zubeknakov with Maplestrike pieces. Taking mix & matching to another level.

Can always hit the “+ New Topic” button that pops up when clicking timestamps if y’all want to branch off into general attachment system changes (for #unturned-4?). Source back to similar posts like Magnifier / Semi Sear / etc.

Or, @Krodeon could change the title to be more general, since I don’t see too many people having much to say on the magnifier mechanic stuff specifically.

I’m personally not big on full-on taking stocks and stuff to fully make/customize your own gun, at least, not yet. Might just be the concept art people make not being too aesthetically pleasing to my eyes, but consistency is nice for solo gameplay and multiplayer battle-royale type shenanigans

Since it was mentioned though: