So, once upon a time, I was walking down main street, and saw a motorized bicycle. (not motorcycles, bikes with a motor attached to make a makeshift motorcycle.)

Tl;dr
This post is about making it so you have to use low end vehicles for makeshift ones.

Wouldn’t that be more of a dirt bike than a motorcycle?

Maybe also makeshift gliders, skateboards or such random yet logical stuff. Actually much better ideas than a giant flat plank with wheels, seats and an invisible engine lmao.

About your “glider”, an ultralight plane is actually fairly easy to assemble for people who are into DIY. They’re also super light, as the name implies, can turn on a dime, and are incredibly fuel efficient due to how light they are. Definitely fitting for UII.

As for attaching a makeshift, super basic gas motor to a boat or bicycle, it’s done very frequently in developing and undeveloped countries. I’d imagine it being totally reasonable, but obviously they would be neither powerful nor efficient compared to a proper motor. (They’d also be fairly loud.)

In addition to the motor other minor components should be required too. For the boat, you’d also need to carve a propeller from wood or craft one with some metal, and for the bike maybe some drive belts fashioned out of rubber or leather.

A Handcar could be a reasonable makeshift stamina-powered rail vehicle. 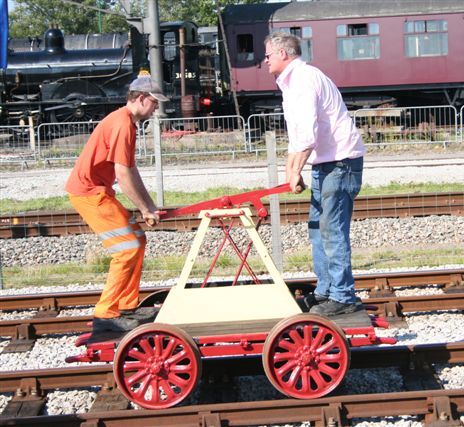 Aren’t those things gonna run over them?

Yes, if you leave them out in the middle of a track. Maybe you could store them on alternative tracks in trainstations and the like.

Was talking about when there are peoples, using that thingy, and then a train comes.

How can we talk about vehicles if we haven’t discussed the locking mechanic yet?
(Unless I live under a rock and don’t know)

Last I heard, (which was quite a while ago) Nelson would like cars to have doors that open and shut, unlike in 3.X, and is planning for locks to be things that are placed on doors, crates, etc. rather than some materials not being lockable, others always being locked and only having their locks changed by being picked up placed again. (though I’m neither 100% sure that either of these are still the plan or that car doors were ever planned to be handled the same way as house doors.)
There have been a few threads about locking things you could find by using the search bar, but the only recent one was about trigger locks.

Well, I wouldn’t be surprised if Nelson makes an entire animation of your character entering the car and starting the car
OR (which would be way cooler)
Having a button to actually start the engine instead of just automatically starting the engine when you enter. If the batteries need fixing, the car wouldn’t start and give the infamous “shit! Car’s not working” sound. Because I don’t want the game to just tell you that it’s out of gas/batteries. I want the player to find that out.

I’d rather see more of a mad max type of makeshift vehicle in terms of Unturned 2, currently I feel as if the new game will not be as ‘arcady’ as it currently is. So I would rather see you be able to tear down the structure of a car to the bare minimum and then experiment with your design.