Hello, I am Hound and yes I really do love the Darksouls franchise.

Poise and Stagger Health made its debut at the very start of Unturned 3.x, zombies were now staggered when hit with an object or with bare fists (When overkill was at level 5 and up).


To my knowledge this hasn’t recieved any attention or improvements ever since it was first implemented, but what we have here is something that can really help spice up combatting the new enemy in Unturned II (The Turned) and make them more challenging.

This same system can also be applied to the players in the game as well, almost a universal system for staggering.

For those inquisitive souls who want a specific definition as to what "Staggering" means, staggering is a result of being hit by a melee attack and recieving a short one second stun.


The system implemented into 3.x was a start, but never expanded upon. It is very crude and doesn’t amount to anything other than making the enemies in 3.x a total cakewalk to kill.
(Unless you are playing on Hard, but lets be real… not a lot of people played on Hard.)

Poise Health is a factor in which an enemy or player that takes consecutive hits to the head will recieve a one second stun when hit enough times and with enough strength.

Hits anywhere else on the body will not damage Poise Health.

Players, Walkers, Crawlers and enemies of similar fashion will share this Poise System.
Unturned II’s iteration of the Toughness skill will also be a factor in the Poise System.

Unique enemies such as the sprinters and Mega Zombies (Mega Turned?) will not share the system and deviate however seems appropriate.
(Sprinters will likely stagger at any weapon.
Mega Turned will simply be unstaggerable.) 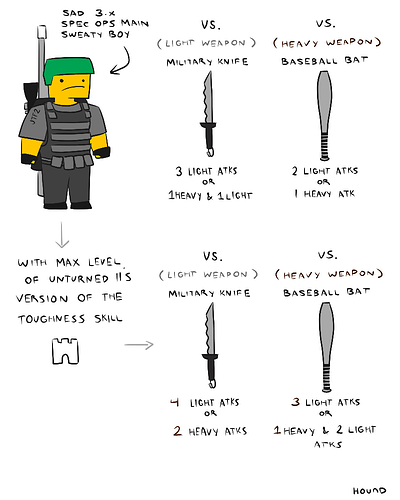 Here is a fun graph I put together to make the information easier to digest.

Power Attacks
Power attacks, in regards of the Poise System will be treated as 2 Light attacks to keep things simple.

Light Weapons
Light weapons are simply weapons that are light. Don’t bare much impact.
Light weapons take 3 strikes to the head to stagger enemies.
With max level toughness, it will take 4 strikes.

Heavy Weapons
Heavy weapons are weapons that are heavy. Have a lot of force behind it.
Heavy weapons take 2 strikes to the head to stagger enemies.
With max level toughness, it will take 3 strikes.

Unique Factors / Situations
There isn’t that many, but there are some instances that will bypass the system.

Grenades will always stagger.
And so will missiles, as you could imagine. (If you somehow survive)

Recovery Factor
Upon taking a few hits, but not enough to stagger. Your poise health will reset after being out of combat for two minutes.

Thank you for reading everyone.

Mega-zombies (mega-turned) should be staggerable, but ofc those would have really high amounts of stagger healt, meaning you’ll have to use medium to heavy weapons and hit quite frequently to make this giant stagger.

P.D.: I’d classify a baseball bat as a medium weapon.

I like your idea, but we should wait until the player skill system is explaining by Nelson before expanding on it.

I haven’t read it all but the picture is good.

I’d say that a weapon being blunt should be able to stun quite easily compared to a sharp weapon. On top of considering the weapon size, being blunt/sharp should mainly be the determining factor for poise health.

This would give the famously underpowered blunt weaponry category a good advantage over sharp weaponry.

Blunt weapons should also do trauma damage through armor.

Hrm… Maybe the giant can be staggered via stalker shot, and rocket launchers + other weapons on extreme scale?

(Normal snipers can too, but take 2+ in row to do so, also sledgehammer heavy hits works too)

why did my knee start hurting after you said that?

Are you a giant, and someone (little) just sledgehammered you in the knee?

¿En serio? No me había dado cuenta :b

Jokes aside, are you really in favour of seeing shadowstalker in UII?

really it’s just a crappy sniper as of now

Go ahead and puke, I hold my opinion firmly.