Out of Ammo! Realistic Reloading

You know what would be amazing in Unturned 4.x? Realistic reloading.

In my opinion, the 3.x ammo box system encourages Player-V-Player combat too much. With a click of a button, all of your magazines are full. Here are my thoughts on how refilling magazines should work.

Because Unturned 4.x is more survival oriented (Hooray!), reloading magazines should take some time. By having a repeated animation of a player putting bullets in a magazine players won’t be able to carry on long engagements without taking a break to refill. This also encourages the long preparation for a large attack if a PvP server is made. Skills could also up the time it takes to load and individual bullet, like the reloading skill from 3.x.

Maybe we could take it a step further with the spawns of different caliber bullets (Stacks of 12ish I’m not insane). That way you could easily store them in a box, but you do actually have to find firearm stores and use their bullets. These could have a 75% spawn in a firing range booth, or on a shelf.

Tell me your comments on how far we should go with the realism of firearms.
plz read Nelson k bye.

Bullets calibers and basically everything you’ve suggested has been discussed before and is already confirmed. There’s people who doesn’t agree with the time to refill magazines, but I think it should be like that, so there’s no reload absurd exploits.

Exactly! You shouldn’t be able to hide behind a tree and have full magazines.

I’m okay with such a system so long as it doesn’t suck the fun out the game by being an unfun, monotonous process that the player has to do all the time when loading guns. Realism for the sake of realism is bad, especially if it takes fun out of the game.

Magazines and ammo crates use the same interface for organizing ammunition stored within them, and that interface also determines the order bullets are fired if it is a magazine. (Interface shown in Devlog #005). 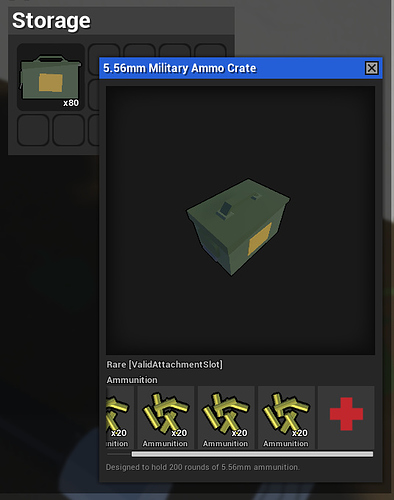 Calibers are already a thing, and important in Unturned II.

EDIT: to clarify, this means reloading is naturally slower just because of the UI differences

Could be rather inconvenient. Speedloaders would have to be available and the player should be able to refill feed devices without exiting the inventory/crafting interface to do some first person animation.

What if we are talking about a 2-3 second animation for each magazine? Firearms aren’t the main focus of Unturned 4.x even though they are gorgeous.

But on the other hand, it is an option for even more realism. If reloading already takes a bit then sure. But I still think that when you refill, there should be a 1 second bar of refilling or so.

Yeah because an animation for reloading a Beta C-Mag would be enjoyable for each of the 100 bullets you’d have to insert.

Or we could just drag bullets into the magazines and call it a day.

Aww, your ego boostedness is gone

(Back to topic) I like the idea of “manually” reloading your magazines, as this will make a player prepare themselves more.

Also @NeedlessMemeing 100 bullet drums use belts? How could a spring work in a drum? Load the belt, and you have a 2 second animation.

I never implied they used belts?

Easy solution. Just add a crafting timer. No one wants to sit through an animation of reloading a magazine.

I’ll rather do reload animation.

Even that, I’m not fully happy.

Make the reload animation an low-priority “idle action” that occurs if the player isn’t doing anything, is in the inventory, and has recently dragged ammunition into a magazine’s nested inventory menu.

Cancelled by most actions, due to being low-priority in the list. Only aesthetic value, while the actual “refill timer” is just how fast a player can:

Which is slower compared to Unturned 3’s:

Rainbow six recently did something similar where as you reload a gun, there’s certain ‘checkpoints’ along the way so if you need to run away halfway or three quarters into the animation, it’ll resume at the last ‘checkpoint’ when you stop or hit reload again.

This is a different system than what I’m (or OP) suggesting, and has been suggested in various “tactical reloading” threads.

OP wants players to have to put each individual bullet into a magazine via an animation. The post isn’t about putting the magazine into a gun.

I’m suggesting that the animation OP wants should just be aesthetic, and is something that occurs when “idle” in the inventory, after moving bullets into a magazine’s nested storage via drag-and-drop.

Yeah, there’s a checkpoint after each vital step. Removing the mag, placing another, cocking the gun.
I also love how ADS’ing stops your reload. Unlike 3.x where you are forced to reload your gun all the way or not at all