As I released my video about Devlog #004, I found that people really don’t like it. You can look in my comment section to see what people are saying. But basically, no one likes the inventory. Some people don’t like the animations. Others say this game is getting way too realistic with things like grass. Personally, I like it but Nelson, if you’re reading this, you should look at my video so you can see what the people don’t like about it and MAYBE change it. It’s up to you.

honestly, i find a number of these complaints pointless. i can understand the one about the animations - the strafing is REALLY uncanny, especially while standing - but the others just don’t make sense.

realistic grass? it looks the same as 3.0’s, there’s just more of it and it’s darker. bad inventory? it’s just 3.0’s but with clothing slots instead of weapon slots, and a few extra inspection/looting features that people have been asking for. realistic graphics? the only thing that’s mildly realistic is the lighting, and even then that’s an unreal thing at the moment.

Most of the feedback isn’t constructive as what Whistleblower has stated.

This just seems to be a subliminal advertising attempt.

That is what I’m thinking. I love the new changes and am looking forward to new gameplay and graphics. Like you said, the inventory has more features and functions in 4.0 compared to 3.0. People just don’t like the gray appearance I guess.

Criticism is different from hate.

On a side note: a lot of people in your comments also seem confused as to what 4.x actually is. I think better clarification of this would help your own videos be more beneficial to the viewer, yourself, and as a source of feedback. Correct anything blatantly incorrect people assume/preach in the comments, and ensure that your viewers understand what 4.x is and individual notes/context that should be given with the rest of the devlog.

I wouldn’t even take these ‘Complaints’ into consideration, no thoughts were into creating those comments and they don’t even realize or understand behind the devlog. They’re all just biased/personal preferences. Only thing understandable is some of the animations 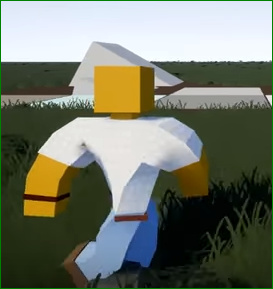 When you’re trying to be tough but the guy pulls out a gun.

The crouching looks fine though.