remove plates from the game they look ugly and u can just build and get on top of any base and roof raid it, making claim flags useless

ok but if we dont have plates where will we put our food?

Your hands are blocky? mine are triangles :[

But you can free build with them

You can make a shit shack with them

As much as I want to meme this. Honestly the free-form buidable update was probably the most influential update on unturneds core mechanics.
I honestly agree and believe that free-form plates, as they are, ruined ground bases and compounds in general and subsequently all base designs at the time. This also made raiding skybases around 4x easier (it only takes 3 logs to build 1 story high Vs the 12 or so with floors and stairs). It is also horrible visually, as people build giant towers of wooden plates to skylimit.and destroying these plates take way too long and they have way too much health for what a single log should have.
But in summary he is right. Putting a claim flag after free-form plate update did basically nothing, because they can literally build a log stack to above your base.
But if you choose to not have a claim flag. They can spend 2, yes 2, scrap and grief your entrance with metal plates. And these can only be raided with raiding material. And when they stack 5-10 of these, on vanilla servers it’s basically impossible to raid yourself out of your base.
This is just (IMHO) one of those updates that had good intentions but changed the game I’m a bad way.
I believe this could be fixed by making small metal plates raidable with normal guns (I.e. they act like wooden plates do now) and wooden plates should have reduced health. Also, plates shouldn’t be allowed to stack on top of each other. Like wooden floors, they should only be able to be placed off the ground (and should have an additional placement on on map objects)
But I again feel like this is a lost cause. Similar to gun balance. I don’t believe unturned will have any big, dynamic changing updates like this in the future and believe everyone is just hoping unturned 2 has an Improved feel overall. My 2 cents

Edit: can we also talk about how metal plates are literally 0 pixels thick and that makes them look so bad and clunky. It would look so much better if the wooden plate model was changed to colors of metal (like wooden roofs and metal roofs) and this was their model.

what do you mean “roof raid”? I thought claim flags affected all of the area upwards as well.

Couldn’t claimflags just be made to do that instead? I like plates to put over car windows, and to use to barricade small windows and crevices.

Claim flags protect area in spherical radius. Making them protect up to the sky limit seems easily abusable and won’t aid the issue anyway as one of the more popular uses of plates in raiding is just making long tall ramp going from hood of the car and then driving up to the claimed area and climbing wherever you want.

Ngl, a cube would be better

Because almost all bases are square-ish. You lose so much space with it being a sphere because there’s no corners. 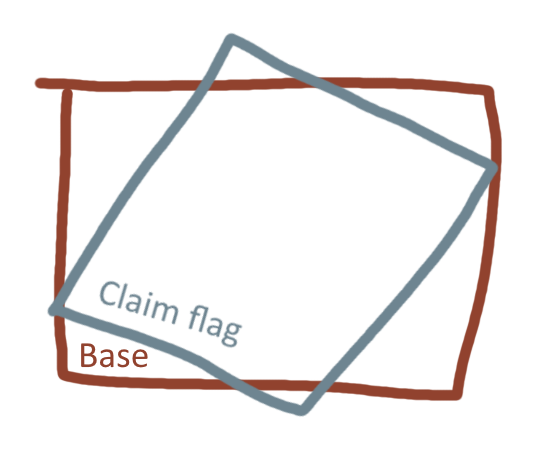 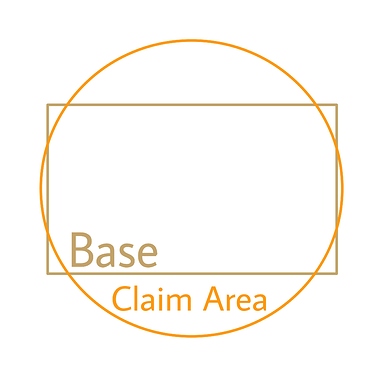 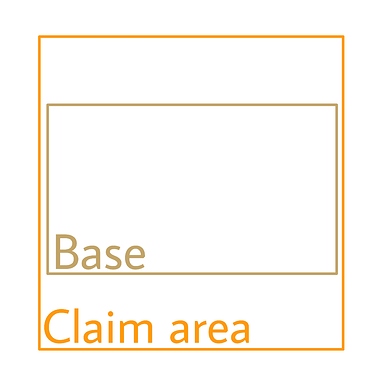 That square is twice as long as the circle. If you just make the circle larger, it’d fit too. Normally a square should be smaller than a circle, if they have equal side length.

Either way, for complex shapes you’ll need multiple claim flags. But as far as “size” goes, it’s a weird argument since it can just be made smaller/larger (regardless of which is inherently bigger).

EDIT: The above is discussing radius/side length, not total area. If they had the same total area, you’d likely still want a circular shape because it’s consistent regardless of where it’s placed, and the orientation of its placement. A cylinder would be more consistent vertically than a sphere, but at some point multiple claim flags are going to (should?) be necessary.

but at some point multiple claim flags are going to (should?) be necessary.

Also, the sizes were totally off because I just suck at making sketches.