You don’t need to worry about your base just being gone the next day, if you die, it’s on you, not xXAssassin _inurmomXx’s group of 9 stalking military bases like a bunch of braindead vultures. Plus, the ragdolls in singleplayer are like 10x funnier with a 0 Kelvin kit.

Really, i just use it to chill out if i don’t feel like fighting people, and it’s easier to keep focus on it instead of minecraft (I have a habit of wandering) with its more focused goals of “get loot, make base, get better loot” even if i don’t use a lot of it, the loot’s cool to hang on plaques and display, plus collecting vehicles is just fun as hell to me.

Edit, france is the best for this, with a ton of guns to collect, bug free quests, and the coolest vehicles in the game exclusive to this map (mainly the maelstrom) but that’s just my opinion.

SP is pretty fun, most of my hours are in SP.

I lost my Russia SP base in a big dumb, and I’d love to do another playthrough and start a super base up again.

I dedicated all my hours on decorating the pirate cave in singleplayer.

I hope the new game offers a nice singleplayer experience, or at least some enjoyable game modes or features to play around with.

Just in Unturned or in other games too ? iirc you’ve played TF2 quite a lot.

I am disillusioned with the attitude of some unconventional players and arrogant server admin, so I often play single. or play with my friends.

Certain multiplayer games (Mostly skill-based ones and/or with a competitive scene). I don’t mind TF2 but in many other games my chest feels heavy when I play too much.

Singleplayer is underappreciated but also lacks a lot of potential gameplay of multiplayer. For casual playthroughs where I just want to chill but still have a challenge, PvE is a good balance as you still get wholesome multiplayer interactions.

@MoltonMontro introduced me to a Russia PvE server recently with scarce ammo spawns and frequent boss zombie spawns, as well as a few basic plugins. It’s actually really fun and I’ve been enjoying it for a while now!

Molton, if you’re reading this, I finally killed a Groundpounder with a Nailgun and melee weapons

pve is my absolute favorite, is this server still up? 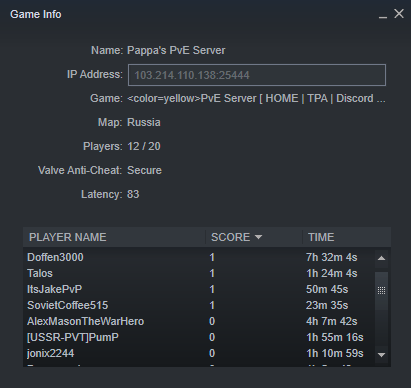 The only plugins are /home and /tpa, have fun.

My base is at the 3 way intersection north of Moscow.

i used to grief bases on pve servers
See you soon

Edit: damn there are mods? i’ve been fooled, effectively bamboozled.

Most of the mods don’t really interfere with gameplay though, barring the arsenal and more farming