Skill systems for U4? suggestions and discussion

This won’t be an too long of an suggestion but more give something to disucss about and think about.

There are many different kinds of skill systems for games, but ofcourse they all don’t fit all kinds of games.

Lately I’ve been thinking about skillsystems to U4 and what kinds of systems would fit the game, I know this topic has been discussed some time before, but what I recall it’s a long time ago.

WHAT KIND OF SKILL SYSTEM SHOULD U4 HAVE?

There could be a skillsystem that is actually two separate skill sytems smashed together.

Two different times for each skill system, first is when you create your character and choose some traits, hobbies, work etc. The second would be then in game, some kind of skill tree or something that opens up new opportunities the more you get skilled in something.

During the character creation in game or outside however it is made, there could be the option to choose some perks, traits, work, hobbies and such, you have an Limited amount of points to use.

You could personalise the character to fit your playstyle and your interests, and also be a little skilled in something you did before the outbreak, and not just give you the sad thing thats now that you were a lazy sack of potatoes that didn’t even exsist before the outbreak, exquse me.
This would give the game some more diversity and give the player a chance to in the beginning have some skills in some stuff.

It would also make it easier to join an older server that has been running for an longer time.

So simply it’s like the system from Project Zomboid. 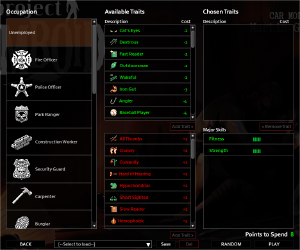 this I havent tought about as much, but what I have come up with that could fit the game is that the skill system shouldnt be that you use points to level up, it should be a system that gives you exp for doing things that would get you better in that.

for example to level up

These systems would ofcourse need balancing, everything does and it also depends on the game, what gets implemented in the game and what hte game offers.
But in general this would fit the game, assuming it’s an survival game

I really do agree with some of these things and I talked about similar things with @skoeldis the other day. Some things probably need evolving but you got the spirit.

I think craftables and such when learned should pertain through death. I hate dying and losing the ability to make lockers and metal walls. Once learned from a blueprint or from a book you would have the skill to craft that item until the next server wipe. Actually now that I think of it rare item schematics could be a rare drop that could be learned. Then that player could trade his skill to other groups or players. (I am thinking like gun turrets and rare craft able guns/machinery)

Also I think that shooting should not be a skill you have to level, I think that should be up to the actual players skill level with controlling recoil and attachments. I hate the additional recoil just because you haven’t leveled up your shooting skill.

Also I want to add I don’t like the super human abilities players get from full skills. I mean like vertical jumping over fences, jumping and sprinting in mid air. Trying to hit one of those spazes with a single shot rifle is impossible. I noticed in the beta that you can’t sprint backwards and forwards and sprint in mid air, which I like. I think this will really change up pvp into being more tactical and fun. Instead of dudes hoping around on crack.

Well it is a shame to lose them but at the same time that would depend on the game itself, U4 is an survival game, the goal is to survive, so it would take alot away from the game, if you didn’t really lose stuff when you died. its a feature and part of the survival games.

Also becoming more skilled by doing something more is also a thing that is understandable, I think stuff could be balanced out, and I hope they do.

U3 has very different physics and controls than U4 will have, also that is the controls in the BETA its not done, it needs fine tuning and balancing and stuff, but personally I am very impressed by the improvement from 3.0 to 4.0 you can already see an amazing difference.

I agree that there shouldn’t be sprinting in air and stuff like that it’s quite annoying, things should be balanced out.

Ya I guess it adds to death penalties, makes sense. But it sucks when someone door camps you and now your crippled lol.

If the death penalty does come back to U4, the bookcase should make a return as well to store xp. That’s what I do in 3.0.

It would be to easy if you only lost items on death I guess. And not any skill.

yes its a shame, we’ll see what kinds of play styles will come in 4.0

There could be an bookcase xp storage depending on how the skill system works and I’m not against that, it helps and makes the game easier, but instead of just storing xp the bookcase could store recipes, blueprints and books that help you skill up your already gathered skills after a death?

Ya having skills/recipes in books and blueprints stored in workbenches would be sick.

That would be great. Imagine fighting for a valuable blueprint.

This is not cool to fight for God damn skill blueprint ,to fight for some sort of a weapon blueprint seems to be much more interesting.

I think he is referring to our discussion of having

skills/recipes in books and blueprints stored in workbenches

You wouldn’t have to fight over them to obtain them, but if an enemy group had them in there base you could fight over them. I think he was just making up a cool pvp scenario.

I am thinking the way to obtain blueprints and recipes could be through looting or maybe in excursions. I think that would be cool. Or maybe learn them some how by studying the item.

I feel like a mixed system between traditional skill trees and simply leveling skills could work better. For example, you could gain skill points from physical activities, but only be able to spec those points into skills such as stamina and sprinting speed or being able to vault over higher obstacles faster.

Another example would be weapons-related skills. Using a particular weapon, or family of similar weapons, could give small bonuses to the player’s reload speed, disassembly, or proficiency with attaching and removing attachments. Meanwhile, the actual points earned from doing so could be invested into a passive skill like being able to aim down the sights of one of your akimbo handguns.

When it come to skills, my main concern is that player skills aren’t handicapped by in-game skills.

Driving is the same, in gta your driving is handicapped until you max out the driving skill, like, why?

A legendary blueprint that you made, in secret from the World, found by some scavengers, sold to the wealthy in the black market.

scavenging and searching, buying from traders and such, would be an quite intteresting way to obtain books and other files.

You could maybe also make your own from what you have learned?

@RedComm
well yes depending on how you mean, ofc there could be skill points you get in the game and use in some kind of perk skill tree or something but at the same time if you think about it, yes it works, but does it fit in to the game?

@PrimeHuntsman
Yes I agree that is an very annoying feature in games, U have any ideas how to avoid those kinds of problems?

personally I think that when you make your character, depending on hobbies, work and traits you might have an advantage or have it easier to do some stuff than other people, while you have a disadvantage to do other stuff or are just basically neutral in some stuff.

for example PZ skill system has a perk kalled hothead which gives you the ability to drive vehicles faster, ofcourse if you want to be an driver you should choose this perk, but if you absolutley hate driving, you might consider choosing sunday driver that makes you drive slover, but gives yiu a few points to use on something else, like an endurance perk or a gun perk that helps you in those categories.

Its an very interesting but quite complicated subject.

Of course it fits into the game. Why wouldn’t it? No need to reinvent the wheel here.

I didn’t quite understand what you ment so if you’d like I would gladly hear your ideas and suggestions too and your opinion about things.

I meant exactly what I meant. I want to see a system in which skills can both be upgraded passively through doing certain tasks in addition to skills that can you could spec into.