Unturned is a game with an audience primarily comprising of kids.
Which is why I was disgusted when I found a fairly active RP server had… this: 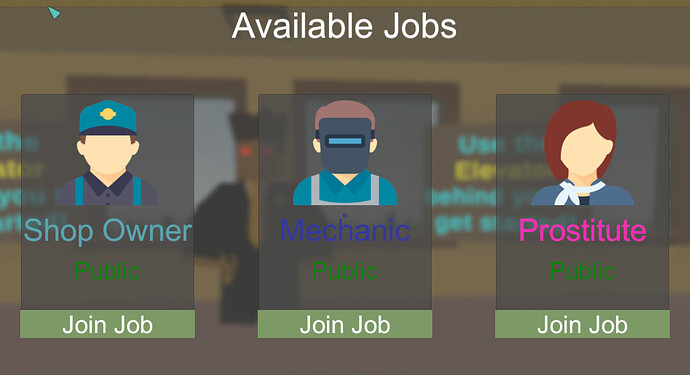 I agree. No server should be encouraging young kids to go out and be a mechanic. Next thing you’ll know they’re gonna be hopping on every Snap-On truck in town, buying overpriced tools and trying their luck at raffles for a free cooler or some shit. Truly, what has the world come to

Yo what the hell ahhahahaha

the fact “Prostitute” is classified as a Public job means that in that server, they work in state institutions paid for using taxes… Which makes no sense for the “Shop Owner” as Shop Owner implies a private business unless this is a communist server. such miss information guided toward kids.

classified as a Public job

I assume that it is public/private as in who can join, not what kind of job it is. I’m not opposed to that interpretation though.

Waaaa people can’t play the way they want, they have to play the way I want.
They kill people on the regular, I am sure they know what sex is and what a prostitute does
Do I think thats a good idea? No, I don’t. Do I think you, me or anyone but their parents should police the way they play? Also no

Can someone tell me what server that is, I wanna check it out so bad

OHHHHHHHHH WTF and what is this server @FinnaBustABuster

Seriously though, I don’t think we should police but jesus this is a kids game with a majority underage audience this seems a little sus for server owners to be doing.

So they quite literally are encouraging kids to be interested in prostitution. This is extremely messed up.

I like how intentionally ignorant you’re being, like you know it’s wrong kids are encouraged to take on an illegal (in most places) and sexually driven job, yet you don’t want to acknowledge it.

Its called a joke my guy. Knowing Armaros chances are he is also not a fan of that shit but hey, at least he doesn’t want to police the way people play the game (or what they post, both of which apply to OP).

So the whole kids killing each other is cool but a prostitute is where the line is drawn???

ed a joke my guy. Knowing Armaros chances are he is also not a fan of that shit but hey, at least he doesn’t want to police the way people play the game (or what they post, both of which apply to OP).

jokes aside: killing each other is programmed in the game, I’m wondering how boring “prostitute” is as a role in that server.