Intro
I love lore, I can’t have enough of a great story being told during a game. But what I don’t like is major plot holes or things like that.
Unturneds 3 story is a lot of fun to unravel and I really enjoy it when I find the notes hidden around a map. But there is one large plot hole I can’t get around for legit nearly every zombie game and movie, how did it spreed so far?
What is wrong
In most zombie games the virtual infection that makes people eat each other is spreed through bites. But honestly even if you were unaware of the zombie you probably wouldn’t lose in a fight or flight situation with a zombie. Not to mention the starting amount of zombies would be quite low and if the army just shot them all they would win.

So how do we create a good and logical zombie game story, we look at the logical examples. I am legend and world war z are what I’m going to use for the basic ideas and examples.

My ideas and main bit read this at least please
In my opinion the virus should at first spreed like in plague inc hidden for a while, the many people star getting coughs and green ish rashes, aswell as some other bad symptoms like vomiting and fever. The virus makes people sick through contact sometimes, but also water and coughing in the air, eventually it can kill you. This spreads the virus like in I am legend, but not everyone dies form it.
Then stage two hits, the dead rise, and they arnt slow zombies but fast like in world war z, they show up somewhat quickly, so the army has time to set up camps and things but these are overrun soon.

Now this would create epic lore and other things, but after time the zombies would slow down. Then that is were your game begins.

A lot of you will see this and unnecessary but I like story’s in games and this has so much potential.

Well, we can’t just say thay they were fast but for an unknown reason they became slower. Which is why I think we need to make the xombies faster in Unturned II to make them harder to deal with

True, but what I think is the “fresh” zombies will be faster and as they get older they get slower and weaker. That makes sense as the fresh zombies would have stormed they camps and then as time went on they got older,

can they have children?
lol

I mean Nelson said things about the spawners and hives so who knows.

aren’t they supposed to be from a different dimension or something, or like some different place? idk, i think i remember from a devlog or trello or something

There’s multiple issues with your proposed story and lore, and I’m not going to go over them; but, frankly, UII does not need, and should not have, a “zombie outbreak” story. The extra-dimensional invaders that the Trello and Devblogs have hinted at is a far more interesting and compelling story, as the general concept of it has not already been beaten to death; the amount of “virus” stories out there are so innumerable as to make them commonplace, boring, and altogether uninteresting. Meanwhile, however, the new angle hinted at with UII allows Nelson several things, chiefly being:

A: More freedom with what he can do with the zombies. If they’re an extra-dimensional construct instead of something from this world, who says they can’t do some wild stuff? If Nelson is allowed this creative freedom, we could potentially see some very interesting variations in-game.

B: More freedom with the background story and lore. He doesn’t need to write several 10-page long essays to explain the biology, form, and function of the virus; it’s simply an extra-dimensional construct that infests/reproduces within/hates humans.

C: More freedom with the end-game level of technology. If there is cross-dimensional travel, who could say what those that enabled this travel would be equipped with?

D: More player freedom with their own personal backstories. It sounds stupid, I know, but some people do genuinely enjoy the role-playing aspect of these games; and I don’t mean in the sense of “roleplay” as featured in “RP” servers. I mean “roleplay” as it is demonstrated in single-player RPG’s; simply choosing to adhere to a set of morals, or acting in a situation as your “character” would. If you’re forced to adhere to a single, pre-determined backstory, it really hampers the creative freedom of the player.

In the end, it all just boils down to more creative freedom. Nelson shouldn’t be forced to adhere to standard zombie-apocalypse tropes, and he should have freedom to create the story as he likes. With games like this, the story is less of an essential and important aspect of the game’s background, and more of a set-up for the circumstances of the game. After all; if there really was a realistic and in-depth story about the background of the outbreak, wouldn’t the entirety of that buildup just go to waste as soon as you spawn in, naked, on a beach; thereby making it painfully obvious that you’re in a game? It’s As John D. Carmack, one of the main developers of Doom, once said: “Story in a game is like a story in a porn movie. It’s expected to be there, but it’s not that important.” The same principle should be applied here; UII doesn’t need a in-depth and heavily-explained story, because, at best, it restricts creative freedom and makes the overall game experience less interesting. The way U3 did things was fine; there’s enough background to not leave players confused, but not so much as to restrict the creative freedom of the game.

TL;DR: Having a pre-established story in games like this heavily restricts creative and player freedom; there’s a reason very few of them do it.

who said they are “non regenerating”?

I hope that the Turned will be more akin to Xen creatures from Half Life than to ordinary humanoid zombies. I mean, there should be humanoid variants, but I think that more outlandish looking creatures could make it far more interesting. Also, stuff like hives or nests, something like the Spider Nests from Metro Last Light, which should spit out mobile Turned creatures, that could explain respawning in universe and could also be useful gameplay-wise.

Xen creatures from Half Life 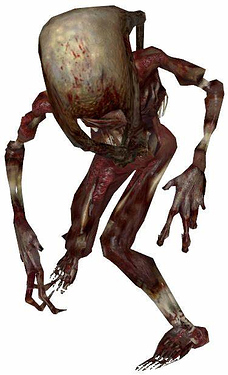 Yea, but I am pointing at having different kinds of turned like, for example canine like four-legged creatures. If you ask me, the Turned don’t have to be strictly humanoid.

My idea was having the zombie pathogen be capable of manipulating living matter within the host, forming biomasses that can protect them from headshots, or give them a combat advantage.

You mean like a Metroid Prime 2 type of thing? Weaker foes that were originally humanoid/earthly (IE normal zombies, zombie animals, like the Dark Trooper or Dark Splinter.) and stronger ones born out of the infection/virus/alien organism whatever. (IE Masses of living darkness bent on destruction, like the Ing born out of phazon.)

Big map and slow zombies don’t work, look at 3.o you can literally walk away from zombies.

They should range from…

Jogging zombies, you can out run them but can’t out walk them.

Sprinting zombies, run just as fast as you but they mantle, climb and change direction slower so you can still out maneuver them.

Some kind of special enemy that is faster than you, like the feral from state of decay there’s just no running away, you must fight it.