I don’t know if this was suggested before but I think theres should be a option in config to have a chance for vehicles to spawn locked, owner would of course be no one and you would need to get a Stealy Wheely to unlock the vehicle, but it should be a chance not a guarantee. In my opinion, it would make sence and would also prevent alot of people from just finding a car, getting into it and locking it, then just leaving it there.
Heres an anonymous poll for you to vote.

In my opinion, it would make sence and would also prevent alot of people from just finding a car, getting into it and locking it, then just leaving it there.

But that doesn’t really make sense because there would only be more locked vehicles, which you can just unlock with a stealy wheely.

But let’s say you are playing in a large map and you joined pretty late to the server where alot of vehicles were taken because most of them are unlocked by default, but the locked ones stayed because no one could be bother to use a stealy on a vehicle to just fill up there collection, this way, if you are in need of a vehicle, you can likely find one and use a stealy because whats the point of keeping it for something else if people are hording vehicles so I would see this as useful

Ive seen people who would take even the garbage vehicles and store them, just to prevent the new ones from spawning my guess is. That person probably wouldn’t even bother using a stealy just for that reason, he wouldn’t probably use that car anyways if he has alots of them so he would probably destroy it or leave it. That would give a player in need of a vehicle chance.

I don’t see how this suggestion would make a difference. There would still be useless locked vehicles everywhere, people wouldn’t want to unlock them (because it’s better to use a stealy on a tank rather than a random offroader) and most players on the server will be left without a vehicle.

you should be able to hot wire or break into cars without keys. if you break into a car then you’re going to have to drive around in a vehicle with a broken window and if you hot-wire a car you lose some of its reliability long-term.

While it’s true everyone would use a stealy on a tank rather then a car, likeliness of finding an actually tank in the open are small, im talking about late game here. People who join early would have unlocked cars, people who join late would have locked cars available to be taken cuz someone with a car wouldn’t be bothered to take it. And honestly, I would myself use a stealy on a car especially if the map is large, and something like a tank drains fuel while being really slow. In case you did find a tank in the open ready to be stolen, where would you go with it, you likely don’t have a base and if you do, chances of having garage large enough are small but you don’t need to use a garage of course, you can incase your tank in garbage and prevent it from being moved but that tank can still get stolen again.

There is place for this mechanic, but I see it in a bit different way. Let’s say you could find a lockpicking kit, that would use over time, and you could lockpick not only cars, but lets say not that complicated lock on bases, and even secret military locations, like locked rooms with experimental stuff. Not to add lockpicking mechanic from TES/Fallout it would still act like a stealy wheely. They would be different levels, but none of them could open best tier doors in player bases. Let’s say there would be 5 levels, and 4 lockpick sets, every set would be for it’s level, except level 5, waht would be best door. That would’nt be that complicated to add for developer too. So the vehicles would be lockpickable (idk if its right) with those sets. And for military vehicles there would be some sort of key that could be found in key room (where guards on military base are located.) Just an opinion of mine.

No, you are just another “whiner”.

The somehow resembling logic here is based on timeline: Those who arrived first have more than those who arrived late. Which means that the first arrivals will still have gather enough lockpicks anyways to unlock all the cars they want…

…and “your” only accomplishment is that… you just made it actually “harder” for the New Arrivals who now ALSO need to find a lockpick to get a vehicle where areas as of now, you can just destroy a locked vehicle and wait for a fresh respawn.

If they have a chance to spawn locked doesn’t this just make more locked vehicles in total, considering there’s already players who lock them and leave?

But it’s also worth noting that:

Something I have been noticing is that my vehicles are “de-spawning” ( the reverse effect ) and all the vehicles I have been losing are aquatic. They were all stored deep within my base and nobody raided my base to that length, jets and boats keep disappearing every now and then. 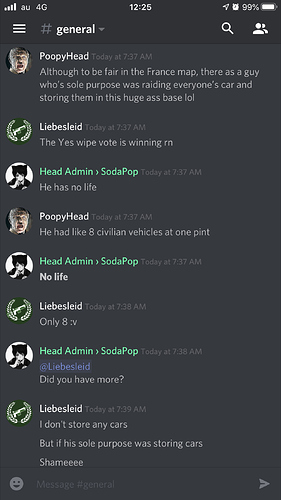 I’m a vehicle horder myself and had been doing it countless times in many servers.

Another problem is a new glitch that was introduced to the game somewhere in the beginning of this year which now causes armored vehicles to obstruct doors and gates from closing. I was playing in France when one of my team mates got so upset about the glitch that by the time I logged to the game… all doors where left open and I barked hard at him. One must relog to the server in order to shut them again, but some players have trouble loading a server and so they refuse to. Ever since I’m not parking tanks, APCs, Sagaies and helicopters

now need an exclusive tower where areas before just landing on your roof was good enough. Of course it’s best for doors or gates to open outwards the garage so that gates won’t be obstructed from closing but the garage gate suffers the same glitch too. I think SDG should be concentrating on these two issues rather lame complaints. Believe me, when I played Russia I even had three tanks and three birds within my base but after this glitch I’m not parking armored vehicles anymore.

No, i’m not wining, i’ve quit playing this game seriously, I just thought this idea would be great to discuss and maybe even a good edition to the game, I mainly host play on my own server from time to time. And I personally disagree with what you said

because that quote sounds like you mostly play on those 50x loot servers, and from my experience, i’m not that lucky at finding lock picks. Nor when I would kill people that I would see much lock picks, altho I did mostly play russia, I rarely find lock picks so thats why I disagree.

Now @MoltonMontro said people just destroy locked vehicles for scrap, thats true but so people don’t use that to get the vehicle unlocked next time it spawns, it would be good if there were 2 limits in place. One would be for the max of how many vehicles can spawn unlocked and other for how many can spawn locked. That would be sort of an exploit prevention.

And Yoshida, since you are fairly new here, it would be nice if you were a bit relaxed and not start off with a line

No, you are just another “whiner”.

when you disagree with someone in a post. It just feels aggressive tbh.

No, I’m not new here. I have been posting here in the forum, on Discord and even editing the wiki. I have also said multiple times that I’m a vanilla player and I disfavor mods… and not just in Unturned but every game. 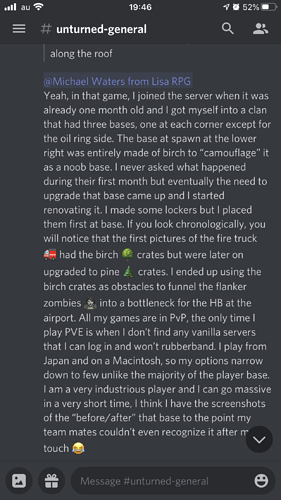 You are complaining about locked vehicles which is a low priority, it’s not a requirement for PvP nor for raiding.

Like I said before I have been vehicle hording for a long time in many occasions… if I can build massive bases with big ass garages… you can bet your arse… I would also have plenty of lockpicks just as much as metal scraps to make a massive garage.

Yea okey, joke gone through window, anyways it’s still not nice to start off with that line and im not complaining, and i’m not definitely complaining about locked vehicles, in fact opposite of that. I mean ffs, it’s a suggestion you guys, i’m NOT complaining or wining. Joke was you joined this thread late. I just thought it would be a good edition because extra features for server customisation is always good. I’m not hear to pretend like woman’s activist or some shit.