[1] Add turret rotation speed - because turrets can’t rotate light speed anyway
[2] Add new engine type “Tank” so we our tanks will be able to rotate in place and such (tracks with dynamic physics would be cool)
[3] Better armour and penetration system so instead of typing “invulnerable” you can decide if your front, back, turret or sides can be penetrated with this amount of mm or not. I think it’s the best possible idea for everything so you just set parts of your model to have different values of armour thickness so some bullets can penetrate it and some can’t (example 57mm shell can’t penetrate 100mm of armour) I’m quite sure it could be used for lockers doors walls anything basically and it’s still going to be better. Also a projectile richochet system would be cool for realistic WW2 tank battles
[4] Add walking inside bigger vehicles and allow us to make more types of doors in vehicles like tank hatches that we can close or open (and use it to enter or exit the vehicles) So instead of pressing the door to enter the vehicle and sit in it you can enter the vehicle and than press the seat you want to use (of course it’s optional for vehicles that are not planes and tanks) + let us animate them
[5] Let us make hitboxes for special vehicle parts like turret, barrel, fuel tank and similar that take more of less damage for example
[6]Switch firing modes option for turrets example solution switch with 1 2 3 buttons on keyboard

That’s all thanks for reading!

Honestly, yes. I agree. I also think there should be different tank models for various nations. The M1 Abrams for the US, the Leopard 2 for Germany, Canada, and other countries, T-90 for Russia, Challenger II for Britain, etc. That is if maps for these countries we’re to be added. I know that recoloring a tank for different countries would be easy, but I’d like to see different tank models.

I assume making a low poly model for different tank varieties would be less difficult than for other games. Just for simplicity, let’s assume that all the suspension types all work the same, the main difference being cosmetic and tank profile size. 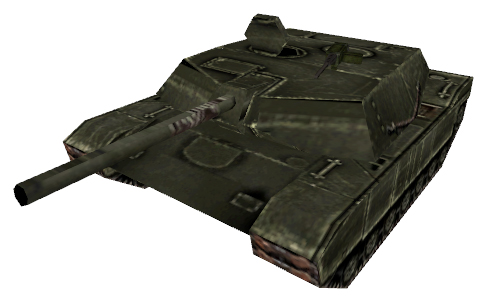 Let us make hitboxes for special vehicle parts like turret, barrel, fuel tank and similar that take more of less damage for example

I have said this several times and I never tire of saying, damage to vehicle modules is an incredible thing for the unturned II!
Having a damage to the engine of a vehicle and needing to repair it is very good and realistic, besides being fun for the game (not to be just realism for the sake of realism).

To continue this, I also want certain weapons to kill certain vehicles. An anti-material rifle like the M82A1 (Grizzly in-game) should not be able to kill a tank. Modern day MBTs use composite armor to protect itself from fire. The M1 Abrams that’s in US service uses Chobham I with depleted uranium plates for example. Not even .50 BMG black-tip ammunition is not going to penetrate the armor of a tank.

Black-tip .50 BMG could be able to penetrate and destroy low to mid armored APCs and IFVs, but not MBTs. I personally think you’d need an ATGM like a TOW Missile or Javelin to destroy a tank. Or even a high powered IED could be able to destroy a tank for players who can’t get their hands on a tank. There’s cases in Iraq of Abrams MBTs being destroyed by high explosive IEDs.

Things like an RPG-7 or an AT4 should be able to do 2-10% damage on a tank depending on where it hits, but it would take something like another tank, or ATGMs as mentioned before to do destroy a tank efficiently. An ATGM should do between 30-40% damage to an MBT.

Anti-Tank Guided Missiles
There should be two types of anti-tank guided missiles. The fire in forget variant, where you lock on to a target, fire, and move on. The missile will find it’s target and destroy it after the fact. The down side would be that the F&F ATGM would be single shot use only. One example of a F&F ATGM is the FGM-148 Javelin system utilized by the US Army.

The other type of ATGM would have to actively be guided by the player, as is the case with wire guided ATGMs such as the TOW. This would leave the player vulnerable to attack from hostile players with rifles. This type could also be mounted to vehicles such as a Humvee or Jeep, maybe even a lightly armored APC. Though the vehicle would have to sit completely still in order for the player to guide the missile to it’s target.

AT Weapon Tiers
Another suggestion would be a color tier for Anti-Tank weapon capability. The lowest being green with small arms such as assault rifles and the highest tier being red able to kill a Tank with one or two shots. 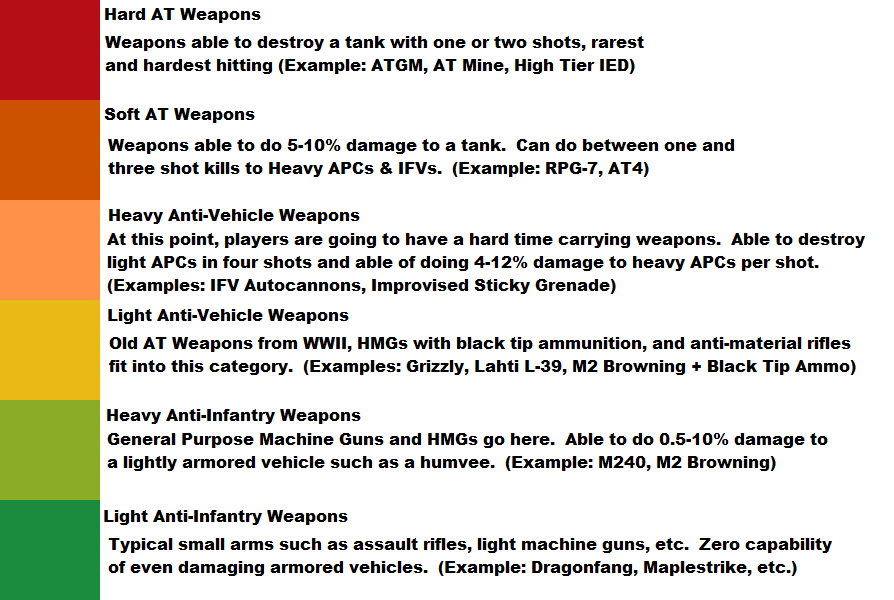 It’s not realistic to have a Anti-Material rifle do 5% damage to a tank. A Grizzly is not even capable of scratching the paint on most modern APCs. This is my general point and it should be fixed.
(EDIT: To balance this out tanks and armored vehicles should be extraordinarily rare vehicles)

While yes, I do agree that .50-cals and similar weapons shouldn’t penetrate modern MBT armor, a few shots from a .50 or a 14.5mm would definitely wreck the tracks.

[1] Fair point.
[2] Very neat idea, makes it more fitting for a tank.
[3] Advanced armor penetration and other systems will probably be added. If not, this could work.
[4] Quite interesting, but would cause some vehicle physics bugs and maybe lag. I like the idea overall, but I’m not sure how it would be implemented.
[5] Probably planned.
[6] Firing mode options for turrets? Do those even exist? (Sorry I’m stupid)

Overall some great ideas, some have issues such as causing glitches and/or bugs, such as [4]. If all of these were included in game, I wouldn’t be disappointed in the least.

The only issue I could think of is people putting an IED next to a metal base, then driving a cheap vehicle over it, suiciding and tearing off half an entire base because the IED was made for destroying tanks.

But either way, That sounds pretty good.

While it makes perfect sense, I fear that tank tread hunting with dragonfangs will be the new UII meta.

The Dragonfang is based on a 5.56mm light machine gun.

Really great job on your first post Kapec, most people usually blow their first thread. My favorite suggestion out of your list is the walking space inside of vehicles as well as different armor values for different parts of the vehicles. (Kinda like world of tanks)

Welcome to the forums, its a pleasure to have you and hope you stick around.

I’m making an assumption based on the fact that the dragonfang is a raiding lmg.
While a 5.56 bullet definitely won’t destroy tank treads, other weapons will.

tank tread hunting with rpgs?
I don’t know much about explosive weaponry

I was mainly speaking for the tank as a whole. Seeing tank tracks getting destroyed by certain weapons would also be interesting.

Plus, since every vanilla vehicle should have an interior designed for first person. That means that optics, vision slits, periscopes etc needs to be a thing. You know that driver vision hatch on the 3.0 tank? What if you could lower that for protection when you feel threatened and maybe use an elevated optic that does not expose you but is harder to see through? Most apc’s has firing ports on the sides or big roof hatches along the sides.

The possibilities are endless.
(Ok maybe we should not go full mil-sim but still)

You know that driver vision hatch on the 3.0 tank? What if you could lower that for protection when you feel threatened and maybe use an elevated optic that does not expose you but is harder to see through?

That would actually be cool as hell. Imagine the possibilities with vehicles if this gets implemented.

Nelson listen to this man, he has a good idea.

@Aden If that can be done with the driver, the gunner should be able to do it as well.

The gunner should not really be exposed from the begining since sticking your entire uper body out of a hatch is not really how you “aim” a turret. Unless he got some ww2 style panoramic sight? Looking from a hatch position is more for scanning your surroundings which irl is not the gunner’s job (unless you are talking about french ww2 tanks) but 2 should be enough for a video game, but I think a 3rd place should be available for someone like a commander role whit even more tools to scan their surroundings if you have a 3 man squad ready but 2 could be enough to do the job. Ooor stick whit only 2 to keep it simple.

Honestly, yes. It would be much better and more convenient. @Kapec

@Liljoda There could be three seats if one wants. In Foxhole, I’ve seen people use two to three guys in a Light Tank. Sometimes there would be someone on the commander spot, sometimes there wouldn’t. Crew preference can come into play.

Number of seats all comes down to how realistic the tank is. If people are locked into being in first person the whole time, then yeah, you need a commander to help spot targets. If both the driver and gunner can see in third person, however, the commander just becomes a glorified machine gunner.

That being said, if the commander had a periscope or something, that could be very useful for looking up and over hills and the like.

Imagine adding the Armor plates from Vests to things like Tanks. So you can armor your vehicle and personalize it a bit. I´d say that´d be cool too.

iirc soldiers did that in the 2003 iraq war since the humvees were not that armored
found a pic: 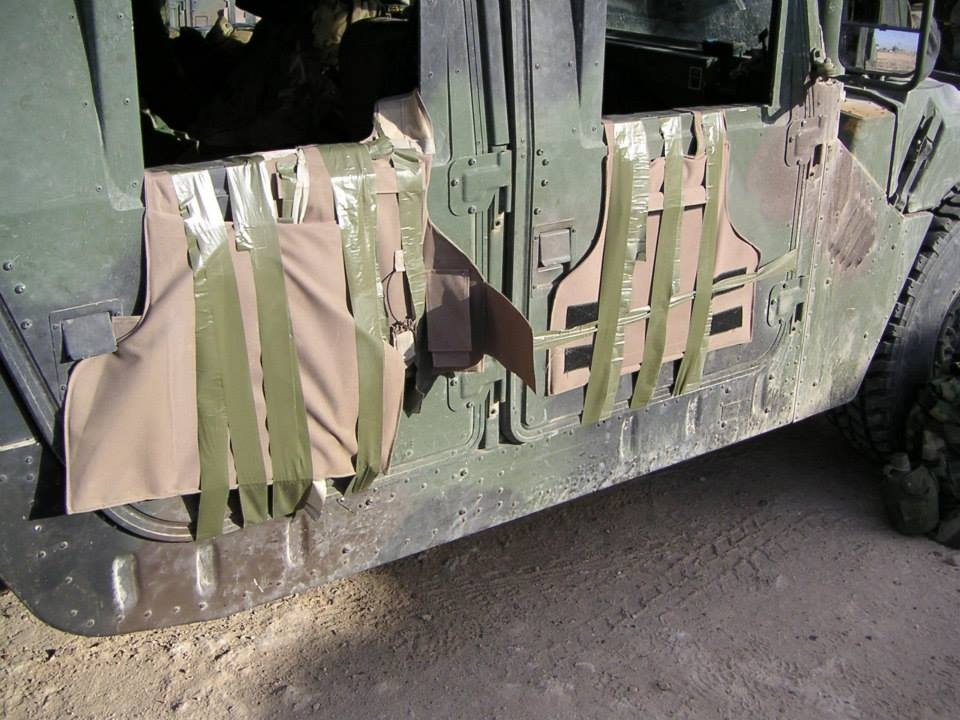