The BIGGEST Unturned Essay (That I've made) (Soon to be updated)

This an essay I have compiled of suggestions for Unturned 2. If even just one of these is added I will be a very happy man.

Unturned is well known for LMGs having the sole purpose of raiding, Sniper Rifles being outclassed by ARs, and shotguns being useless against enemy players.

Firstly, to make LMGs perform better in PVP, allowing weapons to ‘mount’ like in COD MW with reduced recoil may be a solution. Another solution would be to increase LMG damage and perhaps a slight range increase of particular ARs.

Secondly, to solve the issue of Snipers being outclassed by ARs in the field of distance is to reduce range, quite obviously, except for the Augewehr, because as an AUG class weapon it’s range should be close to that of certain snipers.

Thirdly, to enhance the PVP capacities of shotguns, all shotguns, unless equivalent to a fully automatic weapon, should 1 shot kill in CQC.

Weapon handling needs to be looked at in Unturned. In 3.0, weapons like the Maplestrike without attachments are laser beams, and most guns feel cartoony despite being in a survival game. Recoil and bullet spread needs to be adjusted to allow weapons to perform more realistically. Ricochet and penetration as well as durability should also be taken into consideration to properly simulate weapon handling.

Gun customization should also be taken into consideration.
Here are categories for attachments I could think of :

This has been talked about before, but better and randomized gun noises. Weapons having a metallic shine, and reload animations for when the magazine is empty the mag is thrown away when bullets are remaining the magazine is kept.

Bullets ejecting from the gun after being fired (coming out of the side of the gun) should shine and bounce of the environment with noises to indicate so.

Scopes should look realistic, like scopes in EFT, Insurgency Sandstorm, and various other titles. The crosshair should be removed.

Detailed animations should also be considered, and while they may be time-consuming, they will look good and greatly increase the quality of the game.

Environments, biomes, should look semi-realistic. Running water in rivers that actually moves players around if they are stationary or low on stamina, foliage moving with the wind, and a wide variety of animals will help with the survival aspect of Unturned 2. City environments should look destroyed like they truly were hit by an apocalypse. Vehicles should be somewhat ruined, skyscrapers should be crumbling.

Maps should have long sightlines for recon, where the best loot can only be found in the most dangerous locations. The days of having a Maplestrike with 10 magazines well within an hour should be gone.

Destruction should also be considered. Dynamic environments, in my opinion, should be considered in Unturned 2 because:

Modding should take up a similar coding to scratch.mit.edu, allowing for large modding projects to be conceived in hours rather than weeks. Exporting blender models to the modding suite should be possible, the interface should be easy to pick up on and allow for high-quality mods and maps to be created within short periods of time.

All good suggestions except that Skyscrapers dont fall apart that easily, instead creepers or vines on it would make more sense as would broken windows. Now can you please post an image of the Nomad and Coyote sights, to prevent such confusion kindly use the real life technical word(or the generic term) for these instead of a name from a video game, as it makes things clearer. Eg: sights like EOtechs can be called collimator optics.

And as for snipers vs ARs barrel length should be taken into consideration irrespective of weapon type, so if an AR has a shorter barrel it does less damage, has less range etc than a sniper rifle.

Have you read the forum and devlogs? Some of these things have already been confirmed they will be added.

Nomad stock is just a shorter stock that is faster than a normal stock HOWEVER it is less effective at recoil reduction. 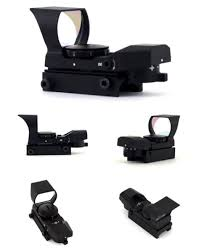 And for skyscrapers falling over I mean if someone has a large quantity of explosives, or they run into the building with a car like a psychopath.