The dark side of unturned by zman1064 me and zman dont really like each other but i do admit a lot of the things he said are true about the community, some of the admins in the official discord have a lot of flaws, some of them dont even care what happens in the chat room.

what do you guys think, did he get anything wrong? 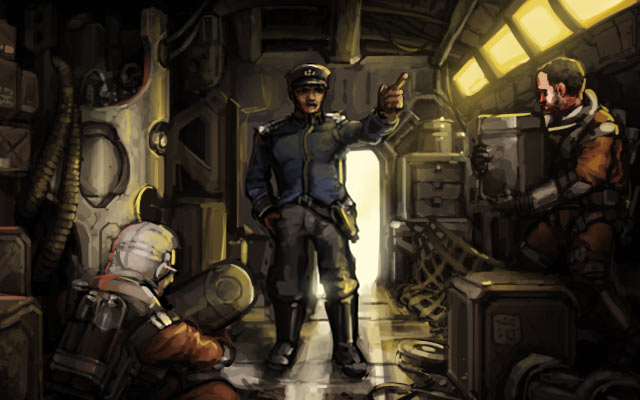 just watched the video and did they ban @danaby2 wtf why? free my man

what do you guys think, did he get anything wrong?

This is something I already spoke about on the server, but some of the people he spoke had misremembered certain things regarding the server (don’t personally know anything about the events he had with RP servers).

E.g., – the poll bot was only reset once, after a candidate had 100+ people join and vote specifically for them. I’m fairly certain Danaby (and other applicable users) have been unbanned since January, after I worked with Discord to change and clarify on how verified/partnered servers have to enforce Discord’s TOS.

EDIT: I know some of the things mentioned in the video are more accurate than other parts.

The first part is just a recap. There’s a lot of things I don’t really like but what can I really do, I don’t have much involvement there so I don’t really have a care for the video. The only thing that bothers me is people coming in acting like some big shot demanding justice.

Like, this is just annoying. You aren’t gonna solve anything by digging dirt 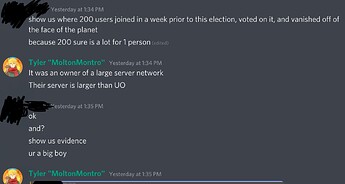 what part of ‘‘show us evidence’’ is throwing dirt though? that’s a pretty reasonable demand

Anyone with more than 2 braincells can understand the video was poorly researched. There’s plenty of stuff you can use to criticize Unturned official, but unfortunately not much time was spent researching. The server hosting bit was also weird, gave me the impression zman doesn’t know how server hosting works.

Very little evidence was provided all around, and I find it hypocritical that zman is criticizing the state of RP servers when he routinely posts videos of himself harassing kids on said servers, contributing to the mess.

is this true? what was the conclusion to the discord TOS thing, what did they end up saying?

the first half of the vid is bashing UO discord staff for behaving like your average public discord server mods, which is honestly just as cringey as it sounds
the other half is bashing some RP server network (that i’ve never heard of) for doing exactly what you’d expect from a generic RP server network on a free-to-play game

this isn’t dark side stuff, this is just surface level lame drama played up as !!ThE dArK sIdE oF uNtUrNeD!!

cmon, there’s hours of way more interesting dArK sIdE content from the forums, reddit, and third-party discords that can get used for a video

Couldn’t agree with @FalkenJr more, even if I very much dislike him.

even if I very much dislike him. 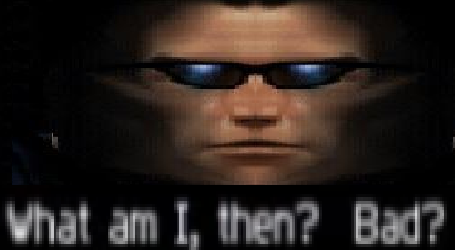 is this true? what was the conclusion to the discord TOS thing, what did they end up saying?

Looking back over it, you technically weren’t banned as you had left the server instead, but the policy change was in January. For other users, it’s an ongoing process but anyone interested in having their unban expedited can “appeal” since I’m having the TOS changes be applied retroactively. The relevant policy change (for you) is that “soft-NSFW” avatars (e.g., ahegao face) isn’t being moderated on avatars, only visually explicit and direct nudity.

What ended up happening is that it’s been clarified to me what issues verified/partnered servers need to concern themselves with. So, here’s the current version staff enforce:

These are the changes as specifically written for the server team’s staff to reference. Any server can still choose how strictly they choose to enforce/interpret Discord TOS, but the main things that are a legitimate concern to Discord are points A, B, and C. Servers are still expected to enforce other issues, e.g., certain slurs/vulgarity, but these were issues that were relevant to my inquiry, and reflect issues that players have tried to appeal permanent bans over in the past. Usually, Discord will contact the owner of a server that is failing to enforce certain issues sufficiently, but I know in the past there have been servers permanently taken down without warning.

Honestly not on the discord so I’m not sure how in character any of this would be, all I know is it’s really easy to doctor screenshots, so I’d be doubtful unless I could read the og post.

As for the rp stuff, nothing strikes me as big news, I have always been baffled about how blatantly p2w servers have an active playerbase, but I don’t personally play a lot of rp so I’m not very invested in the issue.

Going into the video I thought it would be complete cringe, it wound up being less cringe and more boring, most of the information I would consider common knowledge, discord mods ain’t always pleasant deal with and rp servers tend to be scams.

Final Verdict: Title is borderline clickbait imo, standard internet hissy fits played up as “the dark side of unturned.”

you have no right to say that yarrr when I’ve had to consistently fight an uphill battle to find out why my posts were being deleted. of course people want to know why you did something, you guys are moderators, they have the right to know.

Honestly, I heard the dark side of unturned was going to devolve into a nightmare considering I know how the forum gets so go and sip on orange vanilla coke and grab your bucket of popcorn cause shits boutta hit full speed

you have no right to say that yarrr when I’ve had to consistently fight an uphill battle to find out why my posts were being deleted. of course people want to know why you did something, you guys are moderators, they have the right to know.

That’s different, because you’re involved in your own problem that had little information to why it happened and so there is nothing wrong with you or another person on your behalf inquiring what’s up.

What I’m referring to are random people outside the server who only see a video or read from second hand information before going in as self-employed investigators when the incident has already been resolved/disclosed, or rather to diss on the people involved

I have to know why community Unturned Discord server ads get removed and are “not allowed” because there isn’t an Unturned server linked to it… While there isn’t a single sentence that says we can’t advertise it?
This happened like 3 times to me.

I personally like the mods, but some can be a real d*ck in the Discord server itself.

Personally, I think that when you talk about that specific moderator, it is completely true, I do not understand why they are so unfriendly people, as if they were annoyed all the time.
And the fact that they are always the same ones seems even weirder to me. Apart from the fact of the abuse of power they have when they don’t like something.
If I get banned after making this personal criticism, then I will be very disappointed as I am not doing anything wrong.