The nerve of this guy 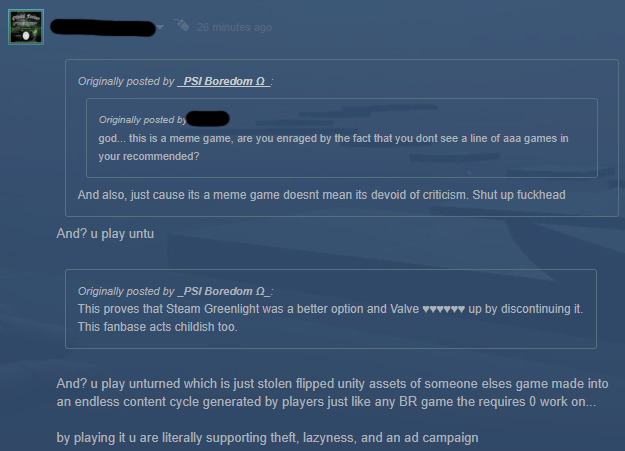 All my homies hate spreading false information about a game because you dont like it.

This was from some steam discussion boards on some shitty asset flip called “Scuffed Bhop simulator 2023 pogchamp” (Im not kidding thats what the name is like) . I decided to make a thread saying that good ol Valve failed us when they removed greenlight. A whole lot of crybabies replaied saying “its just a meme game waah” and this bloke replied spreading false info about unturned. Saying that it is an asset flip and is just a BR game.

do you really think the steam forums of some free made for fun meme game is really the place for giving criticism? Most of the people reading there really couldn’t care less and are just gonna troll you lol

I dont even think its a good meme game. And I feel that it feels like an insult to some devs who probably spend a lot of time on a game, and dont get much in return when they release it, but some shmuck then whipps up a “meme game” in a day and a half and after release, gets 1000 positive reviews and just has a fanbase of 12 yearold spamming pogchamp. I might be taking this a little far now that I think about it.

I mean I guess I can see where you’re coming from, but in reality here it just seems like a harmless free game made by a new game developer and if they got lucky enough for their scuffed asset flip to blow up I don’t really see any reason to fault them for it

There are plenty of nutcases in the Steam forum with hot takes. Unturned usually suffers from being mislabeled by such people.

But again you’re talking to people who glorify a free low-effort game, by starting a typical complaint thread. From what I saw on Steam discussions for some years, you don’t really expect to get positive responses who feel the same as you.

What does “BR game” mean?

Battle Royale. PUBG, Apex Legends, Fortnite.
Any of those.