So I thought I did the right thing to add trains to my map, but apparently they won’t spawn.

I added the following to the Config.json for the map:

Anyone have any ideas, or success with adding trains to custom maps?

Let me check my config file for my map. Because I have succeeded.

copy this but replace the propper numbers, also remember to change the config file back to a json file if you change it to edit it.
{
“Trains”:
[
{
“VehicleID”: 186,
“RoadIndex”: 6,
}
]
}
.
unfortunately the tabs in front of the things wont show. oh well. remove the period right above this sentence.

I made a quick example that you could basically copy paste on your config.jason file. Be sure that the RoadIndex you add is actually the same of the road nodes in your map. 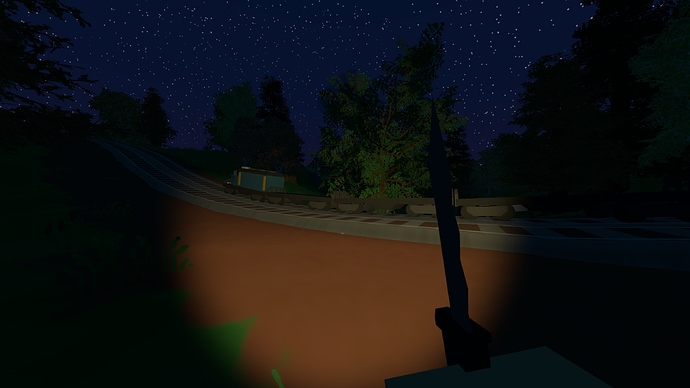 I also had a stray curly brace ‘}’ which foreshortened my config file before the trains were “read in”. Curse you nested brackets!!!

If you want a second train, duplicate the text below it

Also I advise if you add a second train, it’s the other type of train, also, trains can’t be on the same tracks. Btw

Is it just me or does that last train car lift off the ground?

Probably the terrain below needs to be smoothed out.

Actually it is just you.

It’s not floating, the land just slopes upward slightly. Look at the tracks behind it.

Now that i can test the trains I am doing a lot of smoothing for those rail tracks, to avoid messiness. Had to alter the tracks already to avoid catching on some parked box cars.

A whole lot of boulderized cliffs too… nearly the entire southern half of the map completed (getting carpal tunnel/mouse wrist, but it’s worth it … right?)

Yeah it is. Seeing something you have created come to life slowly… It’s worth it. Even if you don’t finish it for a year, it’s still worth it.

Also, BTW if you need help with anything, msg me or friend me and then message me.

Seeing something you have created come to life slowly

I released the playable map once I had NPCs all worked out.

Slowly updating as I find and fix glitchy terrain and other previously undiscovered issues.

It is difficult and time consuming to explore every nook and cranny of a large map by oneself. On the plus side I am familiar with the many shortcuts, and can generally figure out which spawn I appear at with a quick glance about.

Well once I get back I’ll msg you so send me a link and I’ll help ya.