Hello! Its NaturalEvo and I’m here to post a starter update for a map me and Regristy are making. We haven’t given a name to it so if you want, suggest one below! Anyways the map has been worked on a lot for the past month or 2 so. This devblog will be on the City and how I overhauled it in V 1.1.4 (We have all the versions on a g drive). None of this is permanent because we both change things as we work on things. Here’s a few pictures:

20190222190208_11920×1080 528 KB
That;s how the base city might look. Also in the bottom right (in the southern portion because this picture is take from East to West) I have furnished the gas station area, the school and gun store (don’t ask about position on the last 2). There is also a lot of stuff that will be underground like the sewer and subway.
Pic 2: 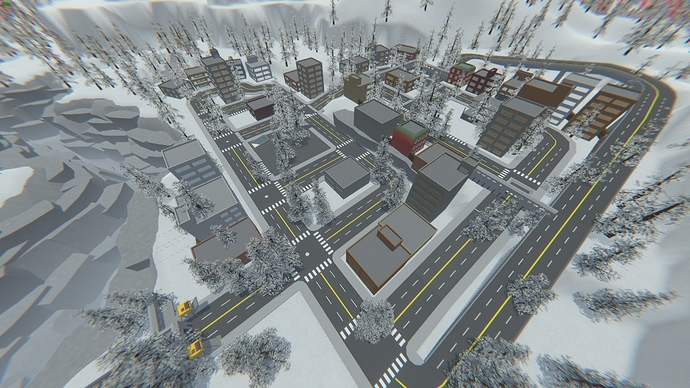 Looks like a really good map. Nice work on the cliffs.

Reminds me of Ural Mountains LN.

Will this map use vanilla spawn? Btw looks really noice!!

UraLN is’t that bad of a map.

In the picture 3#, you should’ve used concrete dock and fences instead of cliff and boulders.

I think he wants it to look like plowed snow though.

I tried using the dock and it didn’t look that great. Also if I were to use it then which one would it be, can’t use Greece or Hawaii so which. I tried normal dock #2 and it didn’t work so instead I used boulders

you mean cities, not city’s