Before talking about the rework of medicine, it is worthwhile to determine the modified mechanics of bleeding. Damage from bleeding will depend on the place of impact and on the type of weapon with which the player was injured.

From these conditions, the bleeding rate will increase by damage per second

(for example: if you get hit from a shotgun, you will bleed faster than from a knife).
Here are sample bleeding rates:

Second: 15 hp for 2 sec; bleeding slowed down for 2 seconds, complete stop after 20 seconds;

Third: 30 hp for 3 sec; bleeding slowed down for 3 seconds, complete stop after 10 seconds;

Gives health regeneration at 1 hp/sec, increases the regeneration of the initial stamina (without the influence of skills) by 7.5 point/sec, removing the restriction on movement - the player does not need to stop so that stamina starts to recover again. (valid 30 seconds)

Ideal to do in several steps, painkiller injection => suturing wounds

=> use of defibrator => blood infusion. It would be interesting to see the QTE system, for the tense situation. Will give a debuff (drunk effect). Also, the ability to customize the filling of the resuscitation kit looks interesting

,with this option you can apply buffs to the resuscitated player or increase his rebirth health.

/here it would be fun to introduce a tug of the player’s body, but we think that it’s too difficult also introducing the state of “death” when the player is lying and waiting for help (like in Rust, Pubg, Battlefield, COD, L4D and others)

The fauna in the game is very lacking in birds and fish.
These animals give the game world more liveliness. And of course I would like to see animals that already present in Unturned 3. Another element of diversity can be insects such as: fireflies (you can catch them and make improvised lamps), flies (they will fly over zombies or corpses, if they lie down on the locations), butterflies (decor), etc.

The flora in the game is missing a lot . We believe that flora should be made more interactive. Add medical herbs, shrubs, flowers, berry bushes (already present by the way), nut and fruit trees, etc. You also need to allow collecting sticks not only by chopping down the trees.

In our opinion The forest in Unturned is quite an empty place. When players are sitting in the forest in an ambush or for some other reason they are very bored, there is absolutely nothing to do in the forest. You need to add more plants to the forest, which we have already mentioned in passing in the FLORA AND FAUNA. But this was only the beginning, Herbalism will allow you to use all these plants, creating unique medicines and poisons. You should make an additional menu in which the player will need to upload several ingredients, recipes can be purchased in safezone or open yourself, they will be recorded after applying the created brew.
You can also enter special items:
mortar - for mixing reagents
herbalist’s bag - for storing herbs
glass flask - for storing poisons or brew

Redret or fire-grass - red flower, ideally should be located near hot springs in large numbers, greatly increases the temperature around them. If the player is around for a long time the player will overheat

Luminescent mushroom is a small mushroom that glows in the dark. Grows deep underground, in caves and metro, grows in small colonies of 2-3 pieces in one place

Algae - can be found in water reservoirs, in large quantities

Plantain - can be found anywhere on the map near roads, except for rocky terrain

Goodberry - shrubs with large clusters of pink berries, found in the Sunny edges of the forest, grow in groups

Corpsret - small black flower similar to a rose. Grows in the lair of a morph, in cities teeming with zombies, in graveyards

Voltret - grows near the transformer boxes, generators, places where the lightning strikes, Power lines. When it rains, lightning strikes all around. If a drenched player tries to rip it off, they will receive damage and stun

Edible mushrooms are a common champignon used for cooking. Growing in the forest, copiously spawn after rain

Poison smokey mushroom - a large porous green mushroom, when plucked, releases gas that will poison the player (You can protect yourself with a gas mask). It is located near rocks and in places with high humidity. They grow in small groups

Crossroom - is a small mushroom with a red cross on the cap, growing in rocky terrain, in small groups.

Oppenheimer flower - a radioactive green flower that glows in the dark, grows only in the dead zone, when collected by the player, it infects with radiation for 5%

To create it, you need: x2 Algae/ x2 Greenret 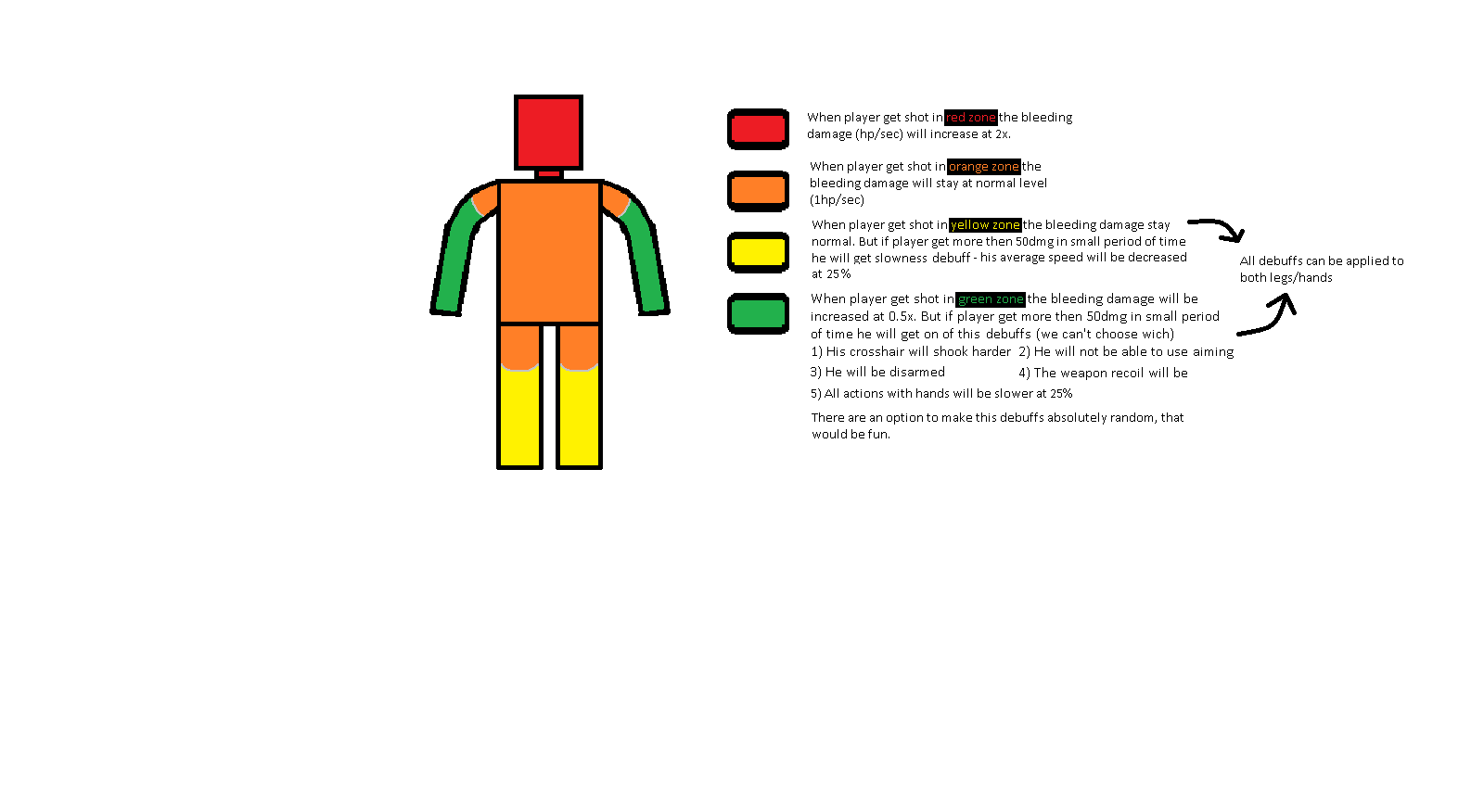 This is a mod idea, right?

Bleeding from blunt weapons has gotta hurt, but it makes sense that it has less health drain more due to the fact that to bleed with a blunt weapon takes a ton of force in the first place.

Before someone argues that this would bleed way more y’all have to remember that semi-automatic small arms such as pistols have a rule to them:
They always have a higher firerate than expected.
As such, it makes sense.

In all honesty, semi-automatic rifles such as Marksman rifles and Bolt-action hunting rifles should be classified differently from automatic rifles. They pack more of a punch per shot unlike the “assault” rifles, which rely on constant damage over a short period of time to do the work.
Firearms such as the Grizzly (which iirc is the Barrett M82A1) should do more bleeding than an automatic rifle such as the Maplestrike (Colt Canada C7), per se.

The heavier automatic rifles should still do around the same bleed as the lighter versions, simply because they pack such a punch in normal damage that the bleeding would just make it way worse. Shotguns and larger-caliber rifles make sense, however.

Bandages - for a short period of time will restore a certain amount of health, as well as gradually stop bleeding.

If it’s gradually stopping the bleeding, then it should be pretty fast. I don’t want to wait 60 seconds to stop myself from bleeding to death, especially if I’m already at low HP in the first place.

Stopping bleeding after 30 seconds is kind of a yikes to me, seeing as you can lose a pretty good amount of health in that time period. It does kind of make up for it by lessening the overall bleeding as it progresses, so that’s good. Imo this should be lowered a bit to make it more balanced, but could probably work just fine.

Will likely work fine, they’re all bandage tiers so not that big of a deal. Better healing items exist, so as long as we’re not stuck with bandages this is okay.

Tourniquet - completely stops bleeding, but it only works for a few minutes (within 2), at the end of this time, the tourniquet must be removed, otherwise some damage will be done. /this is a reference to real life, where if you over-hold the tourniquet, tissue necrosis can begin/

Kind of like a wearable, but you have to take it off after a certain amount of time, seems doable.

Personally I’d rather it restore the health over a period of time (albeit a very short period) instead of immediately, but both would work.

A syringe with morphine - works like a painkiller, but for a longer amount of time - 40 seconds and with a regeneration effect of 2.5 hp / sec. Also gives a 10% slowdown, and slightly impairs coordination (drunk effect)

Do these not immediately restore health like painkillers?
Also I know that morphine is a narcotic, but you only get the “drunk effect” if you use it too much.

Tire - unchanged, can now be used on hand

I thought of a car tire, what do you mean by this?

The fauna in the game is very lacking in birds and fish.
These animals give the game world more liveliness. And of course I would like to see animals that already present in Unturned 3. Another element of diversity can be insects such as: fireflies (you can catch them and make improvised lamps), flies (they will fly over zombies or corpses, if they lie down on the locations), butterflies (decor), etc.

I’d love this in a non-pvp server, but I think that sometimes in large pvp servers this could be ignored for a majority of the time.

Was there a thread about this previously or am I retarded?

Herbalism will allow you to use all these plants, creating unique medicines and poisons.

I’d honestly just settle for makeshift bandages/medical kits, too many healing items is a bit crazy.
Having this as a mod would be really nice, though.

Some herbalist and more gardening shit would be nice. But it would also be just as nice if it was a mod.

I thought of a car tire, what do you mean by this?

I love the idea for different plants in the woods that have different benefits.

Thanks for your opinion!