Dumbest, most incoherent Unturned video I’ve ever watched. This guy did ZERO research and it shows.

cleared with a knife if the server has no spitters

Do you mean burners instead? Those can be avoided with firefighter clothing though.

Zman is view hungry, he doesn’t care about unturned, he only cares about views lmao.

What’s sadder that after he got negative feed back he started to play it off as if it were a joke video.

Not quite. From my experience with meleeing hordes (which I will admit, is not much, I generally just pick up every single ammo I can find and spray them down with it), the sprinters cannot always be hit consistently unless the server has minimum ping, and there are scenarios where you simply don’t have enough meds to use them all up just yet. You can avoid them by clearing hordes the same way you clear megas - finding a cheeky spot where they cannot hit you and melee them from there. But that’s where the spitters become problematic.

He cares about Unturned. He’s just a bit rеtаrdеd or disabled person. (By “rеtаrdеd” I doesn’t want to start hate-speech against this man, this is just part of his behaviour - trolling, minorunderstanding and sometimes even harassing other people for unproper behaviour)

The only point I disagree with is the first one.

“Worse than Maplestrike” doesn’t mean this is the worst weapon in the game. This unique gun is balanced like the others, and its RPS (being highest in a class of machine guns) along with, of course, using the adaptive chambering, can even beat previously mentioned meta gun. Of course, the Hell’s Fury have some disadvantages, being rare, having less accuracy and needing for player to aim for shooting. But this gun sometimes is highly useful, because of it’s situationality - like bows and the Crossbow.

Yes I absolutely share your opinion, but I am fully disagree with your take on P9nda vs zman1064 drama. He made this preview only for views, and the part of the video where he was talking with cucuycharles was just a bait to get Kevin’s attention.

Dumbest, most incoherent Unturned video I’ve ever watched. This guy did ZERO research and it shows.

Never claimed it was the worst. It’s an inaccurate Zubek with even more firerate. Unfortunately, most encounters in Unturned happen at medium ranges, where Fury overstays it’s welcome. We all love and appreciate the expendability of the Crossbow (which is personally my go-to weapon on Yukon til I gather enough ammo to afford using a rifle) and the base defence capabilities of the Bluntforce, yet we don’t necessarily call them “good pvp weapons”, do we? Or, actually, maybe we do - this I would say is more of an argument about what you define as a “good pvp weapon”, rather then how effective the Fury actually is.

Yes I absolutely share your opinion, but I am fully disagree with your take on P9nda vs zman1064 drama. He made this preview only for views, and the part of the video where he was talking with cucuycharles was just a bait to get Kevin’s attention.

Please elaborate. IDK about what is the drama between them but making the conclusion that P9 is responsible out of Nelson’s comment is irrationality at it’s finest.

Please elaborate. IDK about what is the drama between them but making the conclusion that P9 is responsible out of Nelson’s comment is irrationality at it’s finest.

How do I call it…
This was… a troll. Trolling and basically trash-talking about P9’s role in this situation. Again, this is just to get P9nda’s attention to the video.
Explaining the whole situation and it’s story: zman baited him by making that exact video, P9nda started streaming on Twitch to reveal, showcase and then try to argue on video’s points and his viewers did views for zman. So yeah, in other words, this was a bait to get more views.

I see. Thanks for clarifying.

I don’t wanna write a long ass post, but I would like to say a few things:

For starters, explosives in Unturned have pretty much just those 2 recipes (+1 for rockets), be it a charge or a horde beacon, it’s just an almost common resource which sometimes you’ll pick up and totally forget about until you get to your base and start to sort your items out; yes, it would 100% take more time to make a charge (not to mention finding a detonator) than to raid with a Dragonfang, but I don’t think this is the point. Charges deal area damage, the Dragonfang does not, thus, I do not think it is a fair conclusion to put one against the other and declare a winner - although I will say that I personally prefer raiding with guns than to raid with charges simply because in the heat of the moment you can… you know, shoot someone with them. Something else that I’d like to mention is that, if given the possibility, the luck, and the resources, raiding with a tank or a rocket launcher is without a doubt a superior method, but that’s simply because Nelson clearly made it that way due to their rarity.

For point No.5, I’m going to have to totally agree with what @Elliot said.

I am sorry that you feel this way.

Funny thing is he bullied and harassed a guy with mental issues, he also lied about him to cover it up.

No, he confirmed everything when he was talking to P9 with Dug and deleted Doggo/streamer

trolling/harassment video? Also I think we need to stop being irrelevant to the topic.

The video was called “How P9nda Ruined Unturned Raiding” before it got renamed and the thumbnail changed to something more general after getting some backlash. 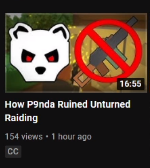 Unfortunately, this isn’t the first video that I was brought up in where I was portraiting as
“the evil person”. His community is built up to spread hate or raid whatever is being spread
(tweets, videos, channel posts, steam profiles, steam mods …)

I also didnt check what exactly he removed from that video, but in my screenshot you can see that the video used to be 16:55 long. I watched it during one of my streams so its easy to look back what exactly it was (if I find the energy to do that)

Overall his takes in that video are mostly terrible, most of them didn’t have any good research being put in or are straight made up. This video could not exist and no one would lose out on any true information.

I also dont quite understand how they do agree with the fact that it used to be OP and wanted it nerfed, but then blame me for also agreeing with it, as if I forced nelson to do these exact changes.

I agree Horde Beacons were just crazy OP hence everyone did them like every time.
Some people now might feel like its useless just because the difference of how useful it is compared to back then, is very high. But overall I feel the Horde Beacon is in a really good place at the moment, drops some good PVP guns and can be useful to farm tons of XP. If you have an extra detonator there is no reason not to go for it. If you only have 1 then keep it for demo charges

I will just say that I didn’t change the title because I was getting backlash in fact the video has gotten a pretty good reception from the general audience of Unturned, it was my initial intention to change the title like that in fact the title card in the video is the title that it has now which is “The Problems with Unturned’s Raiding Update”. Finally I’d like to state that the video is probably around 60% my opinion, obviously some people have agreed with my video and some people have disagreed with my video and that is okay.