So this may be short, but I’ll add others ideas to this as well. So y’all like destructible stuff right? Well what if in 4.0, there’s a sort of button on the side of the hud, that when you have an object selected, you can click the switch and make it destructible. Have to go, bye xd

There will be no editor, Nelson has said this multibal times, we will just use the Unreal Engine.

Yeah, send a link. If we have to build maps in there I’m be ticked. 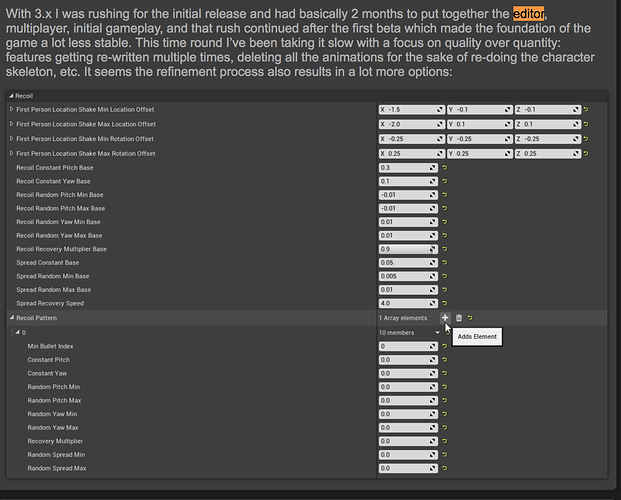 I’m sorry if this isn’t enough, but I’m in a rush at the moment, when I get home I will provide more info if I can find anything.

Dude… That just says that he’s gonna take more time to put everything together xd, he rushed on 3.0 so he’s going slow on 4.0
.
His focus is “quality over quantity,” meaning he’s working the stuff to be easier to change later in the game and also adding support for more types or workshop items like homing missiles, larger maps, ect. If nelson removed the map editor, he would lose a large portion of the playerbase" dang auto-correct

There will be no editor, Nelson has said this multibal times, we will just use the Unreal Engine.

The modding tools are built off the Unreal Engine just like for any other Unreal game, which will (as required) be downloaded from the Epic Games Launcher.

I’d consider that an editor, honestly.

If nelson removed the map editor, he would lose a large portion of the playerbase

I don’t think this was being implied by Spebby, I think he was trying to say the “traditional” editor we’re used to for making maps won’t be a thing as far as he’s concerned with looking at it.

I think that’s a poor way of looking at it though since it’s still an editor, and it still does the same things (like making maps). In a nutshell: it was likely just being more picky word choice.

A level editor will still exist for making maps, even though it’ll far closer resemble the Devkit than the classic editor.

BTW, if you read the bottom of this post you will notice how he said he made tools to make level design quicker. And that the placing of buildings and crap will still have to be done manually. So basically, I’m pretty sure an editor will be in 4.0. TBH, if I have to use unreal engine and try to figure out how to use it I’m be ticked.
.
https://blog.smartlydressedgames.com/unturned-4-x-devlog-007/#more-268

so unturned 4.0 will be on EGL and Steam?
Is EGL that popular that it’s even worth it to put it on there?

No, and yes, but mostly no.

Ah yes so multifunctional, now we will probably get a stream of fortnite players into 4.0

Fortnite players (people in general really) typically don’t think “oh I want to look at modding tools for other non-Epic Games games today in that list off to the side and learn what games I can mod if I wanted to for some reason!”

Some people might do that and be all like “oh, look at this random game I guess I’ll go download Steam and play and check out!” but they have no incentive or reason to do so, considering all they’d have looked at is a tool for modding. So I guess you can call it multi-functional, but it’s an unintended function. One can call anything multi-functional.

Regardless, you generally don’t pull in gamers from other genres either. Unturned is hardly a dedicated battle royale game. It’s a bit closer to the PvE experience of Fortnite, but that’s about it.

acknowledges the existence of the original co-op based, non-BR Fortnite

Source: I learned about Fortnite’s development 2 years before its release, at the time I was considering purchasing Gold for Unturned. That was a long time ago, but needless to say Fortnite is still very new.

Yeah, the kids say it’s been in development since like 2007 xd

Can’t you edit the “playground” to playerbase since I fixed it? Xd sounds like the unturned playerbase is at a playground xf
.
Edit, thanks