95% world of warships coupon(Will be traded through steam) 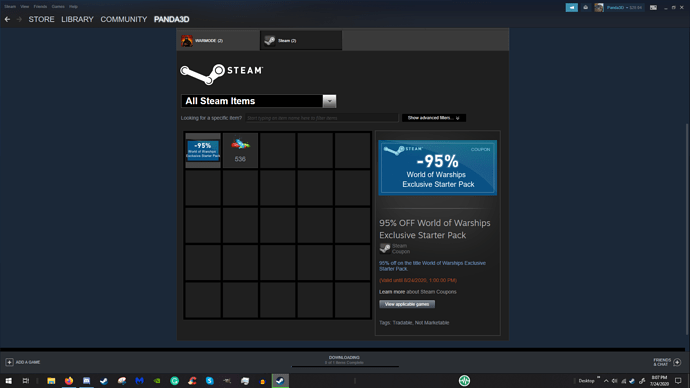 Seems like they’re giving these out to everyone, because I got it too.

War Thunder is a much better game. Fuck you wargaming I still won’t buy your crap

War Thunder is a much better game.

In terms of current game balance, I think Wargaming is doing an infinitely better job than Gaijin. BRs are super compressed and without premium the grind is a nightmare. I’ll still play War Thunder over WoT/WoWp with the exception of WoWs which I think is better casually than WT’s current naval system, but far from perfect, especially with the recent Pay2Rico fiasco. It also makes a significant difference that I almost exclusively play Arcade Aircraft at lower to mid-tier (3.0-6.0 BR) and thus dislike Wargaming’s one-life system and WT successfully implemented combined arms gameplay instead of 3 separate games, although Close Air Support is a cancer that must be solved immediately as it’s probably worse than WoT’s infamous Arty Spam issue. Another thing that puts me off is the purchases. $60 will get you a premium vehicle in both games, but in War Thunder I can bring that out among other vehicles, whereas in WoT/WoWs I’m locked to that specific vehicle for the entire match. However this also has it’s drawbacks. In War Thunder I can (and do) have a massive 10 slots full of planes from 3.0-4.0 infamously nicknamed ‘The Deck’ that I frequently use to bully new players. The 6th(?) slot onwards cost premium currency, so new players need to pay to get it or use GE Wagers to unlock in F2P.

got one too, and I don’t even play the games

dm me if you want it, I don’t enjoy garbage so I don’t really have a use for it

@Panda3d
It’s alright in my opinion. No idea why though.

It’s a free game how is there a coupon for it lmfao. Also what Armaros said is kinda on point, the close air support is completely balanced in war thunder. People that can’t use their machine guns to kill an incoming plane in the game are just complete apes.

It’s a coupon for a premium Starter Pack