Aggression idea for Zombies in 4.0

I feel zombies in unturned 3.0 are very underwhelming and serve no threat. I have an idea to make them a threat especially during loud gun fights. There could 4 different zones of aggression the zones should vary on the loudness of the gun. Zombies will wander outside of city limits and pick up pace the louder the gun shots get. On the diagram below, the green zone should be the farthest aggression zone and when in the green zone zombies do a slow walk which is the equivalent of a crawling zombies pace in unturned 3.0. After the zombies are in the aggression zone for a certain time or hit the 3rd zone the blue zone they will go to a normal walk the current speed of a standing zombies in unturned 3.0. Once the zombies hit the orange zone they start a jogging pace which would be faster than a standing zombie and slower than a sprinter zombie. When they hit the red zone they start sprinting which will be slightly slower than a current sprinter zombie. There should be a defined city limits where all standing zombies are docile and go no faster than a normal walk, but get enraged and immediately start a jogging pace when they leave the city limits. 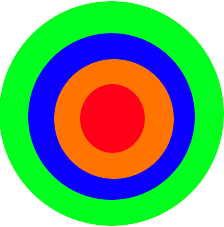 I like your Idea but I think it needs some work, as this wouldn’t really be realistic. Maybe you could adapt it in some way, such as how FAR they detect you from?

Correct me if I’m wrong but wouldn’t this destroy peoples computers?

Uh… I don’t actually see how it would… unless you are running unturned on a GT9300S with a Pentium 2.

I was overexaggerating , I’m saying that it would probably cause lag.

It good but there should be an alert system for the game so when zombies are coming you have enough energy and firepower to shot at the player and the zombies if I made sense here than yea and zombie should run like black ops 2 zombies when no player is in that certain area then run to find them if you know what i mean what am saying is if player is making noise right when the zombies hit the 5th stage of being anger than run very fast to reach noise it awesome and the zombie should have a good running speed so it fair to the player and other.

what about not clipping through them