Air riflles, air pistols, paintball guns, and flamethrowers as well as some pellet guns, BB guns, and nailguns all require pressurised gas to function. (Some use springs, or boosters.) Nelson stated in one of the 4.X Devlogs that chainsaws may require gasoline in 4.X. I hope that the paintball guns (and maybe other weapons/tools in 4.X) will require diving tanks, or propane tanks to function and drain those tanks with each shot, but will themselves have higher durability than their 3.X counterparts. While I’m on the subject of propane, I hope 4.X has propane which could be used to power propane stoves, lamps, and generators, as well as be used to power certain weapons. Maybe an additional type of fuel that would function as jet fuel, diesel, and napalm could also be added.

I’m pretty sure you don’t use a propane for a paintball gun xD. Explosive paint ballz much? But, yes i do agree about the air canisters.

Green gas is just propane with lubrication mixed in 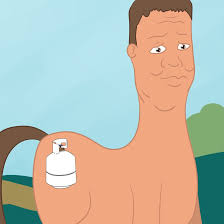 On the topic of Airsoft guns, I think they should be added for the goal of tricking/“trolling” the player into thinking they’ve just found a really high grade weapon in a house, and that would especially make sense if the map is set in Canada since most Airsoft guns don’t have orange tips.

On the topic of Airsoft guns, I think they should be added for the goal of tricking/“trolling” the player into thinking they’ve just found a really high grade weapon in a house

All that’d do is increase KOS infinitely.

I personally see no reason for airsoft weapons to be added (nor the paintball gun, but hey).

If any sort of joke weapon comes back into 4.0, it ought to be the Nailgun. I think a BB gun would also be fine. Those both could actually do some real damage to someone (if you got lucky enough). A paintball gun is just gonna bruise you up a bit (less so in protective clothing), and an airsoft gun even less so.

with any sort of non-soft clothing on the “joke” weapons shouldn’t do any damage. A few weeks ago in 3, i got attacked by a guy with full military gear and a masterkey, i killed him with a paintball gun. that is what not should happen

For reference for those curious, under the assumption that everything (guns and normal military gear) is full durability with the target having full hp and only being hit on the same body parts consecutively before healing or regenerating hp:

I have a few questions
Why does the Paintball gun do more damage on limbs than the chest? XD

(To clarify: vests and shirts will both have their armor function when being shot at the torso.)

I’d just like to have many options, both early in the game, and later in the game.

The only bad thing I see about this idea is the fact that it will increase the weapon pool. But other than that, these would make some good low-grade weapons, and if the ammo and gas is common enough it could probably outperform some pistols.

have to be honest, its only unturned where you can kill someone with a paintball gun.

This is a 4.0 suggestion and we all know Nelson is pushing for realism.