An exploration of video game models

When I was a poo-poo baby I watched a shit-ton of Minecraft animations, so naturally, I wanted to make one. So I searched up “How Minecraft Animation” with my Polish little fingers and a bunch of Blender tutorials popped up. That was my introduction to Blender. It was hard, it was complicated and I quit immediately. But I kept coming back every time I got the itch. I got better, and eventually, I got animating! I didn’t finish anything, but there was this weird feeling when I saw my Minecraft skin moving around my world in Blender, exactly the way I wanted, it felt very freeing, almost like a door was unlocked somewhere, and I could hear it unlocking, anyway.

A similar thing happened in 2018, I haven’t been a blender user for years at this point but I watched a shit ton of Overwatch animations. I tried to do it in SFM but it didn’t feel right. I wanted to animate exactly how they did at Blizzard, unfortunately, that required I make a rig myself. It was foolish, but I tried nonetheless. This was my first venture into rigging. It was hard, it was complicated, and I tried like crazy over and over again, learning a little bit each time. I made many discoveries, that I didn’t understand, like…

These weird bones. What do these bones do? Why are they here? Why are none of them named? 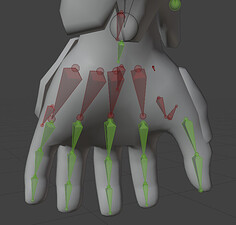 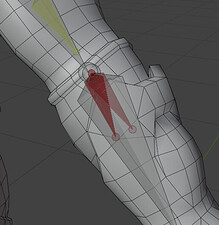 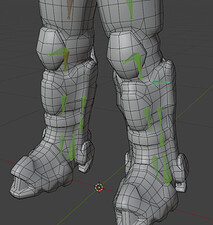 I left those weird bones for later and made a bunch of garbage rigs and animations that I was proud of, but I knew I could do better. It was at this time I heard of something called “topology”, and apparently, it was pretty important. Topology basically describes how you model the model. It’s a really broad topic, and every youtube video about it bored me to death, but basically, all these exported models use triangles instead of quads, and that’s apparently bad.

So I found a neat shortcut in blender that does exactly what I want.

But it didn’t work perfectly… There were these weird spots, where the topology would break. 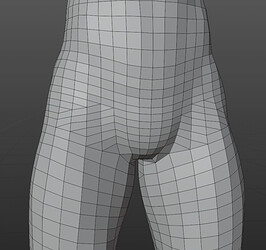 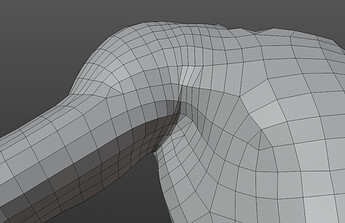 These require manual “quadification”, that’s where the learning happens. You get a feeling for it, how stuff looks and bends, it’s very satisfying if a little tedious. 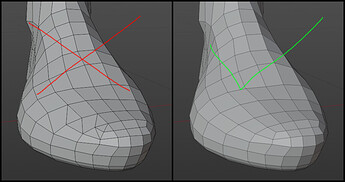 Now, look at this guys ass. 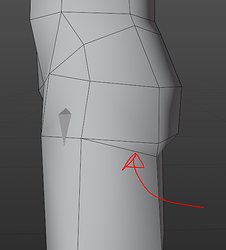 image535×590 76.1 KB
Oh no! It’s got triangles! But, it’s fine because it’s low poly, and triangles aren’t actually bad, they can be useful! They’re just bad for big models and big productions because they use subdivisions and that doesn’t matter in video games (for the most part). Look at the big red arrow in the picture above. This triangle is used to maintain the volume of the ass when the leg is stretching

Look at that stretching! *And nothing else. 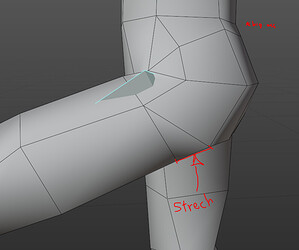 Now look down here, this is called a “pole” because it’s got more than 4 quads attached to it. In this case, there are triangles too, but they’re there to maintain volume. 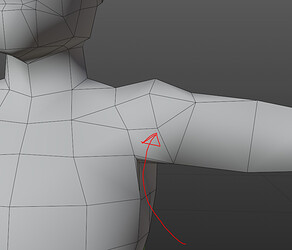 image911×779 58 KB
It’s placed here because that’s where the arm rotates, and with some clever quads and triangles

You can preserve all the volume in the shoulder. 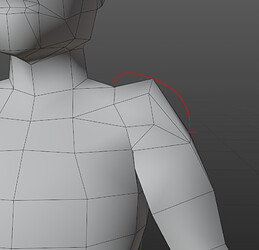 Locked and loaded with all this knowledge, baby brain me in 2019 or 2020 decides he can do his own models now. 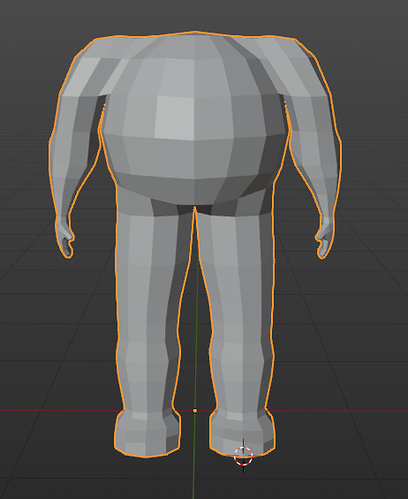 I don’t even remember making this. I think that’s a good thing. 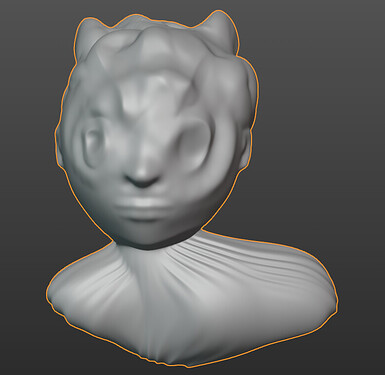 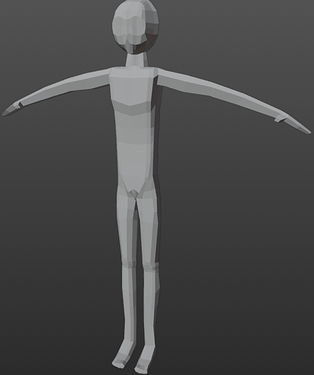 Eventually, I got better 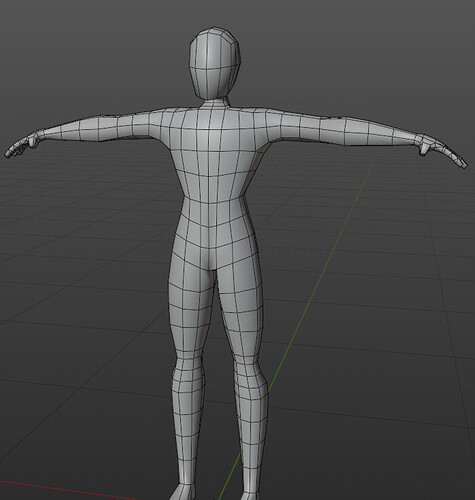 Creating a skeleton. I lied, that part isn’t hard, It’s the weight painting (which determines the influence each bone has on the mesh). I would always fail miserably during weight painting. 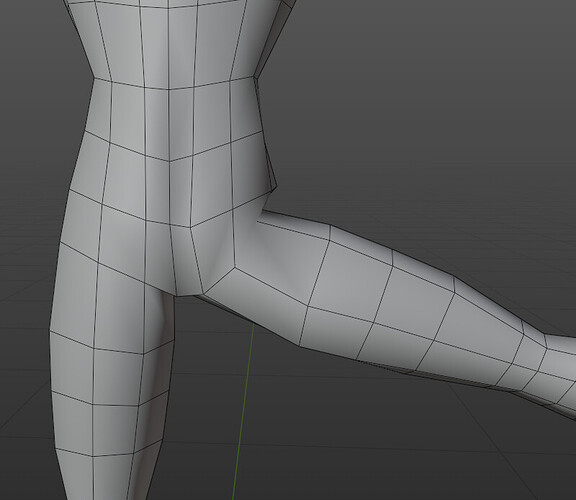 image800×694 48.6 KB
I would bend the leg, see it looks horrible and think to myself that I couldn’t do it right because the professionals have all the weird bones that probably do some crazy stuff and have some secret weight painting knowledge that makes it look good, I gave up entirely after that.


So, some years pass and I do a bunch of stuff until Fortnite releases Spider-man as a skin. I think “that’s awesome, I want to animate Spider-man!”. At this point, I’m comfortable with rigging, modelling and animation, and I thought I’d be good to take another crack at creating an industry-standard rig.

These scary bones are abundant now, they’re at the shoulder, the chest and arms (hid some bones for showcase purposes)

(confusing bones highlighted in blue)1121×521 94.2 KB
They scared me a little, but this time I had a plan. Because of how these skeletons are exported, you can apply emotes from the games to them, so the Idea is I get an animation from the game, and I look at how the bones move in relation to other bones, and figure out what the weird bones do! That way there’s a chance I can figure out how the big boys do their stuff!

Turns out the weird bones I was worrying about all this time didn’t do shit, and all that time was wasted. Believe it or not, that was a relief for me!
But I dug a little deeper, only to find that the weight painting sucks too! 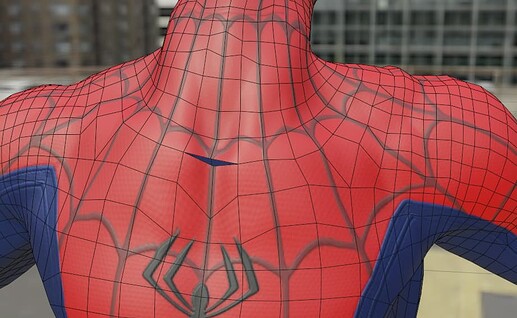 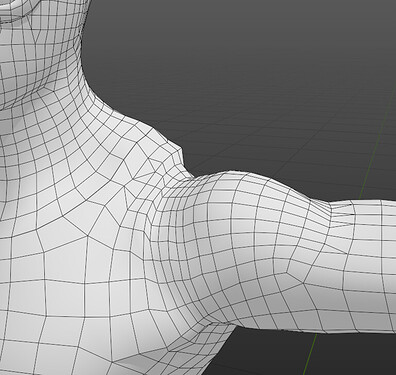 The forearms bend like noodles, the vertices are not smooth at all. 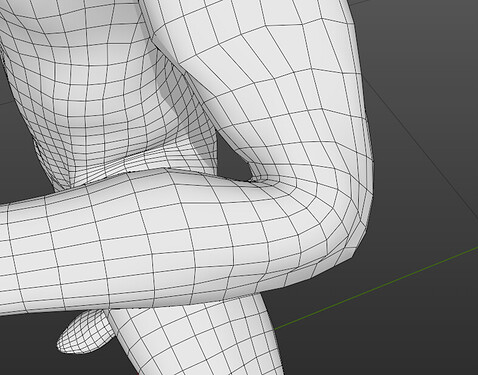 And I think to myself, “Damn, this looks dog shit”, but I played the animation again, and I couldn’t notice any of the problems. And that’s when it hit me.

My problem was looking at each bone individually. I’d bend the leg aggressively in one direction, see it in wireframe and think that’s unusable, when in fact it is. A character is never going to bend their leg 90 degrees to the side, without bending their body and hips, and the animation is never going to be in wireframe! I should be looking at the skeleton as a whole, not individual parts, because it’s easy to criticize a puzzle piece as an artwork, without considering the picture it creates. 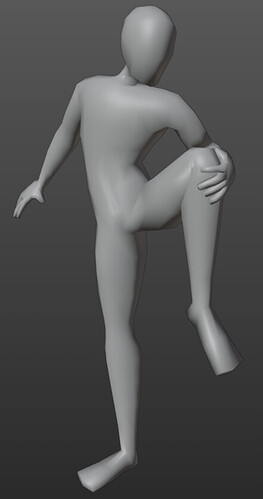 Thank you for my ted talk.

Interesting. Most I’ve ever done is animate the unturned playermodel doing a dab.