An idea for a survival variant: Outbreak-Survival

Okay, so I’ve been thinking of a game mode other than Arena and conventional survival. I haven’t seen this done in many games yet, but what if there was a variant of survival in which you’d have to survive the initial outbreak of the zombie plague. Like how one sees in many movies the beginning of a zombie outbreak for example.

So in the first few days, you’d go about your normal life with a random set of daily tasks. Whether it’s doing your “job”, shopping for groceries, buying something, kind of like tasks in Among Us to a degree but you do it for an hour or two to lure you into an illusion of safety. One day, you do your normal tasks when all the sudden you hear a scream or are attacked by a zombie and you fight it off. From there, shit starts going south.

Civilian NPCs start getting infected left and fucking right, the police can’t deal with the rioters and bandits caused by the chaos, and the military has to be called in, and eventually the military is over run and now the entire map is your typical survival map and the game “ends”. After these events it’s a normal survival map with some survivor settlements here and there.

I came up with this idea because there’s indeed a lot of zombie games, but not that many focus on the beginning state of an outbreak, and even less that are open world survival games that focus on the initial outbreak.

This would actually be nice as a tutorial “level” as well, the player can be introduced to basic skills and stuff, and sets the tone for the game. It also allows the players to see the glory of the region before the apocalypse and after it when they play the game. This is kinda like the sanctuary hills sequence from fallout 4.

I’d play the hell out of that

I honestly love the idea of a mode that takes place during the opening stage of the outbreak. It’s been suggested frequently in the past but I thought I’d heard of it somewhere officially, so I tried to do some digging.

Couldn’t find what I was originally after, however I found something else from the Wishlist Trello that is still intriguing: 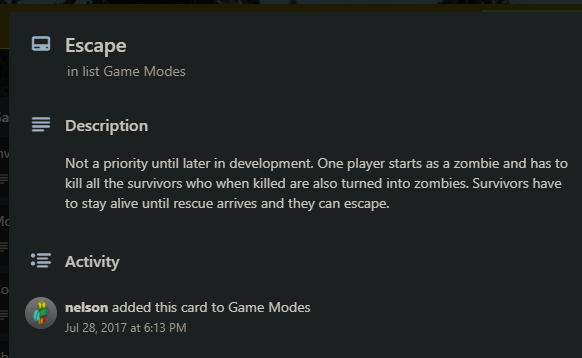 I think it should be applied for both single player and multiplayer, in other words I think the game mode should be called Outbreak Mode. In both modes there’s a lot of NPC humans that can be turned into a horde of the living dead. Maybe a few scripted news reports on a radio about a homeless man attacking a bystander, eventually turning into reports about mass rioting, than they learn about the outbreak, and eventually there’s an EAS Alert about a mutated rabies strain.

Nelson should also eventually add the ability for NPCs to do voice lines if it’s possible. Like a guy who mods NPCs can do voices for each of the NPCs to have unique lines for example. This would add an extra layer of depth to outbreak mode.

Pandemic Express probably has my favorite execution of this style of gamemode, it’s just unfortunate that the game’s community completely died