Are S.T.A.L.K.E.R Style exoskeletons too much?

I have been playing Stalker shadow of chernobyl and there is a late/end game armor type called the exoskeletons. They are expensive and rare-ish but they provide a lot of protection from bullets, explosions and allow the user to carry more weight.

So the question is? Is this too futuristic for unturned? 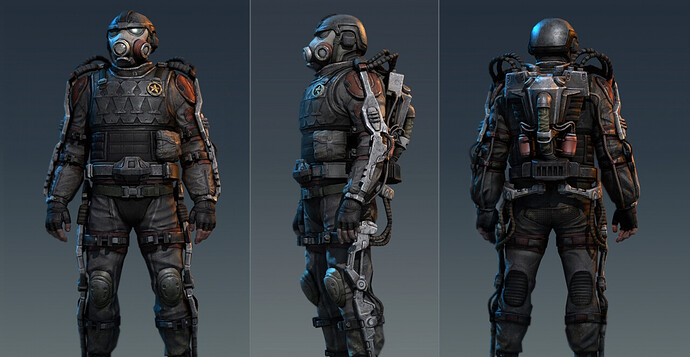 I’ve got a few plans to work some “basic” exoskeletons in as mods.

I don’t necessarily think they should be in vanilla though. Unless UII ends up being set a few years or more into the future, exoskeletons just don’t seem common enough that they’d be included. A UII alternative to Scorpion-7 seems like the best chance for something like that.

Although there are still plans to bring Scorpion-7 back in some way, in my personal opinion Excursions might be better if exoskeletons were a thing.

I personally believe survival games benefit from being a bit more outlandish since it doesn’t tie the dev down. I’d personally only like to see exoskeletons if they were extremely customizable that way everyone didn’t just get the best one and roll with it. Maybe they could have skill trees that could be unlocked by crafting upgrades? Some players might want more speed but that results in less armor, while another player might want more combat ability but that could take away from stealth. I guess I like exoskeletons as a way to get away from the monotony of the average Unturned lategame.

In my opinion, if ever added, vanilla skeletons should not be some kind of super advanced armor but more of a tool that reduces your stamina consumption, allow to lift more weight and similar buffs to your endurance, it would be quite hard to maintain those in good shapes tho and it would be nice indeed if they could have some kind of modularity.

Sounds more modded than vanilla, so it wouldn’t really fit in the basic game. It’d be a little too advanced for a zombie survival game.

I think they could play a cool role with lifting things or making your characters carrying capacity higher. We don’t know the exact time U2 will take place but I would say a safe bet could current to maybe 20 years from know. So if exoskeletons where to emerge they could be still very basic.

I don’t want to really see them be a combat thing, but rather a helpful utility. I like the theme Unturned and games like DayZ have. Current post apocalyptic zombie world with hunting rifles and modern buildings and the leftovers of modern military weapons. But I also really like the Scorpion 7 vibe unturned has. Everything isn’t Scorpion 7, but its still present on the map allowing for some cool sci fi stuff to be plausible. The game SCUM looks cool, but the vibe of the futuristic walking robots always throws off the immersion for me. I don’t want to see end game pvp being a guy with an exo suit jumping over walls.

I think a player could still use an exo suit in combat, and maybe it would lend some benefit to allowing him to wear heavy armor and run at a more reasonable pace. I remember Nelson some where along the line mentioned something about being excited to have light armor vs heavy armor loadouts and the roles they could play. Instead of this armor is just better. But I think we need to be careful with something like an exo- suit and never allow it to give a player super mobility above a normal player. Advantages from end game loot isn’t bad, but if it just stomps out normal players it could be. 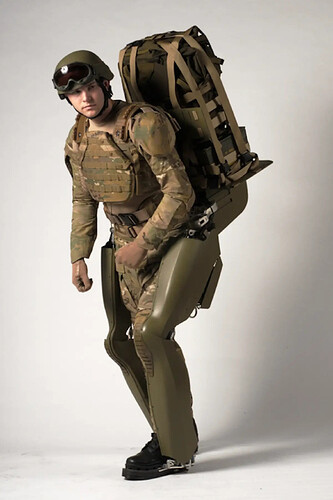 I know this dude looks kind of silly but I could see this being a rare spawn in a military, dead zone, or Scorpion 7 area. Its not something that allows you to jump or sprint faster, maybe it even reduces movement speed but allows for the player to carry more items as a weight system will be present in U2.

So even if a lightly geared player was to run up against another player with an exo-suit, the exo-suit would have reduced movement speed, and the lightly geared player could have more mobility. I could see the exo suit just being a nice utility for players to have more free room on loot runs, rather than a total buff to there stats making them super freaks. 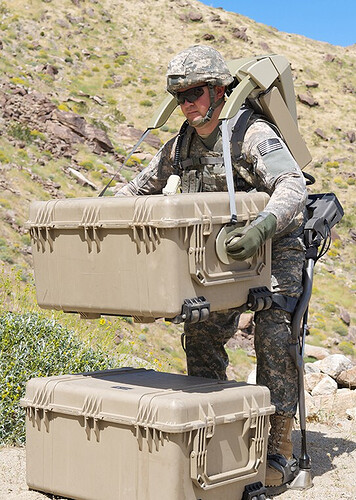 Also they don’t have to be all around PvP. Maybe something like this would just sit around base and be used to move things. We don’t yet have a official idea on how heavy items will work in U2 like crates, lockers, or rain barrels. If they work the same like in 3.0 by fitting in your inventory and just weighing a lot then this could just lighten the load of remodeling a room.

To me it would make sense that heavy items like these once crafted had to be placed or picked up and moved by hand. So you couldn’t have 4 rain barrels in your shirt pocket and just pick em all up at once. Or how would that work, would a rain barrel just be carried in your inventory and slow you. I think the visual of your character carrying a single heavy item makes up for the encumbrance, apposed to just moving slow for the sake of it.

I know DayZ has this feature with things like large generators and barrels. It doesn’t fit in your inventory but in your hands slot and you move at an encumbered state, while carrying.

When the feature of a weight system was brought up by Nelson, it seemed to be welcomed with open arms. It always confused me that the “Realism for realism sakes” crowd didn’t jump on this. Making things like loot runs and big battles even more stringent on carrying capacity rather than just inventory space. Cause the game was never really hurt from someone carrying 9 generators in there pants, it just didn’t make sense.

I am all for it and think it adds something, although it may be annoying to when you got lots of loot and walking slow. I think it can add a lot to armor and weapon loadouts. Heavy juggernaut with a shotgun moving slow, and a light armor quick movement speed for looting or long runs. As well make things like cars, exo suits or even maybe wagons a really useful item rather than just transport.

I like your idea.
I can imagine big clans and groups having dedicated “loot runners”, People that wear exo-suits and extract loot with their increased max load capacity while the non-exo people cover the runners and focus on fighting.
And a nice way to limit the exo to a utility role is that the hydraulic tank on the back could be damaged and rendering the suit useless until repaired.
One good thing about the exo would probably be that it allows the user to hit like a cargo train wielding a another train.
This means the exo would be very good at melee combat but it wouldn’t do anything special when it comes to a gunfight.

(sorry about my english if i made some mistakes)