REEEEEEEEEEEEE
I was alredy making a post about armor but anyways

Protects you but does not provide storage 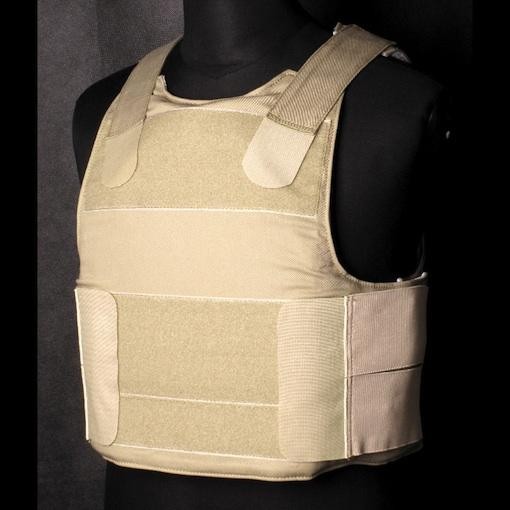 Provides you with space but no protection 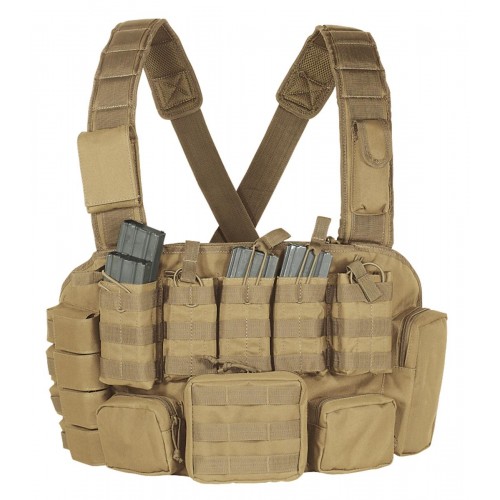 Provides both space and protection 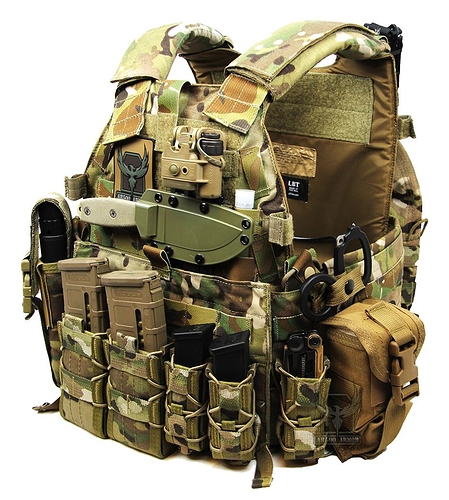 Armor certainly shouldn’t make time to kill extremely high, but it should definitely make you survivable, and make it so a newly spawned player with an ace can’t two-three shot a fully armored end game player without the end game player at least being able to take enough hits and live to fight back, especially if it took a huge amount of time to get geared.

could not agree more, sinc now anyone with a cobra can take down a fully geard player with ease if they are close enough

Really good post man (even thou im a little butthurt ovet it sinc i had one in the making, but i was to slow and took to much time to make it good xD)

When i say armour, you say 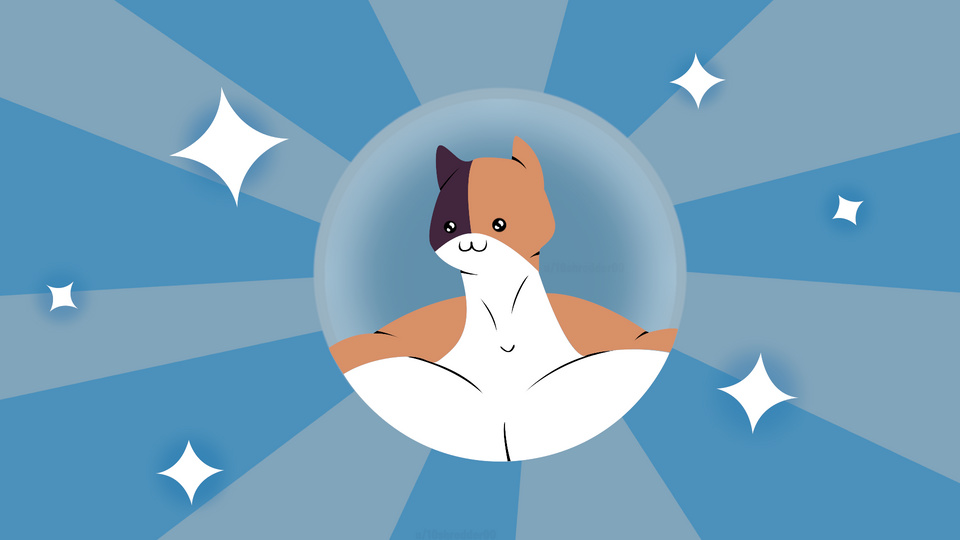 I’m down with everything but power armor is pushing the limits of imagination just a bit with built in stabilizers and armor lockdown. Not saying it wouldn’t fit in Unturned but maybe as a mod instead of Vanilla. Maybe instead of power armor there could be a bracing system to take the weight of armor off of your body and restore some lost movement speed. 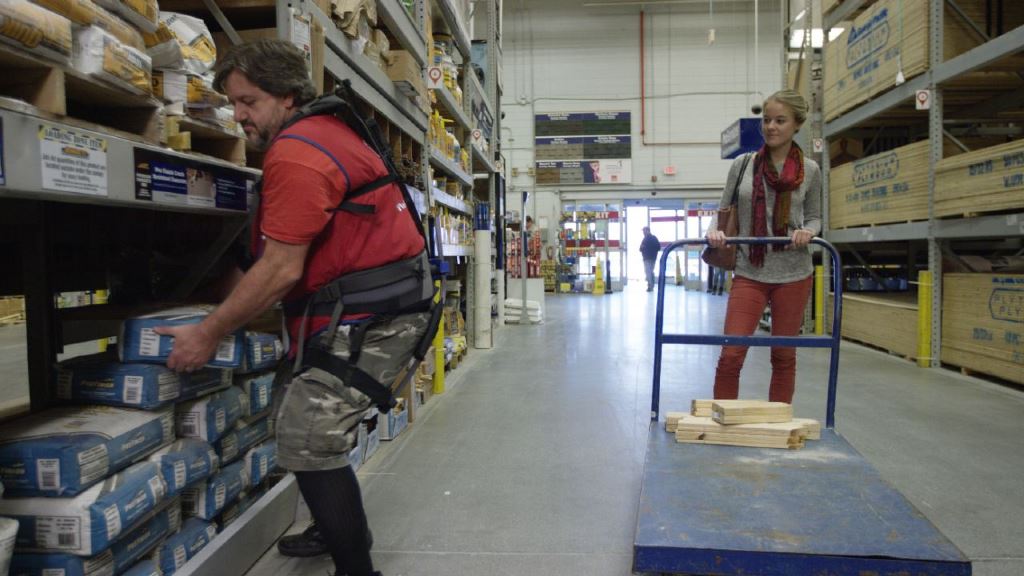 tbh, we do have working exosuits, and advanced military gear ect. We just dont have Batteries that are efficient at such a small size.

-We, as in this is military tech in America… which it could be far more advanced as the military doesnt really show much of what they have to the public.

I mean consider the fact that it’s been a long standing thing of Unturned to feature fairly futuristic stuff like the Shadowstalker (nvm the fact Nelson allowed the Focus guns in the game which I would say is pushing it a lot more in that regard).

A possible lore based reason for their existence is the Excursion zones. We’ve been told they’re abandoned “fortified complexes”, but made by who exactly? I really don’t think it’d be out of place to connect the Advanced armor with these zones.

@skoeldis I mentioned under Military armor a few examples for that, although I should have made it a bit more obvious that straight up body armor wouldn’t provide storage while rigs and proper plate vests would.

A good way to explain the power requirements of an exosuit as well as allowing it to fit into the game would be sourcing stuff from excursions.

I was thinking for more in depth lore, that some of the tech would have been recovered from these zones, hence some of it spawning outside of Excursion zones (mainly just the generic Exo set, undersuit, power cells, and other basic modifications) in high level lab areas, while the rest for the most part would spawn only in Excursion areas.

That way it’d be possible to get some of the Advanced armor stuff, but you’d be forced to do an excursion in order to find the more stronger variants.

I wear spec ops, because obviously statistically it has better stats. Just saying it’s a bit bad to go off and say “People” - inferring “everyone”

one of Fight fighter’s helmets purposes it to protect against failing debris. Perhaps in 4.0 falling debris could actually cause damage (for instance, raiding a base and a wooden wall gets exploded, and chunks of wood fall down upon you). Of course, other helmets could do the same. Just a minor suggestion to the overall post. Obviously other helmets could do the same as the ff.

Spec Ops grade armor would delve even further into customization, but also into diverse playstyles. Light, Medium, and Heavy would be the core armors. Spec Ops clothing (shirt and pants) itself could provide limited protection against small caliber rounds, in the form of it’s Heavy variant (at the cost of weighing a bit more and having less room). The Light and Medium variants would protect less but have more storage and weigh less, with Medium being a good middle ground.
Spec Ops gear would overall cover more of the player’s body, and the Heavy helmet would cover the majority of the head.
Tier 4-5.

Looking at the “Spec Ops” and “Military” sections instantly just gives me a feeling that the “Light” versions of vests or armor will simply be the meta. Thats just how I feel. Such versions will either be too buffed or too nerfed whereas everyone would use them or nobody would use them.

Vanguard Armor: Fairly tanky armor which enables a lockdown mode when a full set is worm, and an overall slightly better penalty for movement as you’re wearing a full set that actually locks in together properly.
The lockdown mode would completely cover the user’s head and body, at the cost of nearly cripplingly low movement speed, pretty much making the user a turret, and messing a bit more with vision. This would only last for about 10 or so seconds before the armor would have to recharge the ability.
Normally the user’s face would be at some level of risk, in the form of a visor which is somewhat weak and can be shattered to expose the user’s face. (bulldozer time)

OK, now we’re getting into some fallout power-armor sci-fi stuff. I think this suggestion was pretty good up until the “advanced” section. I can’t say much about the rest. 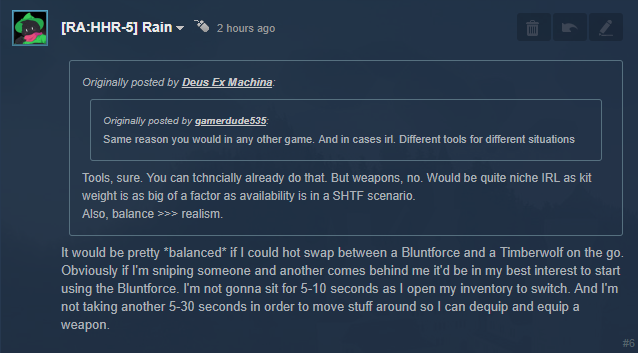 While arguing around on the steam forums after someone suggested that we should be able to have 4 main slots (he argued 2 for Primary’s, 2 for Secondary’s) I got the idea that, maybe, certain vests or what not could unlock or allow the use of a second Primary or Secondary slot.

For instance an actual holster on a police vest may add a second secondary slot, while dbngwoebeofbefb idk something on the spec ops vest allows for another primary. Something along those lines would give certain, or higher-tier vests / armor a better value or ability.

Ceramic Plates and trauma pads would be cool to have aswell. “Ceramic effective vs AP rounds. Traumapad removes all flinching or stun effect”

How about have it reduce flintching and stun effects

Nelson said that weapons and stuff was now attached to clothing items (i think in devlog 4). I also think that he said you could attach as many as will fit, ill try and find the quote.

EDIT: (it was in 6)
Wearable items with storage can be marked to support a certain number of featured holstered items. This is the replacement for 3’s primary and secondary weapon feature that showed on your back. In this screenshot the rifle is holstered to the rucksack and rattles around with it, but this feature will also be used for example to show pistols in a hip holster, magazines in a chest rig, or a sleeping back on top of a backpack.

Considering those won’t really be such a huge deal, removing them seems better. though there could ve varying levels of trauma pad: lvl 1 (50% reduction, lvl2: 65% reduction, lvl 3: 80% reduction and lvl 4 100% reduction aka removal. (The percentages are just example)
And it would also slightly lower damage to make it more usefull.

Everything could have levels like this IMO.
Maybe have different tiered vests that can carry more armor plates than others.

May i ask, if it isnt a huge deal then why even have it in the game. Having the really good gear remove it completly is unfair from my point of view, giving the geared players the option to remove it completly makes a really big gap between geard and semi geard players. Think about it, if a somewhat geard player starts shooting at a fully geard player the geard player can shoot back without any aimpunch and then he is most likely to win the fight because the semi geard player cant hit shit sinc he dosnt have a good enough traumapad
This situation is a little over the top and depending on how much aimpunch there is that might not happen, but still giving geard players the option to play without aimpunch and stun effects because of there gear is not fair and should not be the case

Hmm you are right about that, maybe have the max level just be 80% reduction, then decrease 20% per level.