@Effectism please no, this design is ugly for unturned II

it would be nice if there were a way the divisions weren’t visible, the blocky character looks like a pile of boxes.

But that would also need a makeover of clothes, Nelson your work is amazing but I don’t know if the game will move forward with so much emphasis on aesthetic details that being honest isn’t very important at the moment and there are quicker solutions.

@anonimoanbu The final model will not have all those boxes bro, its just a test to check it quickly.
I dont know why everyone thinks this is the model that will be in the game, it will have changes, improvements, its just the base of how it will look like.

Just remember that it’s a concept pretty much, so the finicky details would surely be touched on later

What’s more important is the direction the model should tak-

How about keeping the guy blocky, but increasing the detail anyway? 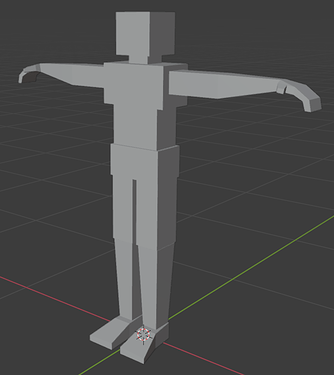 OH MY GOD WHAT IS THAT

Hey! This particular model could easily be taken advantage of and become a kind of turned the game, something like a mini-tank turned with bigger arms than normal.

Ok so I made a few renders with 3.0 hair, and the clothing. And not gonna lie, I absolutely love the new and improved posing possibilities that don’t look horrible. 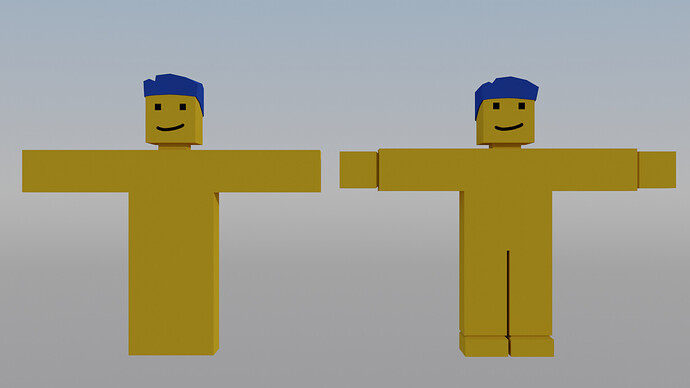 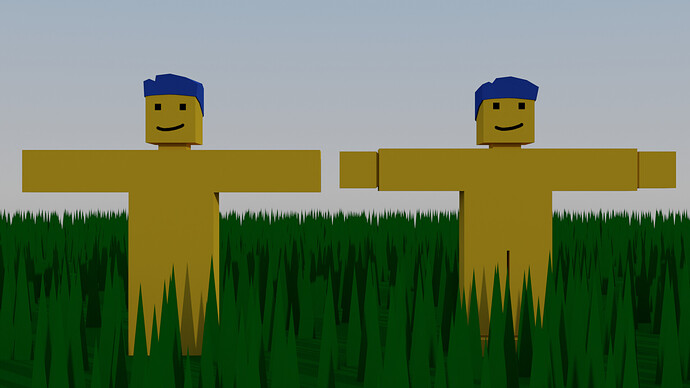 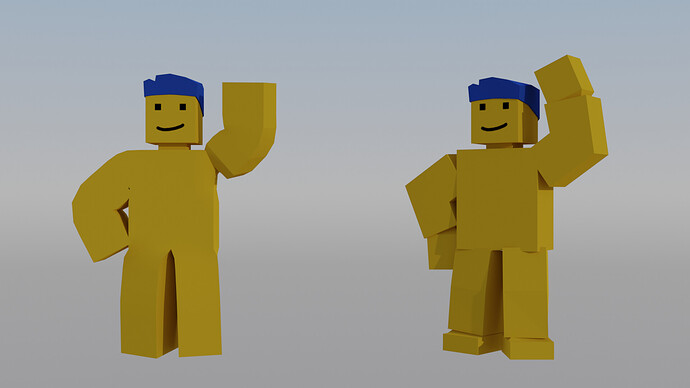 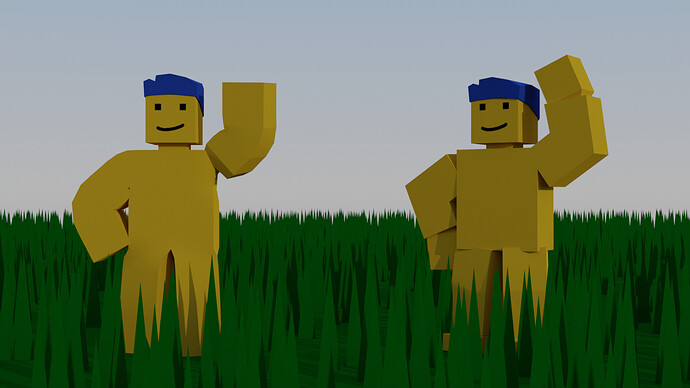 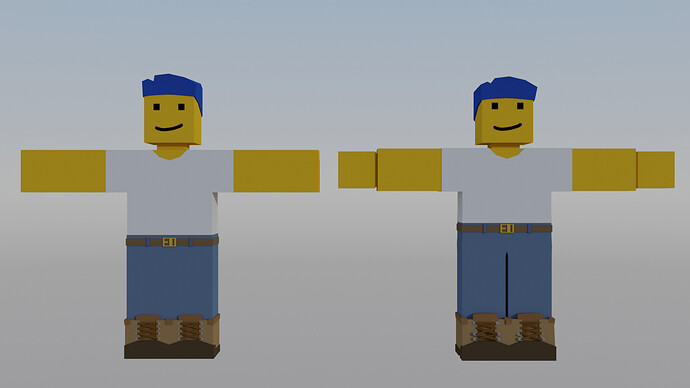 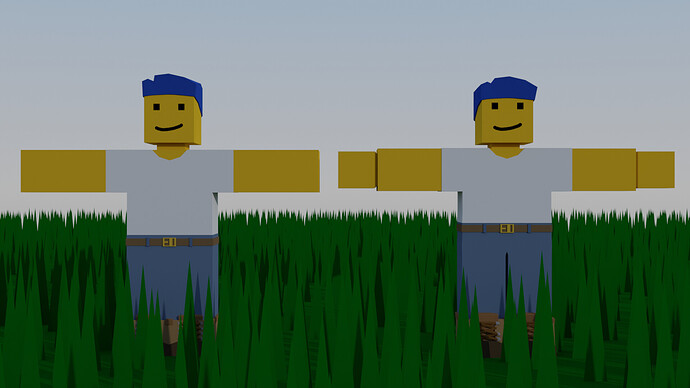 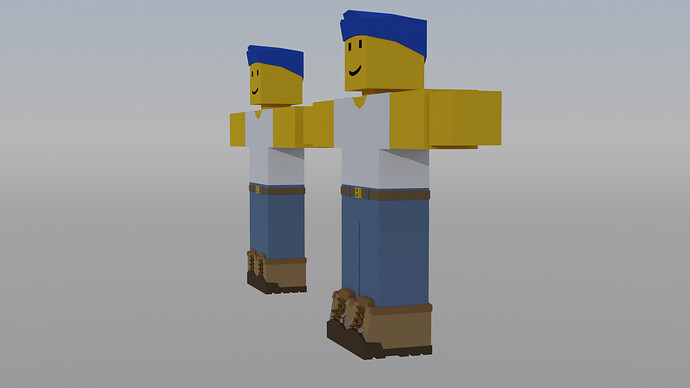 One thing I noticed that may be an issue with the now separated feet, any boots might not work too well unless heavy changes are made, I still stand by the shape key option I suggested before, but I guess we can see how it works with shoes/boots first if its truly necessary.

One thing I was VERY surprised by is how much better it suits Unturned compared to the one we have. (At least in my eyes) It could use some work, preferably with the body because it looks a little weird with it being a perfect rectangle at times, but I can see it working the way it is.

The clothing I just threw on the Unturned II models, and just slightly adjusted it, the legs of the pants and sleeves on the shirt will have to be separated obviously. These renders I made are just a test to get a better look at a more finalized look at it all working together. (Obviously the clothes and everything are subject to change and the hair is just the 3.0 hair but still)

I just hope I gave some better views on the new rig to help people decide whether its better or worse.

OH MY GOD WHAT IS THAT 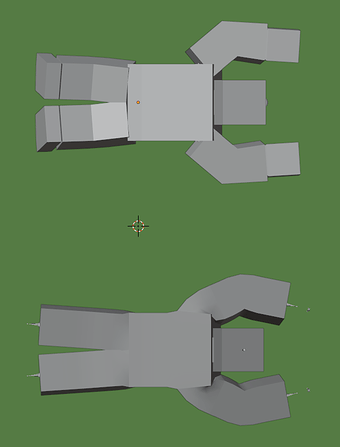 This looks really good! The arms are not at ALL how I made them out to be, sorry about that! I’ll try to be more careful now.

imo the bendy character is a relic, the blocky character model has so much room for more expressive animations, the only thing I dont like is how the hands are smaller than the forearm, looks kinda weird. 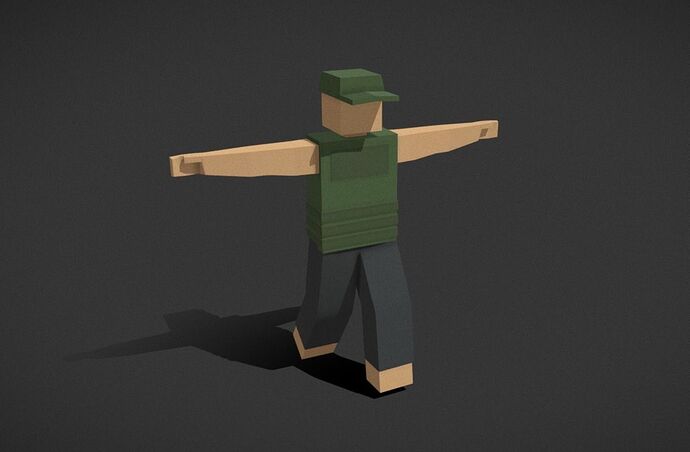 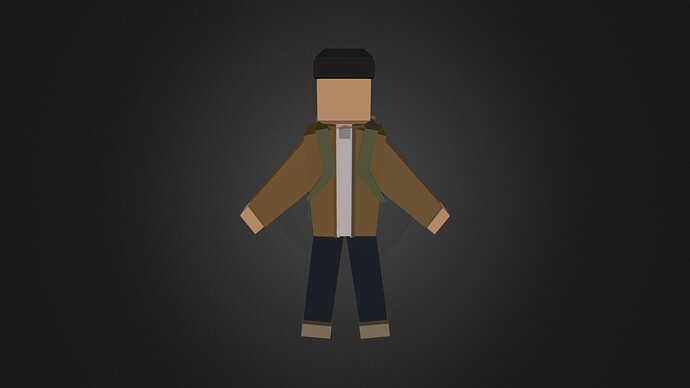 Ooo, I like that top one, it actually has fingers which I know a decent amount of people want. The question I’d have for it is how does it look moving its limbs around, seems like it may have the same problems of being bendy if I’m guessing right, though.

Taking this specific image.
I think the only thing that could be changed, on Blocky, is the width of the torso and arms, so he would be much better, in my view, than Bendy.

The arms and forearms could also be slightly thinner than the torso and perhaps thin as they come closer to the hands. Taking apart…

the only thing I dont like is how the hands are smaller than the forearm, looks kinda weird.

…this discomfort that the hand is much thinner than the forearm.

Of course, these are just details that will most likely be fixed if the Blocky model is chosen by Nelson.

i want it to be slim

Any way you could do a quick attempt at showing how different guns would be held?

More specifically, U3 Bluntforce which we all “love” the animations for.

I’m sorry but the “bendy” version is always going to be aesthetically and gameplay-wise better.
Infinitely better.

Tbh, i feel like it would be the best kind of style imo for an Unturned II character, sure it’s quite a departure from the original character but it wouldn’t necessarily be a bad thing, and to be honest, such a character appearance would be awesome for small body details like watches, collars, some clothing articles but it would also fit more with the more detailed appearance of some of the already added things (guns, houses, drones, etc…)

(Also it would be very nice for character customisation, having different haircuts, perhaps modifying eye colour in addition to skin and hair is just what i want. Now the best would be different size characters (taller or smaller, wider or thinner, etc…) but it’s likely asking for too much. 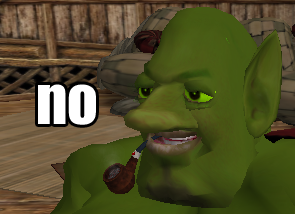 I like that top one a lot, make a bit more sense proportion wise imo.