I’d like to see, when players start getting a bad reputation from killing other players then certain NPC’s will try and hunt them down and kill them, like there’s a bounty put on them.

This would make it a little easier to control KOS on survival/RP servers (not completely, but it’d be better than things that sound as if they’d obviously make the game feel far less immersive and just piss you off).

I’m pretty sure this topic has already been talked about, but it’d be nice to hear some thoughts.

idk, I think that’d kinda ruin the good side of being good, if you’re hunted whether you have a good or bad rep

Being morally good for one side usually does the opposite to the other side. Whether if it’s directly or indirectly.

Having a good reputation is pretty much like saying “Hey raiders, I’m you but better.” To raiders. At least psychologically.

Back in 3.0, you can just kill a bandit and get a deputy rank. Easy as that, now I’m not sure if 4.0 will have such rankings. But if it is, then I hope it wasn’t that easy to obtain.

Imagine if you’re a raider. You can pillage some random folks. Sure, but that one guy whom does the exact opposite of what you did? You would feel the need to cease that being. If you catch my drift.

Besides. You only have to deals with raiders and bad players. You can still trade. You can befriended with strangers (and most npcs) and most of all you’re technically being respected psychologically.

Altho, that’s just in my opinion.

You forgot the catagory. Im asuming that this is for II, so I’ll fix that for ya…

I’ll rather, as a first step in A.I, just if they whould snipe you if you got withen range of there post/encampment.

Dynamic quests that are affected/caused by player actions would actually be pretty nice to see.

I don’t think that the idea of NPC’s hunting down players with a bad reputation is a good manner to deal with the Bounties subject. Also responding to @anon36099209 POV, I think this is how bounties should work:

Assuming that rep. system is going to be based on player’s allegiance or enmity to different NPC factions (on which it should be really hard, if not impossible, to keep good rep. with all of them at the same time), bounties should be set by factions upon players if they cause too much problem to a determined faction.

Also assuming that NPC’s will stay at their camp(s) and ocasionally patrolling around it within their territory, then it’s important to state that I think ONLY other players should be able to claim those bounties, unless this player has bad rep. with this faction as well. Knowing about both prev. points, to make this a good control over KoSers it’d also mean that there should be always at least 1 faction with which you lose rep. by just killing other players.

However, I think the same could also appiled if you’re too “humane”. Raiders can and probably wanted to kill some herotic survivors aswell.

IMO this is overkill and very unnecessary, since anyone can automatically become a raiding target just by thriving and having better stuff; as toxic as the playerbase currently is, either way you’ll make enemies even if you didn’t ask for them, and if you did thrive at the expenses of others, then even more. Making the game punishing against polite players by default would be seriously unfair and unbalanced having in mind that in 3.0 that already happens, without any extra grips nor encouragement such as bounties.

Now, let’s say that Nelson actually decides that NPC’s can ocasionally go after you and/or raid your base if you reach a hostile status with their faction… From the very logical sense, this shouldn’t be caused by being too “humane” in any way, since only toxic players say: “hey, these guys seem like good people… Let’s ruin their day

.”, and it would be OP if even AI decides to set disgrace upon you for just existing, unless there are NPC bandits that attacks others indiscriminately just as raider players do.

Raiders can and probably wanted to kill some herotic survivors aswell.

did someone say HERETIC!? 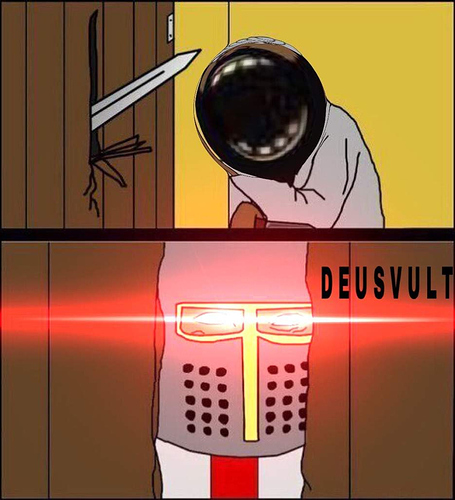 Yeah I thought it’s somewhat belongs to a soap opera rather than here.

But I’m not convinced that my idea is too far fetched either.