This will adversely affect the local tryhard population

Some guy will still find a way to blend in with the enviroment, the steam guide is already up

YO GREEN GUY, LOOK AT THE COOL BURNING ROCKS! 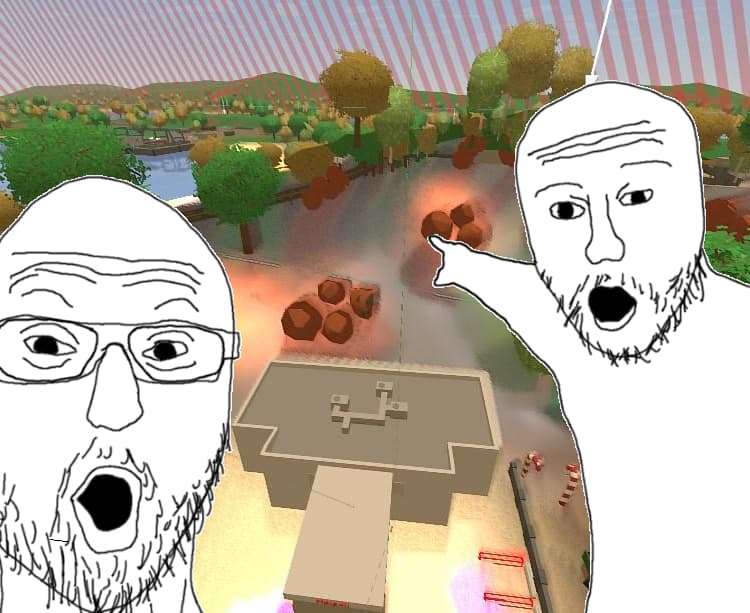 Got side tracked with other improvements, but step #1 of ? is mostly complete!

Picked up a few debug visualizations along the way

Since the new update is going to involve building overhaul, is there a chance we will see brick floors and roofs?

are sound effects possible when moving the camera to another point? it would be cool
(and it still doesn’t require modifying old buildings, right?)

Fixed (all?) exploits to do with stacking housing items and hiding barricades inside them

Building a base U3 Announcements

Since the new update is going to involve building overhaul, is there a chance we will see brick floors and roofs?

I do intend to add more building materials and shapes later down the line, but first need to replace the crafting system because all of the existing recipes are cluttered.

Building a base U3 Announcements

are sound effects possible when moving the camera to another point? it would be cool (and it still doesn’t require modifying old buildings, right?)

Oh, this was just the debug camera. This update is completely backwards compatible with existing bases and custom items, including glitch based with stacked walls/floors/pillars/etc.

Clip.prefab no longer necessary (removed from all vanilla prefabs)

Clip.prefab no longer necessary (removed from all vanilla prefabs)

Does this mean that “Clip” prefabs are entirely removed, and any existing ones are ignored. Or does it mean that they don’t need to exist, but if they do exist the game will still use them? I wonder as some objects I’ve made have some more complex scripts components on them, that I’ve removed from the Clip prefab in order to remove unnecessary components from the server side version.

If they are completely ignored, then does the game do any kind of optimisation to the Object/Resource prefabs to make it easier for the server to handle? (I don’t actually know much about how servers work, so this may be a minor concern)

Pre-existing structures with Clip.prefab explicitly need to opt-out, in which case the server strips client components from Structure.prefab

Fixed (all?) exploits to do with stacking housing items and hiding barricades inside them

Can an exception be considered for claim flags? This nerfs base-building severely. For example, with this change now you can no longer have an open interior (not divide your base into rooms/divide it into few rooms). This also facilitates griefing, since as soon as all the claim flags are gone, there is no barrier to spamming metal barricades to ruin the base, forcing the owner to waste precious raiding gear.

Additionally, speaking of griefing, will the building changes put an end to floor wiping? Y’know, when you destroy all the floors of a base, preventing the owner from ever fully rebuilding?

Hey Nelson, can we get brick structures’ HP highered to being twice as metal structures HP?

I know you discussed brick structures in this thread, and many players before has argued that Brick is only a cosmetic tier, you can find bricks randomly and craft them into a wall but you won’t make an entire base of that material because of the rarity and low HP- because it lasts only for 1 charge like any wood. It worth building wood bases, it worth building metal bases, but it’s not worth for brick if you’re not a fellow roleplayer.
SirAdy mentioned that, Unturned Podcast mentioned that. UP’s host cucuycharles even figured out a solution, which I bring here now.

Highering brick structures HP will make building into a separate tier, and a main crafting supply of this tier’s rarity will now be justified. Looted players will have a reason to go civilian locations with construction sites, rather than camp a military base 24/7.

This. Bricks are absolutely useless currently.

Either make bricks cheaper or buff brick structures. Bricks have only been a cosmetic structure type.

Claim flags are going to be changed in a future update to claim an area around all of the connected housing items, so having lots of hidden claim flags will not be necessary.

Building downward and floor wiping will not be handled in this update, but should be improved in a subsequent base building update.

While perhaps not a long-term solution: sure, for the meantime it would be a fun experiment to significantly buff brick housing items in this update!

Claim flags are going to be changed in a future update to claim an area around all of the connected housing items, so having lots of hidden claim flags will not be necessary.

How would having multiple claim flags not be necessary? What worries me the most is the griefing after all claim flags are destroyed, which is easier the less claim flags you have. Am I missing something?

Yes you are missing the entire sentence you are replying to.

No? My point still stands - after all claim flags are destroyed, anyone can place anything within the base. Unless that is somehow changed, having multiple claim flags, preferably hidden ones, is still a necessity.