We all know that U2 will have different calibers aka more specific ammo that can only feed into certain guns (NOT refering to ammo type as in effect or property, just dimensions of it),
as confirmed so far.

My questian is will these cartridges have specific stats that carry over to any weapon they get used in like damage and armor penentration as an exampel? Or could guns with the same ammo do notibaly more or less damage as another one like in 3.0? Or do certain stats of a cartridge always carry over and decide certain stats of a gun?

Tarkov just as an exampel do it like that, but it has a really wide variaty of ammo types mostly varying in damage, penentration and other smaller effects like muzzle velocity, accuracy modifiers, recoil modifiers, richochet chance, having tracer or not and amount of projectiles. All these factors are controlled by the ammo in the gun, so the meta is more about base stats, how many attachments you can have aka modability, aiming time, weapon and barrel lenght (affecting velocity, accuracy slightly and cqb handling). And yes I have played a bit of tarkov myself.

Having such a system can bring alot of depth.
But having this system may bring disadvantages if you wanna call it that. Gun variety may suffer if it’s not implemented well. Similar guns whit the same cartidge might feel like the same gun especially if modability is similar. If the selection of cartridges is low the variety possible will suffer aswell. But may also compicate things if there are too many.

More gameplay advantages is if a cartridge has specific stats it could make that speicific ammo very valuable, as already the case in Tarkov. A very good example is that in unturned 3.0, you may debate on what to use your civi ammo on. Maybe a Cobra or a Hawkhound. The cobra is more rapid fire but does less damage PER AMMO, whilst the Hawkhound would be a more efficent use of ammo but harder to use close up under stress. But in the end, you are using the same ammo for both of the two radically different guns???

If you had a specific rifle and pistol ammo the game would force you to use one or the other, it would make you value your ammo types since wasting rifle ammo on things a pistol could deal with could be considered a loss and make you wanna conserve rifle ammo for longer range and using the pistol for relevant tasks. And if this would be implimented well enough to create this kind of scenario it would add depth to ammo consumption in general.

.
Maybe I’ve been mumbling for too long, I hope this creates a relevant discussion. Thank you if you made it to the end of the post.

how many attachments you can have aka modability, aiming time, weapon and barrel lenght (affecting velocity, accuracy slightly and cqb handling). And yes I have played a bit of tarkov myself.

I am making a large post where it covers things like this. I think to see more variety in game play and balance between things like SMG’s, AR’s, and LMG’s these factors like mobility and your ADS is huge in a gun fight. Not just for your attachments but guns in general like an SMG being lighter, faster, and the ability to ADS faster over something like an AR that has its more mid range supremacy.

I am hoping for some cool customization of the firearms attributes through attachments and barrel changes. This is a feature in the new COD Warzone and I love it. Really the reason I still play the game is because of the customization I can do the guns. The biggest change to guns in that game is the barrel and allows for guns to change up there play style and use in a different way like you said affecting velocity, accuracy, and cqb handling. 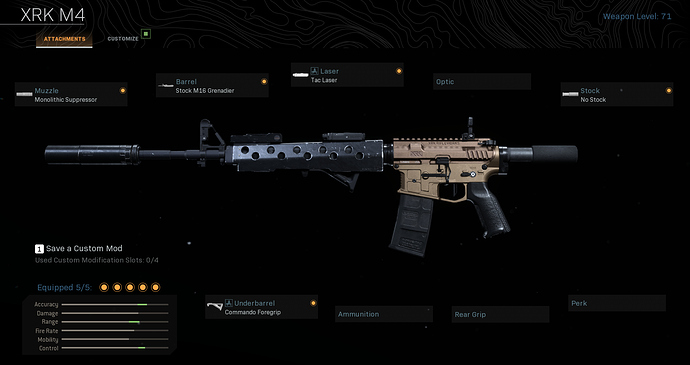 image1836×972 258 KB
(Removing the stock gives you a lot of mobility but increases your recoil, as well as the barrel reduces ADS as it is heavy but gives more accuracy.)

A lot of games like to claim they have EPIC customization with THOUSANDS of combinations to fit your play style, but end up being like 2 builds that dominate the rest. With Warzone although there are guns that are good and meta’s, but there is still room for lots of play styles to be viable. Be it that you want a lot of accuracy and precision with heavy barrels and long barrels and bulky grips. They slow you down but pay off for the accuracy, or maybe you want light and quick and give up a little accuracy. I have seen both builds be effective. 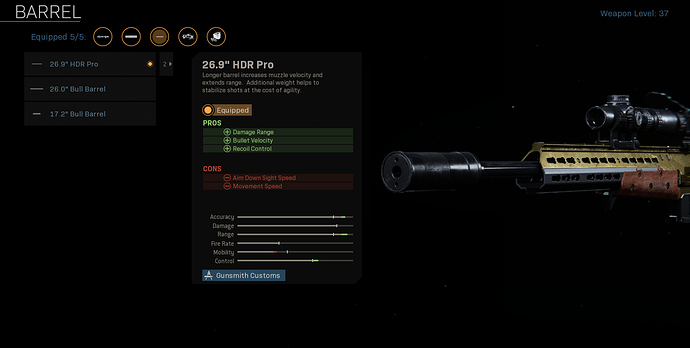 …I think that a variant of this would work.
My main issue is the fairly difficult balancing needed for this. RECOIL currently uses cartridge damage and a ballistics engine to simulate terminal and flight, but it’s somewhat inconsistent and fairly laggy. However, inconsistency is part of life, so…

Another issue would be balancing weapons so they’re all in good niches. I understand this isn’t “blocky ArmA” but… Let’s say this. Most weapons would generally deal the same damage and be fairly consistent in handling.

Most weapons would generally deal the same damage and be fairly consistent in handling.

If the damage is solely based on the cartridge.
Which it shouldn’t be. Cartridge has a play for sure, but there could be different grain bullets on the casing, or the bullet could be a different type (HP, AP, subsonic) etc. Then you have barrel length, smooth bore or rifled barrel.

If the damage is calculated solely on the cartridge, then you would have the the same damage when you fire a 7.62x39 from a carbine vs a full-scale sniper or simply a weapon with a longer barrel.
That would also make the 7.62x39 cartridge handle the same without having the bullet’s grain in mind.
You shouldn’t be able to snipe at the same distance as 123gr with 154gr, because the weight of it wouldn’t allow it and so forth.
I may have gone a little overboard with this, now that i think about it…

Indeed. I knew of this, but I was assuming that we were comparing say, a set of rifles chambered the same with the same ammo.