So as we all know, we have an almost useless skillset and character name screen, under the survivor section. This screen is mainly used by people to change their public names, but no one really looks into the skillsets. Skillsets in unturned are actually very useful when starting out, for example:

Spec Ops Skillset: Your sharpshooter and dexterity skills are increased when spawning.

Thief Skillset: Your sneakybeaky and parkour skills are increased when spawning.

Civilian Skillset: All your skills are unaffected when spawning.

I think the current skillset system lacks a lot, as well as the skill system. They’re both binary and dull, most of the time being just a pain in the back to manage. Why not opt out for something more customizable? Why not something you can say that you use all the time and you want it just right?

Well, I think I’ve got a partial solution to this problem. Advanced character customization and adaptive skills are a must for any survival game, and I think it will fit well into unturned.

What are the advantages of having in-depth character customization?

1. It’s always going to fit your preference.
With character customization, you can pretty much edit anything about your character, leaving you a lot of roomto play around with. Your character can be designed to fit your playstyle, and that, in general can make you feel more comfortable with your experience.

2. It throws a bit of spice into the mix.
With current characters in unturned, you don’t see much that’s different. All the characters look the same, everyone has the same stats, everything is dull. You can’t really distinguish a stealth player from an “all out guns blazing” player. Both people’s playstyles have to be crammed in one over-generalized character ability, actually putting both players at a disadvantage.

3. It avoids being “Jack of all trades, master of all.”
Today, you can just max out all your skills with a few points of experience, basically putting you at the god of everything. You can cook the best food, craft quality items, be an absolute master of stealth, run like a marathon player, all while being amazing at sniping. Something doesn’t seem right.

4. Reinforces realism
This feature would reinforce realism quite a lot, as it would always remind that you can’t be everything and that you need to team up to really survive the harsh apocalyptic environment that we call “Unturned”.

All and all, I think this is needed. Not a first priority, but it just buggs me. The current system doesn’t belong in a survival game and it can be treated as almost an exploit to a various extent.

I thought that 3.x’s skill system was very similar to what was in 2.x. Random Boost is not bad, but there are not many that are useful. I hope that the 4.x will have a revolutionary skill system.

not actually suggesting any potential improvements

Before I commented on the forums how it would be interesting to develop skills just through your actions during survival.

For example, if you never do agriculture when surviving. You don’t progress into that skill. Why should you? Same goes for all skills, they should develop over time with your actions in survival. You could for example get a head start in the character creation in the beginning. At the start, you could choose which kind of skill to have a head start in.

I am suggesting adding an in-depth character customization menu, with the ability to add fine-tuned attributes to your character, meanwhile affecting their skillset, or what they’re good at.

For example, setting the character weight to high would affect the running speed, but would give a low rate of exausting calories. If you so wish, you can change your character to have almost no mass but be full of muscles. Sure, they could run fast but soon they would most likely starve to death or dehydrate.
Concept images coming soon.

i guess i should’ve been clearer

This is something I was thinking about seriously, since skills system in 3.x is so… Idk, basic and unrealistic?

So, by starting out, making every skill only improvable via executing it rather than just selecting it in the “skills menu” and upgrading it, would be a much better and very realistic feature.

As a major suggestion, I was thinking roughly for very much time about something present in many RPG’s: there are about 4 up to 6 or even 7 base skills, and separately, there are the many other skills according to the role of the player and the actions that he/she will be specialized on.

In the hand of base skills, we could have strength, vitality, dexterity and intelligence (for example), and these base skills would be (forgive the redundancy) the base of a player’s ability, as there could be working this way:

Basic skills are intended to affect dedicated skills so that you’ll need to reach certain level on base skills to perform or achieve actions on dedicated skills. Examples:

And as there are so many choices of spec actions to do, there would be a wide variety of stuff to talk about this topic.

Some sort of thing I thought about too, is that it could be nice that there could be a lot more roles or “former proffessions and occupations pre-apocalypsis” eligible. As roles like thieving could be overhauled to be more wide and accurate (I could probably make a post about that), someone who has a lot of intelligence along with dexterity and is specialized on lockpicking doors, safes and cars but doesn’t parkour or isn’t sneaky at all, probably was just a locksmith before everything got mad and apocalyptic, LOL.

All this is just a big suggestion… I would like to read replies, so it can be discussed and considered 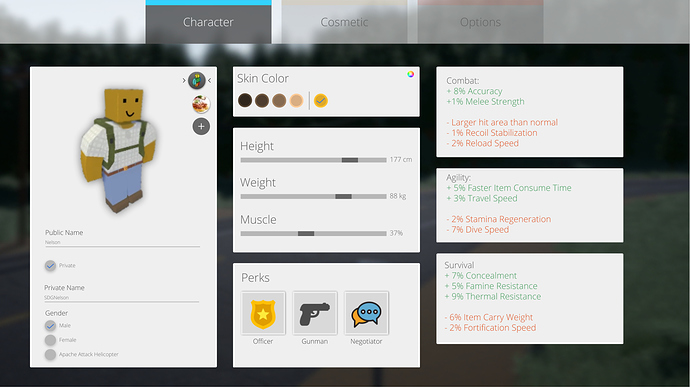 Edit: but I think interface should be darker

I like it, but the feasibility of Nelson actually adding different heights, weights and muscle doesn’t seem likely. He might, but it seems unlikely. Apart from that, the UI does look pretty good. Hopefully the skillsets don’t evolve so that there’s just one that everyone uses.

Cosmetics will most likely be a thing, as well as that, the top bar is a w. i. p. i guess.

(Simple english: I needed something to put there xD)