I think some holsters for handguns should hide the gun visibly Expect from frisks. Imagine the possibilities with this. Being a hitman for rp, murder like gamemode, Ect. Or simply killing those bandits that are sticking you up and took your main gun. Also your pants work as a holster for concealed handguns. But drawing your gun would take longer. And you gun could possibly fall out while running.

Edit: depending on the holster for it to work you need to wear appropriate clothing so it’s hidden.

I don’t understand your gun falling out while running, that would just seem annoying.

However, I would be fine with concealing handguns in things like overcoats, it will certainly add a lot to RP.

The only reason I added that was because I was thinking of possible balance. I also think it could be annoying, but otherwise people wouldn’t use holsters.

Concealed weaponry is actually rly smart, but would it take more time to take out?

Holsters are confirmed. Guns concealing into clothing would be neat though.

I was covering this in my now-by-far-forgotten post about clothing.

@ArcticArcher skills can help out with that. It’s still a really good idea.

I also think it could be annoying, but otherwise people wouldn’t use holsters.

Sacrifice concealability for faster drawing is far more balanced than your gun randomly falling out from your pants while running.

Another part of it could be that concealed holsters would have less space for larger guns or extra ammo.

Holsters physically worn under clothes would be concealed, and take longer to draw out. When worn above clothes, they draw slightly faster. (Maybe outer layers could loose durability faster as they are actually getting hit) Pistol holsters would only work for pistols, and would function as a “hotkey” to pull them out. (Possibly start the player off with only one fast equip slot)

Anything random just shouldn’t be in the game. Both you and you opponent are perfectly equal in skill level, both of you have glocks in your pants, he takes his out, yours falls to the ground, you get popped and lose because of a bad game mechanic.

A holster, you say? 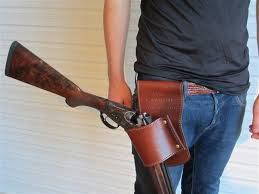 alright gamers, it’s time to sneak a gun into an enemy settlement and kill a guard so i can take his gun and commit mass murder in my block zombie game

oi, my post was a good idea. I offered a solution to that, but people ignored it.

This could be useful for pretending to be a fresh spawn instead of a fully geared man so people are less likely to kill me.
Along with concealing vests, of course.
Now you can go full gray man.

Hehe
Now we’ll have some more advanced weapon trades in the RPs
Just imagine, coming to an old alley in a town on some RP server
And dealer would take out some military grade pistol and ammunition out of his pants
._.

so wrong on all levels…

Concealed holsters only work when you have clothes on. A shirt at least.

You could always conceal it somewhere…else.

Concealed weapon needs to be at least somewhat visible for balance reasons.