CSGO has been doing holiday updates again for some wild reason (and thats not a bad thing) and the recent one adds snowballs into casual modes. I downloaded as soon as it came out (was playing with some mates when it happened) and loaded into deathmatch right away. We managed to bring the entire server onto the new militia map and just had a peaceful snowball fight while chatting for 20 or so minutes. The power of the Christmas spirit brought an entire public deathmatch server to peace for 20 minutes, That’s just beautiful. Have any of you tried the update yet? They added the Festive chickens and that is enough incentive on its own.

faster than they consumed zombies?

The power of the Christmas spirit

The Power of Christmas spirit is so strong…

…that Every 10 year old fortnite player would say: Gotta get those free Kills! 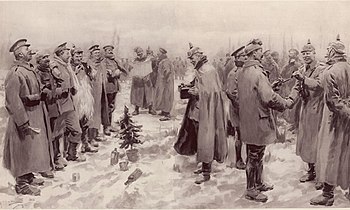 during ww1, the day that made history.

The lobby i was in that came to peace literally joked about that exact moment in history lmao.

What did I just read ?

what do you think?
The negotiation between Germany and France and them having that truce of course
its a Normandy miracle