-that item can be enabled only once to reset the remaining time
-can be easily craft the “refresher”
-works only on your/team structures
-are a limit radius of course
-is easily destroyed
-each time it is activated, resets the extinction time
-if it is not activated within 7 days, structures will disappear
-does not require gasoline
-they are not switched off or on 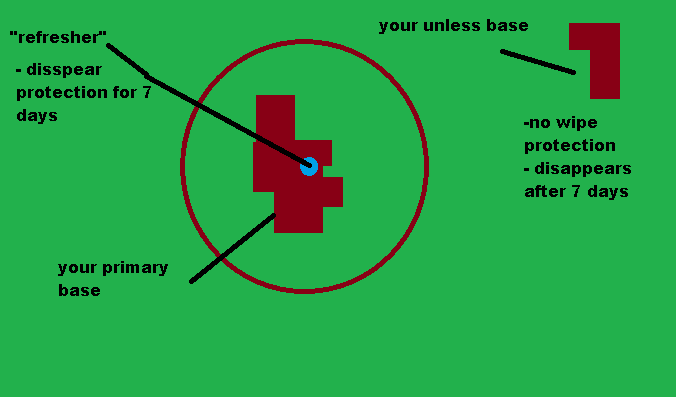 Sorry would help the zerg players in first day of wipe have the best gear in the game whitch is really bad.

Zerg is a group of players from like 5-10 players that totaly dominate the server.

the first day of wipe?
there will be no such thing
everyone will be able to protects the wiping base
disspear structure is done individually
I do not want to break all my important progress
other unprotected structures will disappear with me on the server

however teams of 5 are strong all time

come on guys what do you think?
if it does not show interest I do not think we will have this system
if you make a strong base come finally, and the server is slowed by useless structures (case wipe).

Not friendly for having multiple small bases, current default unturned base wiping system is a lot better.

This is counterintuitive in almost every way imaginable, and you just threw solo players under the bus

While I agree with you on that, a balance for this could be either making the player who placed it is the only one who can “reset it”, and of course disallowing more than 1 in th the same radius

Unnecessary imo
As J said, it would make teams overpowered and solo players done for 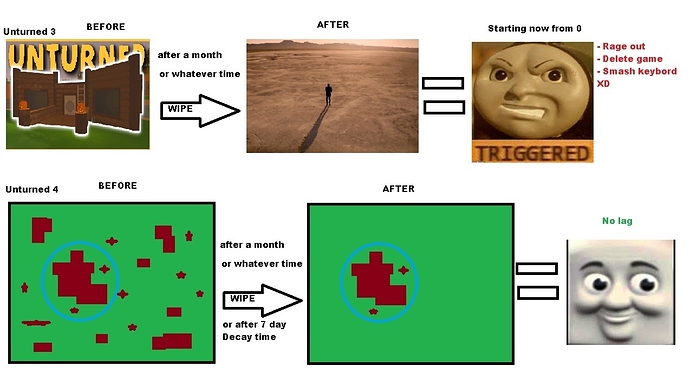 we can balance at all times:

Thanks for the suggestion with balance (Vizard)

It’s a great idea to help the game!

Why not just have the reset timer set to 1 month and it resets everytime you login to the server?
Because if it’s easily built, then everyone will be making these in unfinished bases and map-made buildings.
Because if someone has went off for more than a month, then it should be bye bye because the server has to keep on running instead of wait for that 1 person who made a base and disappeared for 3 months
That timer can also be reset if your clan mates login as well

excuse me, but that is a bit too much. Especially this part…

decay will occur even if you are on the server

it’s a bit overkill because even when you’re out building and expanding your base, all of a sudden it disappear. wouldn’t it be much simpler to just have the timer reset whenever you join the server? 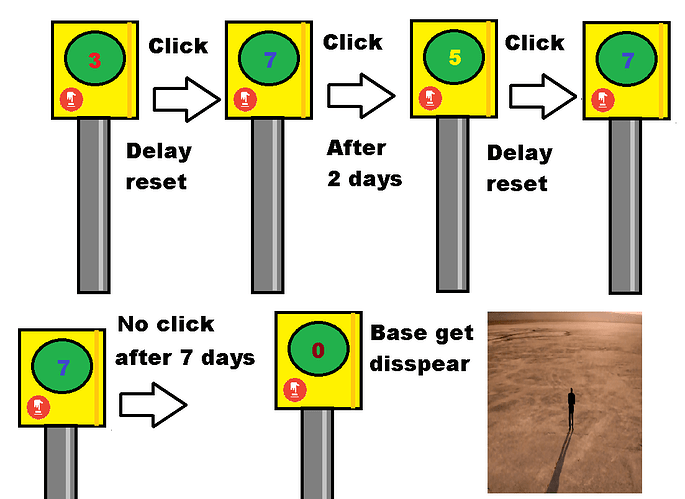 Unturned 3 .
this is the biggest problem.
players build more unnecessary bases, structure.
if the players are always on the server, the barricades do not disappear (create lag, cause total wipe).

Very rarely you see active players having random structures around. It’s always those who leave for months and leave the server full of their shit lying around. Because the ones who are active would be too busy making bases to protect themselves (for the most part)
So the refresher wouldn’t serve much of a purpose and for those younger, it wouldn’t make much sense since the structures become server sided and the global timer affects every structure, so having a specific radius that doesn’t get affected by it won’t be that easy to code so it won’t be worth that effort especially if it’s easily craftable

kylie your age?
your vanilla hour?

is izi nelson make the system

It’s pretty understandable by many that your idea is pretty unnecessary. No solo player wants to be disadvantaged, especially if one has like a 1-2 day break which can happen often

If barely anyone agrees or likes your original post, you should be thinking about the flaws of your ideas. Preferably when noone attempts to improve/reconstruct your idea.

I assume you don’t know much about coding games, but to make it easier for you to understand, the wipe is a global command, as in it affects everything on the map that wasn’t made in the editor. This command is server sided, which means it affects the entire server. The “refresher” is gonna be client sided, so it’s not gonna be easy to code an item that limits the global command.

Also, I know that people only make another base if their first one was raided. Which won’t really cause any lag. But if you’re looking at a bombartment of raided bases, the owners would either have salvaged it or left the server (aka, wiping the structures automatically) because no one is gonna waste so much time making random structures and putting them in random places if they’re not willing to stay. It rarely happens. So having the regular wipe without the refresher would be much simpler, and far less time consuming

(FACE PALM)
that is, you mean that after 1 month of time in my base it will be deleted with one command (is suck)
I would like to keep my permanent base.

Yarrrr :I do not want to take from 0 after a total wipe, this is the disadvantage.
You can not abuse the “refresher”
I can not maintain a permanent basis due to deletion (2214 hour vanilla only)