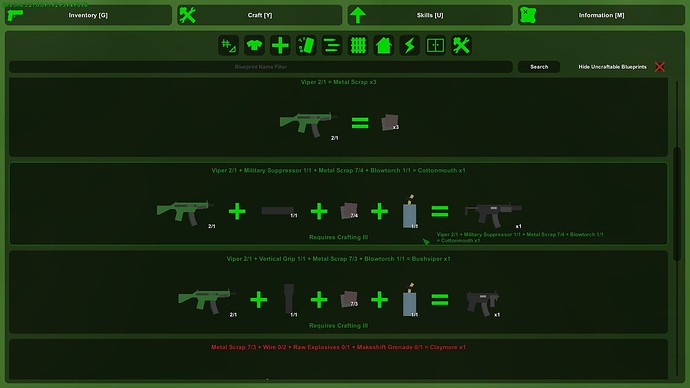 Crafting1600×900 120 KB
Should be self explanatory, being able to craft other variants of guns would be an amazing addition, a great example would be the viper, as shown here. The viper (MP5) could be crafted into the MP5SD or MP5K variants. We already have it for the masterkey, why not make more?
Other Examples include:
-Being able to craft a Bluntforce into a Serbu Super Shorty.
-Crafting an Eaglefire into an M16
-Crafting a Cobra into a Glock 17
-Crafting a Nightraider into the normal G36 with the built in scope.
What do you guys think?
Captain.Stars October 31, 2017, 3:00am #2

Probably not, because all the sawed off is doing differently is that it is literally sawed down version of the masterkey. You arn’t changing anything internally.

I know, its just a step in the direction of weapon variants.

Don’t think this is needed. We have enough guns as is. And being able to make more just won’t make it fun because there are more weapons than there are resources.
Plus, isn’t the Cobra already supposed to be a Glock 18?

Well I mean it could work, but I think having it come with new attachments is a bit odd. You also have to remember the sawed off’s big appeal was that it was a craftable secondary shotgun, crafting an Eaglefire into an M16 doesn’t really have the same appeal (besides an Eaglefire is an AR-15, so I’m not exactly sure how that would work)