So I know bullet velocity has been brought up a lot already in discussions. But I wanted see what people think of the current bullet travel speed in the beta and wondering if anyone else thought it was a little slow. I mean its still moves pretty fast don’t get me wrong but I noticed shooting at the moving targets in the shooting lane or shooting players I had to lead my bullet a little far in front of my target, more than what felt natural at close to mid range.

I was shooting at a player no more than 25m in front of me with the Eaglefire and I had to place my red dot far to the right of him as he was running left. I am all for ballistics and skill involved in gun play with judging bullet travel and range but I was wondering if anyone else felt it was a little slow. Felt like i was leading the bullets in front of him so he could walk into them rather than pointing and aiming (for that range).

I would like to point out tho that I really really like the bullet range guns can fire at now and it feels very natural. Where in 3.0 sometimes I felt like I was firing a paintball gun. 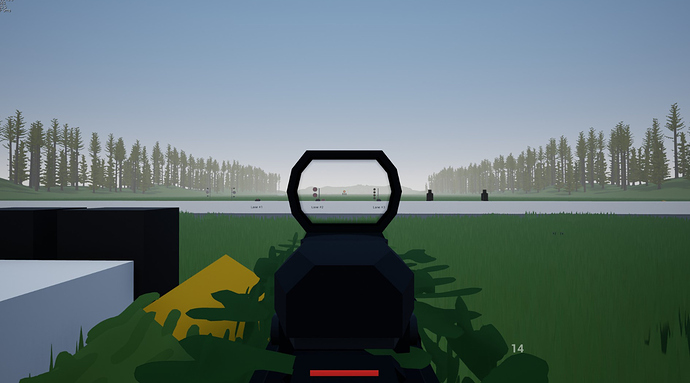 And one more side note, does anyone feel like the bullet tracers are a little THICC. They seem very bright and large.

And I know this is the beta and not the final form and all is SUBJECT TO CHANGE. But was wondering what some others thought. Maybe I am just crazy idk.

I measured the approximate bullet velocity in the past although I don’t have my measurements anymore. If I remember right, the Eaglefire definitely has a lower bullet velocity at a distance but there also appeared to be some minor variation with it. The sniper rifle usually tended to get the same results from my measurements.

I’d like to say that the need to lead your targets at close range would be more to do with delays between trying to shoot and having the round actually fire although I’m not entirely sure about it and could probably record some tests to see just how accurate that idea is. It’s somewhat easy to consistently shoot those small spinning targets though if you take your time.

If I remember right, the Eaglefire definitely has a lower bullet velocity at a distance but there also appeared to be some minor variation with it. The sniper rifle usually tended to get the same results from my measurements.

Are you saying the bullet would slow down over travel, cause that would be cool. Idk if thats how it worked in 3 or if the bullet speed was constant. Having it come out faster and slow down as real bullets do would make gun play awesome.

Know that I think about it yes the bullet seems to be leaving the rifle slower than expected and its probably that compared to the actually speed of the bullet. I remember firing the sniper on those moving human targets on the shooting range and noticed the bullet seemed a little slow to exit the barrel, or I was having to compensate for that when aiming.

So maybe the time between firing and the bullet leaving the barrel needs to be tweaked and not the actual speed of the bullet. I know even in 3.0 at close to mid range I never really had to lead my aim to compensate like in the beta right now.

But overall the gun play feels a lot better in the beta already I just thought I would bring this up. Thanks.

Are you saying the bullet would slow down over travel,

Not necessarily saying that but if they do, then my calculations in the past wouldn’t be true for other distances. I used a target at maximum distance when I was testing it in the past. Was trying to determine the number of frames between the first sign of shooting the gun and the round impacting the target.

The bullet drop in this is quite bad, not as bad as 3.0, but still very unrealistic and annoying. 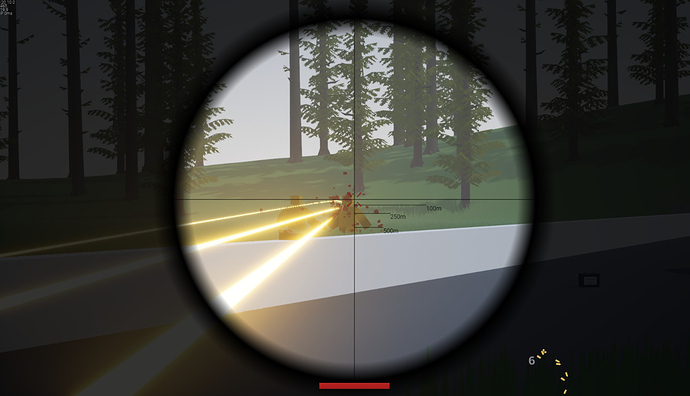 I took this screenshot while walking (strafing) right in a straight line while in full auto spray and I think it makes the point of the post clearer. Just in the time it took for me to walk you can see the bullets from when I fired still in the position I was standing.

Maybe this is just an illusion as my hits where on target, I think it might just be the tracers length. But thought I would bring it up as it looks a little unnatural. Was wondering if this was intentional or just a placeholder effect for future tweaking.

The bullet drop in this is quite bad, not as bad as 3.0, but still very unrealistic and annoying.

I think bullet velocity (decreasing drop) could be bumped up a little from where it is but for the most part I am pretty happy. I too felt this way when first getting on, but changed my mind a little when I moved the car out to the targets at 500m and really say how small the car was from 500m.

I feel like the scope’s 100, 250, and 500 could be adjusted as I feel like 500 and 250 could be closer (to the top). Or at least 250 could be closer to 100 and as the bullet travels farther it loses momentum making the jump to 500 further when it loses momentum. Also this is an open field, maybe a scenario with buildings and other objects targets will seem farther at 500m. To me it looks like 250 is right in the middle of 0 and 500 meaning the bullet has constant bullet drop. If it wasn’t I think 250 would be closer to 100.

Also maybe again its just an illusion but using the dot sight on targets far like 250 and 500 barley feels like I am applying drop, feeling more natural to other games. When using the scope I feel I am compensating more for drop. Personally I feel the game would improve with less bullet drop, like you said making it a little more realistic. I think this might be a case where realism for the sake of realism could be better for the game. On a side note tho I really like the satisfying feeling of shooting the guns and reloading them as it feels really good, and seeing the action move in the case of the sniper.

I also don’t want to seem like I am crapping on the bullets drop as I am still quite pleased to see its shift away from 3.0’s. Thought I just bring it up for discussion and thought.