Dual Wielding could be interesting in unturned. It’d be one of those features that isnt entirely needed or widely wanted, but could be interesting. Pistols in 3.0 are not super useful as you go up the gear tiers, and this could definitely be something that remidies this.

Dual Wielding wouldn’t be hard to balance, seeing as in the early game most players wont have the ammo or the guns to dual wield. You’d be doubling your damage output and firerate, but also the recoil and reload rate. Not to mention accuracy, because you’re managing two guns at once. You also wouldnt be able to aim them, providing even more of a debuff for using them.

But why use dual wielding at all? Well, dual wielding not only looks cool, but it gives a use for weapons that usually arent used at higher tiers, because they have a lower firerate and lower damage. But one of the strengths of pistols is their low recoil and availibility. So you take this and combine it will dual wielding and you have something that makes more sense at mid tier gear.

Dual wielding is certainly not something that needs to be in 4.0. It’s got a smaller niche, and it presents a few problems, (two different guns with different firerates, new animations required) but it makes low tier weapons viable with a bit of extra effort required on the players part. I still think it could be cool, as I want ro be able to use weapons with the teklovka but other than in rare circumstances or fighting zombies it just seems not to be a good choice. And yeah, that kind of makes sense. You’d obviously want to have the best gear and most damage, but giving players options is sort of what makes unturned playable for so long.

It’s already on the Trello as a potential addition, as far as I’m aware.

This is already on the Trello, and also dual wielding would have to have significant disadvantages to balance the absurd DPS that would result. You’d probably need an accuracy and recoil debuff, plus you can’t aim down sights or use stamina attacks.

I should have clarified, I wanted to discuss how it could be implemented and why.

I would think dual wielding would be useful when you could still have a one-handed weapon out when performing certain tasks, like eating, so you’d have a good chance of still defending yourself when you get ambushed while doing something. 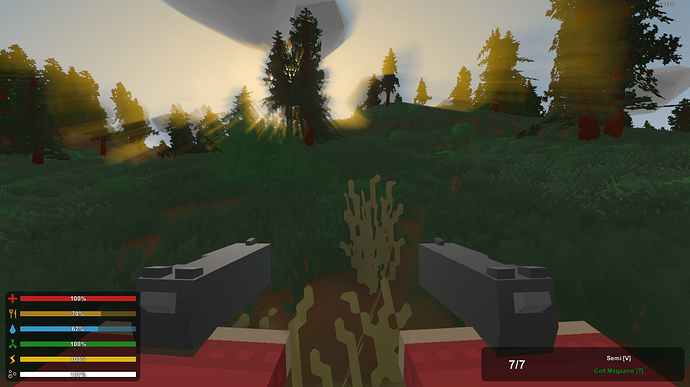 Bad idea. In real life, there are often people who use 2 barrels? Western…

But, of course, it would be less acurate and have a huge recoil

Craft akimbos? This doesn’t make any sense. You must have some shooter skiil to use it, not craft a gun.

He’s referencing an old post that is in reference to Unturned 3. If dual-wielding was added to Unturned 3, it would’ve most easily been done via crafting two guns together.